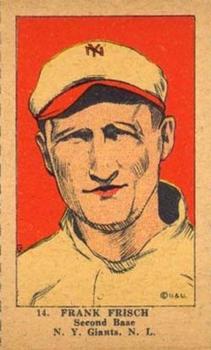 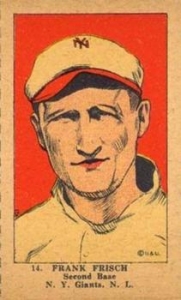 The New York Giants were once again in their familiar position of first place in the National League. John McGraw’s bunch were a dynasty in the early 1920s, winning back-to-back World Series titles against their crosstown rival New York Yankees in 1921 and 1922. In 1923 they saw the Yankees finally have the upper hand in the rivalry. Now the Giants were on top again, but leading Brooklyn by a paper-thin half-game margin with 17 to play. The Giants had just suffered a lackluster 7-2 loss in Brooklyn that kept them from gaining any breathing room in the race. The Giants were 82-54, the Robins 83-56.

The Boston Braves were not thinking about breathing room but about wrapping up yet another awful season. Eight times between 1920 and 1930 the Braves finished seventh or eighth in the eight-team National League. At 48-88, the Braves were in eighth, 34 games behind the Giants, who were probably grateful to see the cellar dwellers come to town.

The visitors were starting Johnny Cooney on the mound. Cooney, who was 6-7, had beaten the Giants just eight days before, getting the complete-game win with only three runs allowed despite 12 hits and four walks. Cooney had Boston’s best ERA (3.18) that season among starting pitchers with more than six starts and had split his season between starting and relieving. His 3.6 WAR pitching statistic shows he was a victim of poor support around him. Virgil Barnes, his Giants opponent, had a similar ERA to Cooney (3.24), but the talent around him provided him a much nicer 14-9 record.

A small Wednesday afternoon crowd of 8,000 turned out at the Polo Grounds for what was the first game of a doubleheader between the two clubs. Future Hall of Fame umpire Bill Klem was behind the plate, while Frank Wilson handled the field. The day was cool, with the high temperature in New York City hitting 61 degrees.1

The Braves managed a single but nothing further in a scoreless first inning. The Giants jumped to a 2-0 lead when Frankie Frisch singled and Ross Youngs homered to right. High Pockets Kelly doubled and scored on Irish Meusel’s single to give the Giants a 3-0 lead. Hack Wilson walked and the runners performed a double steal. Hank Gowdy drew a walk to load the bases, but they were stranded. The Braves managed a hit but nothing further in the second.

The Giants poured it on in the third. Meusel singled and zipped to third on Wilson’s single. Travis Jackson grounded to third but was safe on a wild throw by Ernie Padgett that allowed Meusel to score. Gowdy singled to score Wilson and make the score 5-0. Boston manager Dave Bancroft pulled Cooney and in came Tim McNamara. A sacrifice moved the runners up and a fielder’s choice scored Jackson. Frisch laced his third single in as many trips to score Gowdy, and Youngs walked to load the bases. Kelly fouled out to first, but Meusel singled to score Heinie Groh and the five runs in the inning gave the Giants an 8-0 lead.

While McNamara retired the first two Giants batters in the fourth, he allowed singles to Barnes and Groh and then a home run to right by Frisch, his seventh on the year and his fourth hit of the game. The Giants led 11-0. McNamara was pinch-hit for, so in the fifth Joe Muich came in as Boston’s third pitcher. Muich had been purchased from the Dover (Delaware) club of the Eastern Shore League, and had pitched well in his major-league debut, throwing 4⅔ innings of scoreless relief against Brooklyn. Kelly reached on an error by Padgett and moved to second on a wild pitch. Wilson singled to score Kelly and Freddie Lindstrom, pinch-hitting for Jackson, also singled. Gowdy slammed a home run to left to add yet another three runs and extend the lead to 15-0.

McGraw saw ample opportunities in the sixth inning to rest some starters wearied by the tight pennant race. Grover Hartley went in to catch for Gowdy. The 35-year-old Hartley began his major-league career with the Giants, being let go in 1913. After two years in the Federal League and two with the St. Louis Browns, Hartley had spent the last seven years in the minors with Columbus of the American Association and had been re-acquired by the Giants just four days before. Lindstrom stayed in the game to play second with Frisch moving to shortstop. Jimmy O’Connell took over for Youngs in right field. The Braves in the sixth managed only a single by Casey Stengel, who was stranded. In the bottom of the inning, Frisch stroked his fifth hit of the game, then was forced at second by O’Connell. Kelly tripled, scoring O’Connell. Meusel singled to score Kelly. Lindstrom tripled to center, scoring Wilson, but Lindstrom was out at home. The extra three runs gave the Giants an 18-0 lead.

In the seventh, a young Bill Terry, his Hall of Fame career just getting started, replaced Kelly at first base. With two out, Groh walked and Frisch singled for his sixth hit. O’Connell tripled both runners in to give the Giants a 20-0 lead.

Walt Huntzinger now took the mound for the Giants, and the Braves had their best offensive performance of the game. Herb Thomas, Wilson, and Stengel each knocked out a single and the Braves made the score 22-1. The Braves loaded the bases in the inning but could go no further. The Giants still weren’t done in their half of the eighth. Meusel’s double and singles by Wilson and Hartley brought another Giants run home. Huntzinger’s single scored Wilson with their 22nd run.

Frisch had a chance to be only the second major leaguer at the time to have seven hits in a nine-inning game. Only Wilbert Robinson of the 1892 Baltimore Orioles had accomplished a nine-inning 7-for-7 game. Groh, hitting ahead of Frisch, made sure he didn’t hit into a double play by laying down a sacrifice bunt with a 21-run lead so Frisch could have a chance. For whatever reason, Frisch decided to try to bunt for a base hit. It didn’t work, as Muich prevented history by scooping the ball and throwing him out. The Fordham Flash instead is tied with dozens who have had six-hit performances. (Rennie Stennett of the 1975 Pittsburgh Pirates had a seven-hit game.) Meusel had five hits in the rout.

The game ended as a 22-1 win for the Giants in 2 hours and 10 minutes. The Giants finished with 27 hits, 14 of them off Muich during his four innings, by far the worst pitcher of the day. Muich would have one more appearance in his brief major-league career of just nine innings. Boston’s run in the eighth was its lone run of the day; the Braves were shut out in the nightcap, 8-0, completing a day that the Boston Globe called “an unmerciful double drubbing.”2 The Giants outscored the Braves 30-1 and outhit them 36-10 in the doubleheader. The “glorious feast,” appropriately labeled by the New York Times, was not solely the responsibility of poor pitching. “They were no shining apostles of the pitching art,” the writer said of Cooney, McNamara, and Muich, “but they would have had to be, considering the sieve-like support behind them. The Braves were full of errors and faulty work all afternoon. The infield was not only wobbly, but it failed to stop grounders that should have been checked but sailed through for clean hits. Bad fielding and bad pitching are a baseball combination that has been known to yield even more than thirty runs in the course of an afternoon.”3

With the two victories, the Giants moved one game ahead of Brooklyn, which beat Philadelphia, 5-1. The Giants would lose their next game, to St. Louis, while Brooklyn won, creating a tie. But Brooklyn would play a mediocre 7-6 the rest of the way, while the Giants went 9-5. Third-place Pittsburgh got hot at the right time and made the race interesting, trailing the Giants by only 1½ games before coming to the Polo Grounds for a three-game series. The Giants swept the Bucs and finished 1½ games over Brooklyn and three games over Pittsburgh. The Giants would lose in seven games to the Washington Senators in the World Series.

In addition to the sources cited in the Notes, the author consulted Baseball-Reference.com, Retrosheet.org, and “Banny Back in Game but Tribe Is Twice Drubbed by Giants, 22-1 and 8-0,” Boston Herald, September 11, 1924: 15.