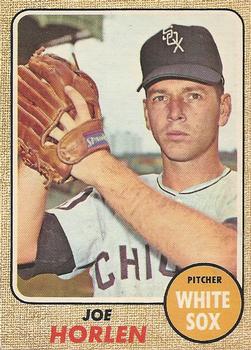 Joe Horlen “turned the White Sox’s darkest hour into a glittering personal triumph,” gushed Chicago Tribune sportswriter Robert Markus after the right-hander’s stunning no-hitter against the Detroit Tigers.1 “[I]t was the biggest game, the toughest spot, the White Sox were in all season,” opined sportswriter George Cantor in the Detroit Free Press.2

The 1967 American League pennant race was one of the most memorable in the history of the junior circuit. On September 6 there was an unprecedented late-season four-way tie for first place, with the Chicago White Sox, Detroit Tigers, Minnesota Twins, and Boston Red Sox each six games in front of the California Angels. The White Sox, who had held sole possession of the top spot for most of the summer, had a chance to make a statement when the Tigers invaded Comiskey Park for a four-game series beginning on September 8. However, skipper Mayo Smith’s bunch derailed those plans, taking the first game, 4-1 and then inflicting a soul-crushing defeat by scoring seven runs in the ninth inning for a dramatic comeback victory, 7-3, in the second contest. “Our team was down Saturday night,” said Horlen as he prepared for his start on Sunday. “That was the lowest I’d seen them all year.”3 Tightly wound Pale Hose pilot Eddie Stanky was on edge: “I didn’t sleep a wink all night.”4 The loss (described by Joe Falls in the Free Press as a “suffocating setback”) dropped the White Sox (78-63) two games behind the Tigers (81-62), who were tied with the Twins for first place; the Red Sox (81-63) were a half-game back.

Stanky counted on Horlen to resuscitate the White Sox’ fading pennant hopes. The 29-year-old from Texas was one of the era’s most effective and often overlooked hurlers. Over a five-year period (1964-68), Horlen led the AL in ERA (2.32). Entering the biggest game of his career, the seven-year veteran had a record of 70-57, including 15-6 with a 2.31 ERA thus far in ’67, and had earned his first and only All-Star berth two months earlier. A nervous type, known to chew paper while on the mound, Horlen took a cerebral approach to the game, relying on movement instead of power for his success.5

A disappointing crowd of 23,625 showed up at Comiskey Park, on the South Side of the Windy City for the Sunday doubleheader, prompting Edward Prell of the Chicago Tribune to suggest that the team “had cause to wonder what’s happened to their fans.”6 The hitherto biggest series of the season drew just over 60,000 spectators.

Horlen was coming off a strong performance in his last start, tossing eight scoreless innings against the Angels, but picked up a no-decision when his teammates failed to score for him. The tables turned against the Tigers after Horlen breezed through the first. In what seemed like an annual refrain, the White Sox were a poor-hitting (.225 batting average) and low-scoring (second fewest runs in the AL) team, but they came out swinging against 25-year-old right-hander Joe Sparma, who was enjoying a breakout season (14-8). Tommie Agee led off with a single to extend his hitting streak to 13 games, and then swiped his 26th bag of the campaign. Bill Voss hit a routine, one-out grounder to first baseman Norm Cash, who fielded the ball cleanly, but Sparma fumbled his relay throw, permitting the speedy Agee to scamper home for the game’s first run. Consecutive singles by Ken Boyer and Pete Ward plated the second run (also unearned). Wayne Causey followed with a line-drive triple, which according to the Tribune, rolled to the wall in left center, driving in two more.7 Sparma, who had tossed a two-hit shutout in his last start, was relieved by former Los Angeles Dodgers All-Star Johnny Podres. He dispatched J.C. Martin then intentionally walked Ron Hansen to face Horlen, who ripped a single, scoring Hansen and giving the White Sox a 5-0 lead.

The game was mostly uneventful for the next seven innings. Only two Tigers reached base. The Tigers got a scare when their All-Star catcher Bill Freehan was hit on the right wrist in the third; he left the game in the sixth for precautionary reasons and did not play in the second game of the twin bill. The Tigers exacted retribution when Horlen was plunked in the fourth. Graybeard Eddie Mathews reached on Boyer’s error in the fifth, but was immediately erased when Jim Northrup hit into a 1-6-3 twin killing. The Tigers pounded Horlen’s sinkers into the ground all afternoon, hitting only three balls into the outfield the entire game. “My control and a fastball that was sinking,” responded Horlen when asked about the reasons for his success. “I threw some curves early, but they weren’t getting over so I concentrated on the fastball.”9

A trio of Tigers relievers (Podres, Dave Wickersham, and Pat Dobson) matched Horlen’s zeros, yielding only two hits over 7⅓ innings until the bottom of the eighth. Causey connected for a two-out single off rookie Mike Marshall and moved to second on a passed ball charged to Freehan’s replacement, Bill Heath. Martin followed with a single, driving in Causey for the White Sox’ sixth and final run.

Horlen took the mound in the ninth just three outs away from his first no-hitter. He admitted after the game that he was thinking about the only other time he entered the ninth with a no-no intact. On July 29, 1963, Chuck Hinton of the Washington Senators crashed Horlen’s party at D.C. Stadium with a one-out single. Two batters later, Don Lock walloped a walk-off, two-run homer for a dramatic 2-1 victory.

Up to this point in today’s game, Horlen had given up nothing that resembled a hit. “[M]y legs were a little rubbery going out there in the ninth,” he candidly revealed later. “He didn’t seem excited, but I knew he was,” said his batterymate Martin, who made two trips to the mound in the last frame. “I just told him not to throw anything down the middle.”10

The Tigers’ first batter, Jerry Lumpe, hit what seemed to be a seeing-eye single over second base. Keystone sacker Wayne Causey moved quickly to his right and made, according to sportswriter George Cantor, a sensational grab and an “off balance throw” to first base.11

As if divining such a play, Stanky had replaced Boyer at first to start the inning with 6-foot-6 Cotton Nash, whose “extra reach was vital,” suggested Edward Prell.12 When first-base umpire John Stevens immediately and emphatically called Lumpe out on a bang-bang play, Mayo Smith burst from the dugout and argued the call, as did Lumpe, but to no avail.

“We always shade [Lumpe] up the middle,” said Horlen about the defensive gem. “As soon as Wayne got there, I was just hoping it would get there in time. I knew it had a chance because Lumpe is not a fast runner.”13

Heath followed with a tricky, short-hop bounder to third baseman Don Buford, who fielded it on the run and then rifled a bullet to Nash for out two. Horlen retired Dick McAuliffe on an easy grounder to short to end the game and complete the only no-hitter in his career in 2 hours and 17 minutes. He threw his glove into the air as his teammates rushed from the field and dugout to congratulate him.

Horlen faced 28 batters, fanned four and walked none, but more importantly gave the White Sox a morale boost. It was the 12th no-hitter in the history of the White Sox, a charter member of the AL in 1901, and the first since Bob Keegan’s no-hitter against Washington on August 20, 1957. The Tigers suffered their second no-hitter of the season. However, they won the first, on April 30 in Baltimore, when three walks, a wild pitch, and an error led to two runs in the ninth, saddling Steve Barber (8⅔ innings) with an unusual loss (Fred Gladding recording the final out in that game).

In the second game of the doubleheader, White Sox rookie starter Cisco Carlos tossed six scoreless innings to pick up his first big-league win, 4-0, combining with relievers Hoyt Wilhelm and Bob Locker on a five-hit shutout. The White Sox “don’t propose to abdicate from the sizzling four-club American League race,” wrote Prell euphorically in the Tribune.14

Horlen continued his hot pitching, posting a microscopic 1.17 ERA in his final five starts, including two more shutouts. He finished the season with a career-best 19 wins (seven losses) and led the AL in ERA (2.06), tied five other pitchers for the lead in shutouts with six. He also placed second in the Cy Young Award voting and fourth in MVP voting.

Unlike Horlen, the White Sox faltered down the stretch, winning just nine of their final 19 games to finish in fourth place (89-73). The Red Sox defeated the Twins, 5-3, on the last day of the regular season to complete the “Impossible Dream” and snag the pennant.