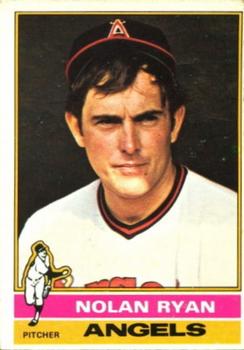 “Any time they cut into your arm, you’re going to worry, but I think I’ve proved I’m all right,” said Nolan Ryan, the California Angels’ flamethrower, after fanning 18 Chicago White Sox.1 The White Sox’ Ralph Garr, a former batting champ with the Atlanta Braves, agreed, gushing that Ryan “threw better than anyone I’ve seen for a long time.”2

Ryan began the 1976 season with major question marks. Three years earlier, he recorded the most punchouts (383) in big-league history as part of a three-year stretch (1972-1974) leading the majors in strikeouts. Seemingly on his way to his fourth straight campaign of at least 300 whiffs in ’75, Ryan came down with elbow pain and eventually underwent season-ending surgery to remove four bone chips from his right elbow. Many wondered if the “Ryan Express” could bounce back in 1976; few expected the 29-year-old to regain his mantle as the hardest thrower in baseball history.

“I knew I was okay in January when I started throwing again,” Ryan said confidently.3 He was right. He yielded a sole hit and struck out seven, but also walked six in seven innings in his season debut and lost. Two starts later, he tossed a three-hit shutout, fanning 12 Baltimore Orioles. Ryan demonstrated that he still possessed his world-class heater and knee-buckling curveball, but there was no disguise for his offensively challenged teammates, the AL’s lowest-scoring team.

The Angels (63-77) were in fifth place in the AL West as they prepared for the first game of a four-game series against the White Sox (59-80), the West Division’s cellar dweller. The teams were going in opposite directions. Since Norm Sherry replaced skipper Dick Williams in late July, the Angels were on a 24-20 roll; the Pale Hose, piloted by 67-year-old Paul Richards, were in a free-fall, having lost 32 of their last 48.

Ryan entered the game with a lackluster 12-17 record and a high 3.84 ERA in 232⅓ innings, while leading the majors in strikeouts (260) and walks (144). He had whiffed at least 10 batters in nine of 33 starts, including 17 in 10 innings in a 5-4 victory against the Detroit Tigers on August 18. Toeing the rubber for the White Sox was Bart Johnson, who missed the entire 1975 season because of a herniated disc and underwent an experimental procedure to revive his once promising career. “It’s a new treatment they’re using for disc and back problems,” he explained. “They give you two or three injections of papaya juice right into the disc area and supposedly that strengthens the disc.”4 Johnson’s 9-13 slate pushed his career mark to 39-42 in parts of seven seasons.

On a pleasant Friday evening, a modest crowd of 6,575 was at Comiskey Park, on the South Side of the Windy City. That was about 5,000 less than the season average (which ranked 10th of 12 AL teams) despite the announcement earlier that day that the White Sox had activated Minnie Minoso, the 50-year-old coach and former White Sox All-Star. It was yet another publicity stunt by the master showman, club owner Bill Veeck, who thought the one time “Cuban Comet,” who had retired in 1964, could serve as a DH. Veeck ultimately decided to push back Minoso’s debut one day so he did not have to face Ryan.

After Johnson worked around a two-out double by Mike Easler in the first inning, Ryan had a close call in the bottom of the frame. He issued a two-out walk to Jim Spencer, then tossed Jorge Orta’s tapper to the mound over first baseman Tony Solaita’s head and into right field. According to the Tribune, the White Sox might have scored had Spencer not pulled up short at third on the error. Ryan fanned Sam Ewing (batting .174) to escape scoreless.

The Angels averaged a measly 3.4 runs per game and batted a paltry .235 in ’76, so their two-run outburst in the second was music to Ryan’s ears. Bruce Bochte belted his second home run of the season, a one-out solo shot to right field for the Halos’ first run. Dave Chalk sliced a two-out single and then scored on Andy Etchebarren’s double to right.

Through four innings, Ryan had fanned nine and walked three (two in the third) and had surrendered only a single to Alan Bannister. “My curve was really working in the early innings,” he said, “but then I got tired and had to go to my fastball.”5 Ryan’s fatigue resulted in a tough fifth when he battled his wildness which was as legendary, as were his walk totals (such as 202 in 1974, six off Bob Feller’s record in 1938). His lack of control was the main reason the New York Mets gave up on him and shipped him along with Frank Estrada, Don Rose, and Leroy Stanton to the Angels for former All-Star shortstop Jim Fregosi after the 1971 season in what proved to be one of the most lopsided trades in big-league history. Ryan put runners on first and second via a walk and single sandwiched around two more punchouts, then surrendered a game-tying two-run double by Orta. Ryan seemed out of gas, but Norm Sherry, a former catcher with the Los Angeles Dodgers who experienced Sandy Koufax’s periods of wildness and utter dominance, stuck with his big Texan. Ryan walked the next two hitters to load the bases, but the bullpen remained silent. Bannister popped up to right field to give Ryan a new lease on life.

The Angels wasted no time regaining the lead. Rusty Torres, who had pinch-run for Solaita in the third after he suffered an injury running out a single, tripled to center field with one out.6 Two batters later, Bochte’s double drove him in for a 3-2 Angels lead. Bochte’s hit was the team’s third to right field, landing in front of Garr, whom skipper Richards had criticized for failing to snag them. “[T]he sod out there in right is loose,” quipped the defensively challenged Garr, in his first season with the ChiSox. “You can’t start on it.”7

Ryan settled into a groove after a rocky fifth. He worked around a leadoff walk to Bucky Dent in the sixth, the only inning in which he did not register a strikeout. He fanned two more in the seventh, then had another lapse of control in the eighth. He walked his eighth and ninth batters, interrupted by Dent reaching base on third baseman Bill Melton’s error. With the bases jammed and just one out, the Express punched out Garr and Bill Stein to escape unscathed. “I don’t think strikeouts,” quipped Ryan, “but in the eighth inning when they had the bases full, I was.”8

Strikeouts are “the ultimate proof that he’s still throwing as hard as ever,” declared the Los Angeles Times about Ryan’s overpowering performance against the White Sox.9 At no time was the Express more unhittable than when he fanned the side to complete the 3-2 victory in 2 hours and 29 minutes.

A fast worker who seemed to have an infinite number of pitches in his right wing, Ryan flung the orb 185 times and recorded 18 strikeouts, one off the major-league record he shared with Tom Seaver and Steve Carlton, and he himself accomplished three times, for a nine-inning game. He shrugged off his nine free passes, declaring, “I wasn’t really that wild although the box score looks it. I was around the plate on most pitches.”10 White Sox pilot Paul Richards admitted that Ryan had a tough curve and powerful heater, but claimed his club would have won “if we don’t [sic] swing at so many bad balls.”11

Notoriously modest and self-effacing, Ryan took a sober approach to his 13th win. “I guess that would be the highlight of my season,” he said. “I haven’t really accomplished much. I’ve struggled with my rhythm all year. But at least I found out my arm was all right.”12 It was more than all right. Ryan concluded the ’76 season on fire. From August 31 to the end of the season, he went 7-1 in 8 starts, yielded just 30 hits in 70 innings with a 1.41 ERA, fanned 86, and walked 48. His final line (17-18, 3.36) with a major-league-most 327 strikeouts, as well as 183 walks while allowing a big-league fewest 6.1 hits per 9 innings proved that the Express was not yet ready to slow down.