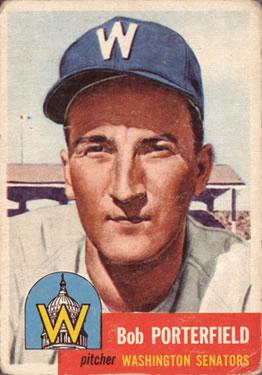 It was all over but the shouting. The pennant race in the American League had just about been decided; the New York Yankees held a commanding 10-game lead over Cleveland as the schedule wound down. For the third year in a row, the Indians would be the runner-up to the Yankees.

If there was any drama between the Indians and the Senators, it was the race for the batting championship between Washington’s Mickey Vernon and Cleveland’s Al Rosen. As the Indians headed to the nation’s capital for a two-game series on September 11, Vernon was ahead of Rosen by a slim margin. Vernon was batting .332 to Rosen’s .327. Both players were at top of the league when it came to swinging the lumber. Rosen was leading the loop in home runs (40) and RBIs (133), and was tied for the lead in runs (97) with Washington’s Eddie Yost and Chicago’s Minnie Miñoso. The Triple Crown was within Rosen’s grasp, but time was getting short.

Vernon, a left-handed hitter, was ranked second in RBIs (103) and runs (95) in addition to his league-leading batting average. Vernon made his debut in 1939 with Washington, was traded to Cleveland after the 1948 season, then was shipped back to the Senators on June 14, 1950, for pitcher Dick Weik.

While the Indians occupied second place in the AL, the Senators were in fifth place, 23½ games behind the front-running Yankees. In Game One of the series, Washington skipper Bucky Harris sent Spec Shea to the hill to oppose Cleveland’s Bob Lemon. Both pitchers went the distance, with Shea getting the win in the 6-4 Nats victory. Rosen and Vernon each went 1-for-3. Going into the second game, and the last time their teams would see each other in the season, Vernon was batting .332 while Rosen posted a .327 average.

The Indians pitcher would be Art Houtteman (9-12, 4.76 ERA). Houtteman had been acquired by Cleveland from Detroit as part of an eight-player deal on June 15. Currently, he was on a four-game winning streak.

Apparently, the possibility of Porterfield winning his 20th game, or the hitting exploits was not enough to draw fans to Griffith Stadium. A minuscule crowd of 5,798 attended the afternoon game.

The Senators chipped away at Houtteman and scored single runs in the second, fourth, fifth, and sixth innings to stake Porterfield to a 4-0 lead. Wayne Terwilliger and Vernon each knocked in a run while Ed Fitz Gerald accounted for two RBIs.

In the top of the eighth, Cleveland first baseman Bill Glynn led off with a single to center field. After Dale Mitchell fouled out, Rosen came through with a double to left field. Glynn scored from first and Rosen advanced to third on the throw home. Larry Doby walked and Wally Westlake singled Rosen home to cut the Senators lead in half, 4-2.

Relief pitcher Bill Wight, who was working his second inning, set the Senators down 1-2-3 in the bottom of the eighth. Out of the dugout came Porterfield to attempt to get his 20th victory. But Cleveland did not make it easy on him.

With one out, Cleveland manager Al Lopez sent Luke Easter in to pinch-hit for Wight. Easter came through with a single to center field. Bob Kennedy ran for Easter. Bobby Avila singled, moving Kennedy to second base. After Glynn made the second out with a fly out to center, Mitchell singled to center to plate Kennedy and Avila went to third base. Up came Rosen, who thus far was 3-for-4. But Porterfield struck out the Indians cleanup hitter, preserving the Nats’ win and his 20th victory. He was the first pitcher in the AL to reach the 20-win plateau in 1953.

“I left him in against what might have been better judgment,” said Harris, “but I had to give him the shot at the white alley. Nobody wanted Bob to win his 20th more than I did, and I was prepared to take the rap if he got licked.”1

As for the batting race, it came down to the final day on the schedule. Vernon edged out Rosen by one percentage point, .337 to .336, to win the second batting championship in his career. Vernon topped the league in 1946 with a .353 average.

Rosen led the AL in home runs (43), RBIs (145), and runs (115). He was voted American League MVP in 1953. Rosen was the first player to win the award unanimously since the electorate was expanded to three writers from each league city in 1938.

The author accessed Baseball-Reference.com for box scores/play-by-play information and other data, as well as retrosheet.org.