In seven seasons of futility, the New York Mets had never won more than 73 games in a season or finished higher than ninth place in the National League. With the 1969 expansion, plus divisional play, the team was guaranteed to finish no lower than sixth place. Led by manager Gil Hodges, in his second year at the helm, the Mets opened the season with a franchise record of 394-737. On August 27, the Mets won their 74th game of the season, a new franchise high. With Jerry Koosman on the mound, they beat the San Diego Padres, 4-1. On September 9, at home against the first-place Chicago Cubs, the Mets were assured of their first winning season. They bet the Cubbies 7-1 for win number 82.

More significantly, the victory, in a Tom Seaver–Fergie Jenkins matchup, pulled the second-place Mets to within a half-game of the East Division leaders. Chicago had been in first place for 155 consecutive days[fn]Edgar Munzel, “Composite Slump Sends Cubs Into Deep Snooze in Stretch,” The Sporting News, September 27, 1969: 8.[/fn] before the Mets finally pushed them out on September 10, thanks to a doubleheader sweep of the Montreal Expos while the Cubs were losing to the Philadelphia Phillies. It was the first time in their history that the Mets had occupied the top spot in the standings.[fn]Joe Falls, “All the Way With Shea and O.J.,” The Sporting News, September 27, 1969: 2.[/fn] On the 11th, the Mets padded their lead to a game and a half, while extending their winning streak to seven games, with a 4-0 shutout of the Expos. The Cubs, meanwhile, dropped their eighth straight game.[fn]The Cubs lost 4-3 to Philadelphia.[/fn] Thus ended a nine-game homestand, as the Mets embarked on a seven-game, three-city road trip, beginning in Pittsburgh.

The four-game series began with a twilight-night doubleheader, the second twin bill for both the Mets and the Pirates in a three-day period and the Mets’ 20th doubleheader of the season. The Mets had swept nine of those previous 19 doubleheaders, splitting eight, and getting swept twice, for a combined record of 26-12 (.684), a much better rate of success than their record in single games (61-45, .575) or their overall record (85-57, .598).[fn]http://baseball-reference.com/teams/NYM/1969-schedule-scores.shtml.[/fn] One of those doubleheader sweeps had occurred on July 4 in Pittsburgh, when the Mets had prevailed by scores of 11-6 and 9-2. In this one, the big hits came from unlikely sources.

The Pirates were leading the National League in batting and the Mets ranked third in pitching as they took the field before 19,303 fans on a Friday evening. Third-year right-hander Bob Moose opened the series on the mound for Pittsburgh, carrying a personal seven-game winning streak, a 10-2 record, and an ERA of 3.30. Moose had not lost a game since May 13, when he was defeated by the San Francisco Giants. New York countered with southpaw Jerry Koosman (13-9, 2.48), who had lost two of his previous three starts against Pittsburgh this season. The Mets offense was a bit shorthanded for the series. Outfielders Cleon Jones (bruised hand) and Art Shamsky (Jewish holidays) and infielder Ken Boswell (weekend Army duty) were unavailable.[fn]Jack Lang, “Laugh It Up When You’re in First Place,” The Sporting News, September 27, 1969: 12.[/fn]

Both pitchers did quite well. Wayne Garrett was the first hitter to reach base, hitting a single with one out in the top of the second inning for the Mets. Moose, though, struck out the next two hitters. Koosman ran into trouble in the bottom of the inning, loading the bases with one out. A force out at the plate and a strikeout of Moose allowed the lefty to keep the game scoreless.

In the top of the fifth, after Ron Swoboda whiffed, Bobby Pfiel and Duffy Dyer singled, bringing Koosman to the plate, with both runners in scoring position. (Dyer had advanced on the throw-in.) After his third-inning strikeout, Koosman was now 3-for-69 (.043) for the season. This time, though, he singled into right field and drove in Pfeil. It was Koosman’s only RBI of the season. Dyer held at third base, deciding not to challenge the arm of Roberto Clemente. After beaning Bud Harrelson, Moose got two groundouts to get out of the inning without further damage.

With a 1-0 lead, Koosman did not allow another baserunner until Jose Pagan drew a walk in the seventh inning. Al Oliver lined the Pirates’ third double play of the game to end that inning. The Pirates pinch-hit for Moose in the eighth inning, without success, and Chuck Hartenstein pitched a scoreless ninth inning in relief. Leading off the Pirates’ ninth with the Mets leading 1-0, Matty Alou reached base on an error, but Koosman was not to be denied, retiring the next three hitters and keeping the ball in the infield, completing his fourth shutout of the season and his second against Pittsburgh. 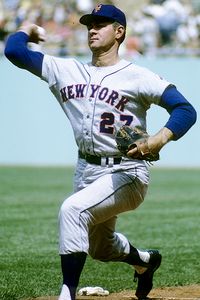 The Pirates, who had now lost four of five games on their current homestand, sent second-year right-hander Dock Ellis (9-15, 3.92) to the mound to face Don Cardwell (6-9, 3.10) in a rematch of the nightcap game of July 4, won 9-2 by Cardwell and the Mets. Ellis got off to a slow start, but survived a first-inning double and a base on balls, thanks to a pair of strikeouts and a groundball. Cardwell didn’t appear to be sharp. Either. He walked the leadoff hitter, Alou, but got a line-drive double play to erase the runner. A single put another Pirate on base, but a groundout ended the inning. In the second inning, Ellis quickly retired the first two hitters, but Harrelson doubled and Cardwell, hitting .171, drove him home with a single into left-center field, the fifth and final RBI of Cardwell’s season.

Pitching with the lead seemed to agree with Cardwell; he retired the next seven Pirates hitters. The Mets turned their fourth double play of the day to get out of the fourth inning. Cardwell pitched a perfect fifth before Freddie Patek led off the Pittsburgh sixth inning with a single. A wild pitch added to the tension, but Cardwell worked out of the inning. A perfect seventh inning was followed by a leadoff single from Manny Sanguillen in the Pirates’ eighth inning. Richie Hebner sacrificed the tying run into scoring position. Jose Pagan pinch-hit. Cardwell then threw his second wild pitch of the game, sending Sanguillen to third base, the farthest any Pirate had advanced in either game. Cardwell bore down, striking out Pagan and then fanning pinch-hitter Clemente to keep the narrow 1-0 lead intact.

For the second time in the twin bill, Chuck Hartenstein shut out the Mets in the top of the ninth inning. Hodges sat down Cardwell and asked southpaw Tug McGraw to finish the game. Matty Alou greeted McGraw with a bunt single, but then got stranded. Patek struck out, Willie Stargell flew out, and Al Oliver bounced back to McGraw, who made the tag to end the game. It was the third consecutive shutout by Mets pitchers and their 22nd of the season.[fn]The Mets finished the year with 28 shutouts.[/fn]

“Holy Cow,” exclaimed Hodges afterward. “I never saw anything like that before.”[fn]Lang, op cit.[/fn] Neither had anyone else.

In addition to the sources listed in the Notes, the author consulted Baseball-Reference.com and Retrosheet.org.