This article was written by Jon Barnes 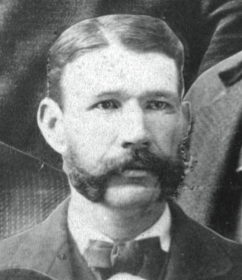 Cleveland fans had good reason for optimism heading into the start of the 1883 baseball season. In its first four years of National League competition, the Cleveland club had finished sixth, third, seventh, and fifth in the standings, with the 1882 squad sporting a distinctly mediocre record of 42–40. But management was determined to build a contending team for the following year, and one of the priorities had been to sign another top pitcher to take some of the load off the team’s ace, Jim McCormick, especially since the schedule was being expanded to 98 games.

The Cleveland Herald described Daily as “a strong man in many respects … a remarkable batter for a one-handed man, hitting hard and often … a careful base watcher” with a quick, puzzling delivery, and good pace and command. His weak points, the newspaper contended, “are wildness of delivery at times and a bad disposition.”1 Indeed, part of the Daily legend is that he once punched out his catcher for throwing the ball back to him too hard and making his stump sore.

Accounts differ on the circumstances of the boyhood accident that caused Daily to lose his left hand, and his age at the time of the injury. He may have been shot accidentally by a friend playing with a loaded musket, or he may have been burned while simulating fire on a theater set in Baltimore.

Before signing with Buffalo, Daily spent many years playing in the sandlot and semipro leagues of Baltimore. He wore a leather glove on his left arm with a square pad to protect his stump, and was able to trap groundballs against it with his right hand. He usually attempted to catch popups and line drives with his pitching hand. He used a shortened bat at the plate that he could swing more easily with only one arm.

Led by the McCormick-Daily pitching duo, Cleveland moved into sole possession of the league lead for the first time in the franchise’s history on June 11, 1883.2 Although the offense was erratic (Providence’s Hoss Radbourn no-hit the team on July 25), Cleveland was still in the thick of a tight four-team race before the September 13 game at Philadelphia.

Daily was now pitching almost every game because McCormick had been injured, and he was showing signs of wear. He had lost three of his last four starts, including a 21–7 rout by Chicago. Maybe the weak bats of the last-place Philadelphia club, the sloppy conditions of the field,3 or the week’s rest because of rainouts allowed Daily to find new life in his curveball. Whatever the reason, the one-handed man was unhittable that day and walked only three in a 1–0 victory.

There were no telegraph wires running to the Philadelphia ballpark, and carrier pigeons were used to dispatch reports of the game. Perhaps that is why the Cleveland papers ran only sketchy recaps of the contest, though they duly noted the significance of Daily’s feat.

“Daily’s work of yesterday was wonderful and only equaled four times since the League has been organized,” wrote the Cleveland Herald.4 It was actually the eighth no-hitter in National League history.

“Daily did great work in the box yesterday,” said the Cleveland Leader.5

The Cleveland Plain Dealer was the most descriptive: “The Clevelands ‘scratched’ a game at Philadelphia yesterday—and a stunning ‘fluke’ it was too. The tail-enders of the League failed to make a base hit and consequently made no run. Cleveland worried in a lonesome run but it proved of sufficient size to make a game out of. Either Daly (sic) pitched a wonderful game or the Philadelphias have been taking batting lessons of the Clevelands.”6

With an earlier game still under dispute (the league eventually ruled that Cleveland had forfeited its August 1 game to Boston when Daily was replaced in the box; substitutions at the time could be made only for injury), the September 14 papers showed Cleveland at the top of the standings after Daily’s no-hitter. The club had a 52–34 record, creating a virtual three-way tie with Providence and Boston, both 53–35. Chicago was a game and a half back at 52–37.

A doubleheader sweep the next day over Philadelphia, including another gem by Daily—a 5–1 victory in the second game—put Cleveland on top by itself at 54–34. But the team, which was in the middle of a 25-game road trip to end the season, faded and managed only two wins the rest of the way. Adjusted for the forfeited game, the Clevelands finished with an official record of 55-42, in fourth place, 7½ games out. Its 2.22 team ERA led the league. McCormick won the individual title with a 1.84 ERA. Daily was fifth at 2.42. He also led the league in walks with 99, and was seventh in strikeouts with 171.

Daily jumped to the Union Association—a league that coincidentally had been organized by delegates in Pittsburgh just a day before his nohitter— in 1884.7 That season he struck out an incredible 483 batters—more than half his career total—walked only 72 in 500 innings, and batted .214 in 201 at-bats.

It was the last hurrah for Daily. Initially blacklisted by the other major-league teams after the Union Association folded, he eventually signed with the St. Louis National League team in 1885, and posted a 3–8 record and a 3.94 ERA. He last pitched in the major leagues in 1887, when he returned to Cleveland, now a last-place team in the American Association. His record that year was 4–12, with a 3.67 earned-run average, 30 strikeouts, and 44 walks. By that time his 1883 pennant-race and no-hit heroics were just a distant memory. 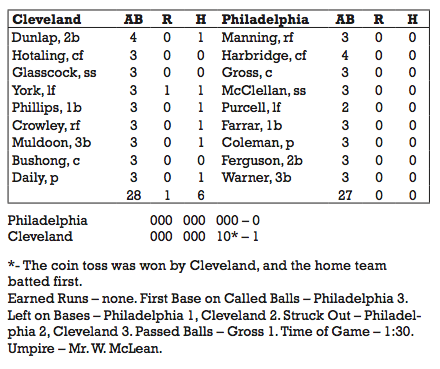