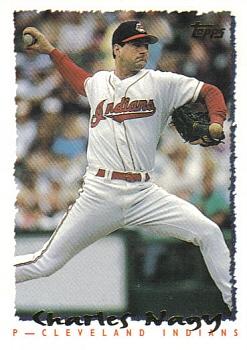 It was a foregone conclusion that the Cleveland Indians were headed to the postseason for the first time since 1954 when they faced the New York Yankees on Wednesday evening, September 13, 1995, at Jacobs Field. The Indians owned the best record in baseball (88-39) and enjoyed a 24-game lead over the Kansas City Royals in the American League Central Division. Manager Mike Hargrove’s squad had played especially well at the “Jake” as the two-year-old park was affectionately called, winning 48 of 64 games; however, they were coming off losses in the first two games of the three-game set with the Yankees, the first and only time all season that the Indians lost consecutive games at home. The New York Yankees were playing their best ball of the season. After a miserable stretch in August (4-14), skipper Buck Showalter’s team had won 12 of their last 14 games to improve their record to 66-61, good for second place in the AL East. More importantly, they began the evening with a half-game lead over the Seattle Mariners for the AL wild-card spot. A victory would also mark the Yankees’ first three-game sweep of the Indians in Cleveland since 1982.

Taking the mound for the Indians was 28-year-old right-hander Charles Nagy, practitioner of sinkers, slow curves, and split-fingered fastballs. A six-year veteran who came up through the Indians organization, Nagy had won nine of his last 10 decisions to improve his record to 13-5 and move over the .500 mark for his career (54-48). His opponent was the reigning AL Cy Young Award winner, 32-year-old David Cone, whom the Yankees had acquired about six weeks earlier in a trade with the Toronto Blue Jays. The 10-year veteran, with 126 wins to his credit, had won five of six decisions for the Yankees, but had been roughed up in his last three starts, surrendering seven home runs and 16 earned runs in just 22⅓ innings. “Cone had one of the best repertoires I’ve ever seen a pitcher possess,” said former Indians knuckleballer Tom Candiotti.1 Cone’s legitimate six-pitch arsenal included a fastball, splitter, slider, overhand curve, side-arm curve, and changeup.

The game, delayed 77 minutes by rain, finally got underway at 8:52 P.M. on a warm, 68-degree and humid night on Lake Erie. Despite the weather, a sellout crowd of 41,707 packed Jacobs Field for the 46th consecutive game since the streak started on June 12. (The streak ended on April 4, 2001, after a then big-league record 455 games.)

The last time Nagy faced the Yankees, in the second game of a doubleheader on August 10 in the Bronx, he was roughed up for 11 hits and seven runs in just 5⅔ innings, but avoided the loss when the Indians scored five runs in the ninth to win, 10-9. Nagy crafted a different narrative in this game, one of the best in his career. He erased Yankees leadoff hitter Wade Boggs, who was hitting .398 (37-for-93) in his last 24 games, on a weak grounder to second baseman Carlos Baerga. In his only rough stretch the entire game, Nagy walked two of the next three batters before ending the inning by striking out outfielder Daryl Strawberry. Nagy tossed 23 pitches, and allowed two baserunners in one inning for the only time in the game.

The Indians struck quickly in the first inning. All-Star center fielder Kenny Lofton, who had taken Rickey Henderson’s mantle as arguably the game’s most dangerous and disruptive leadoff hitter, drew a walk, stole second and third, and then scored on shortstop Omar Vizquel’s double to right field. Cone retired third baseman Jim Thome (whose grounder moved Vizquel to third) and left fielder Albert Belle before walking DH Eddie Murray on four pitches. With runners on the corners, right fielder Manny Ramirez singled to drive in Vizquel for a 2-0 lead. By the time Cone induced first sacker Paul Sorrento ground out to his counterpart, Don Mattingly, for the third out, he had thrown 34 pitches.

Nagy cruised in the second and third innings, needing only 16 pitches to register six outs. Right fielder Paul O’Neil led off the fourth inning with the Yankees’ first hit of the game, a seeing-eye single between Baerga and Vizquel. Undeterred, Nagy set down the next three hitters to end the inning. In the fifth frame, he surrendered another leadoff single, to left fielder Dion James. The next batter, shortstop Tony Fernandez, hit a grounder back to the mound which Nagy fielded to start the Indians’ only double play (1-6-3) in the game.

Cone labored to hold the Indians scoreless in the second through fourth innings. In the second,  he yielded a one-out double to catcher Tony Peña, who moved to third on Lofton’s single. En route to leading the AL in stolen bases for the fourth of five consecutive seasons, Lofton swiped second. Cone got out of the jam by striking out Vizquel and Thome swinging on full counts. The Indians threatened again in the fourth when Peña connected for a two-out single and then stole second (it was his 80th and final swipe in his 18-year big-league career). Lofton walked to reach base for the third consecutive time before Vizquel grounded out.

Albert Belle, who led the AL in homers (50) and RBIs (126) in 1995, ended a six-game homerless streak by launching, in the words of Jack Curry of the New York Times, “a prodigious” home run to deep right-center field.2 It was his 37th blast of the season and marked the beginning of one of the biggest power surges in Cleveland’s history: In his last 16 games, Belle walloped 14 round-trippers and drove in 21 runs. Seemingly in trouble every inning, Cone surrendered three consecutive hits in the sixth, but only one run (on Vizquel’s single, driving in Peña) to make it 5-0.

In total command of his pitches, Nagy retired 12 of 13 batters from the sixth inning through the ninth. His only blemish was Don Mattingly’s double in the seventh. The game ended after 2 hours and 29 minutes when Nagy struck out catcher Mike Stanley swinging.

Nagy threw 115 pitches and fanned five to register his first shutout since his only career one-hitter, a 6-0 victory over the Baltimore Orioles at Camden Yards on August 8, 1992, and recorded his fifth of sixth career shutouts. Both the Indians and Yankees finished the strike-shortened season strongly and ended long playoff droughts. While Cleveland won 12 of its last 17 games to finish 100-44 and capture the AL Central crown, New York went 13-4 to secure the wild-card spot and secure their first postseason berth since 1981.

In addition to the sources listed in the Notes, the author also relied on Baseball-Reference.com, Retrosheet.org, SABR.org, and The Sporting News.