On September 14, 1878, more than 3,000 screaming supporters shoved into the old Buffalo ballpark at Niagara and Rhode Island Streets to watch their beloved Bisons battle the league-leading Stars of Syracuse. At stake was the International Association pennant. In the 6-by-6-foot pitching box were the league’s two best, future Hall of Fame member  James “Pud” Galvin for Buffalo and Patrick Henry “Harry” McCormick, curveball specialist, for the Stars. The umpire in charge was known to be a Buffalo homer, C.W. Nichols. 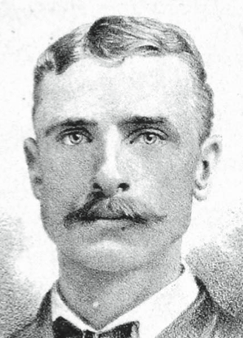 The game climaxed a season-long four-team pennant battle involving the defending champion London (Ontario) Tecumsehs and the Uticas. The “shining orbs,” as one nameless newspaper writer called the Stars, won 22 of their first 25 games. One of the losses had been a forfeit to Auburn when the Stars left the field complaining of poor umpiring. Another loss, to the Tecumsehs, occurred when backup hurler Jimmy Macullar took the box instead of McCormick.

After a slow start, Buffalo reeled off 14 straight wins during a homestand. Bison detractors, namely the Stars, asserted that Buffalo victories were aided by weird calls from their favorite umpire, Nichols. Earlier in the season, the Bisons had actually uncovered a crooked umpire, George Campbell, who lived in Syracuse, but did his dastardly work in a Rochester-Buffalo contest. After the Buffalo Express wrote about Campbell’s work, he sued the paper for slander but never appeared for trial. Rochester had won the disputed contest, 16–3, in Buffalo, causing hometown fans to lose a small fortune in bets on the game. Disgruntled losers mobbed Campbell, but quick and decisive action by two large policemen saved the arbiter, and the pennant race continued.

Buffalo stalwarts were Galvin and shortstop Davy Force, who was at the midpoint of a long career. Five players on the squad received Clipper prizes, emblematic of the best player at his position. They were shortstop Force, first baseman Steve Libby, pitcher-manager Bill McGunnigle, outfielder Joe Hornung, and pitcher Galvin. While all of the 1878 Bisons would play in the major leagues, the season belonged to Galvin. The soon-to-be-portly hurler tossed 900 innings in 101 games that season, winning 72 games and losing 25. Pud pitched 96 complete ones with 17 shutouts. He had a 10–5 record against National League teams. Buffalo was so strong that the team joined the National League in 1879 and remained for seven years.

The Stars’ collision with Buffalo climaxed a meteoric, four-year rise that had placed an unknown, backwater nine into the ranks of the establishment. The club was aided by a mythological record of winning every game and doing it with a reckless abandon that few towns had ever seen. All bachelors, the club featured left-handed third baseman Hick Carpenter, for whom the term “hot corner” would be coined; McCormick, who learned the art of the curveball from inventors Cummings and Fred Goldsmith; second baseman  Jack Farrell, who would star for Providence’s National League team; and first baseman Alex McKinnon.

A strange, paralyzing malady suffered by McKinnon and his 1879 contract-jumping fueled the practice of blackballing and the establishment of the reserve clause. Star outfielders Pete Hotaling and Mike Mansell patrolled the outer gardens with the reserve pitcher. Mansell was one of three Auburn brothers who would play major-league ball. Catcher Mike Dorgan became a manager in the National League and with McCormick married sisters in Syracuse’s social affair of the 1879 year. 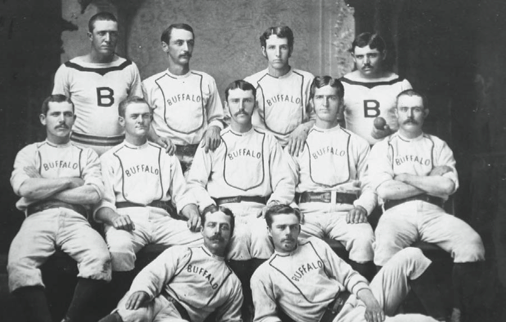 The 1878 Stars formed the best nine ever to wear Syracuse flannels. The next year the franchise would join Buffalo in entering the National League intact, where McCormick would become the only pitcher to hit a home run in the first inning of a 1–0 shutout and the team would win a court judgment against a building owner who placed bleachers on top of his edifice that overlooked the left-field fence of the Stars’ Newell Park.

The importance of the International Association championship game lay in its play on the field; it was not the last game of the season, nor was it the game that clinched the pennant for Buffalo. Even so, every fan of the pennant race that year knew that the winner of the game would win the league. Aided by the umpire, Buffalo wasted no time in scoring runs, scoring frequently in the first two innings and taking the decision, 9–1.

In a larger sense, the game symbolized the “last hoorah” of the old regime, under which players were in control of the league, local umpires made calls that benefited local teams, and teams interpreted league rules for themselves. The Stars went to the International Association winter meetings determined to alter the result of the pennant race by claiming two more late-season victories over the disbanded Rochester nine. The directors of the Association threw out the Stars’ claim, awarded the championship banner to Buffalo, and then watched the National League snatch its two best teams.

The previous year had been the worst in National League history, but the ascension of Buffalo and the Stars demonstrated that it was on its way to recovery. Buffalo’s directors wanted out because they lost $279 in 1878. They wanted the assurance of success that they thought the other league offered.

The National League also learned how to deal with rivals, lessons that were applied four years later when the American Association was created. 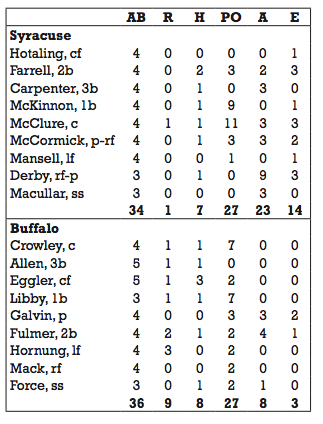