This article was written by Steve Kuehl 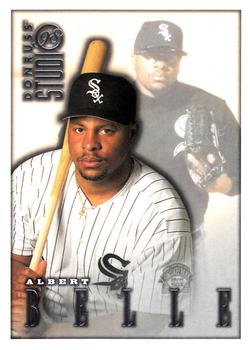 In September baseball fans are typically focused on playoff races. The 1998 season gave fans some extra excitement, a home-run contest. It pitted Mark McGwire of the St. Louis Cardinals against Sammy Sosa of the Chicago Cubs. Each slugger entered their contests on Monday, September 14, 1998, with 62 homers, making them the current record-holders by having passed Roger Maris’s record of 61. In a rare occurrence, they finished their games that day with the same number.

Luckily for baseball fans, excitement came the way of a very unlikely source, the Detroit Tigers and the Chicago White Sox. The Tigers entered the game with a record of 57-92, and the White Sox had a record of 70-78. With the White Sox in second place in the American League Central Division, 11½ games behind the Cleveland Indians, and the Tigers in last place, 25 games back, this game held no meaning in the hunt for October.

Before the game, White Sox manager Jerry Manuel sat in the visitors’ dugout and took a minute to reflect. “Baseball is funny,” he said. “Tonight we have the two youngest teams in the American League facing each other. You really don’t know what you’re going to get.”1

What came next was what McGwire and Sosa had produced for weeks: a spectacular back-and-forth slugfest. A 5-hour, 12-minute contest that went 12 innings and produced 33 runs, 41 hits (with six home runs), four stolen bases, and five errors.

Larry Parrish, the Tigers’ interim manager after the team fired Buddy Bell on September 1, sent Justin Thompson to the mound. Thompson (10-14) came into the game with a personal five-game losing streak.Thompson had a history of arm problems, and had had elbow surgery the year before. White Sox manager Manuel sent out 23-year-old rookie John Snyder (6-2).

The game started with the White Sox’s Ray Durham reaching on an error by left fielder Bobby Higginson. Nonetheless, Thompson made it through the inning unscored upon, even with Durham stealing third base after a groundout by Craig Wilson moved him to second. Snyder started the game with an uneventful 1-2-3 inning.

The fireworks started in the second inning when the White Sox tallied five runs, including a two-run home run by shortstop Wilson, who was playing in only his sixth game. The Tigers clawed back in their half of the inning on a Joe Randa double that scored one run.

Randa had come into the game only hours after learning he had been named the American League player of the week for hitting .476 with two homers and two doubles on the Tigers’ trip to Chicago and Boston. “I’ve felt all along that if I had stayed in the lineup, these are the kinds of things that would have happened.” Randa said.2

Thompson settled down with a 1-2-3 third, and the Tigers clawed back even more against Snyder in the home half of the inning. Juan Encarnacion hit a three-run shot to left-center, cutting the score to 5-4 in favor of the White Sox.

Thompson saw his outing come to an end in the fifth inning after he gave up three straight hits, good for another run and a 6-4 lead. He was replaced by A.J. Sager.

The Tigers scored again in the bottom of the fifth to again draw within one. They took their first lead of the game one inning later, on a two-run home run by Randa. A single by Brian Hunter tacked on one more tally before the inning was over, and it was 8-6 Tigers.

The teams combined for eight runs in the seventh. Before the White Sox were done, they’d scored six times off three Tigers pitchers, Matt Anderson, Marino Santana, and Dean Crow. The Tigers chipped away at the White Sox’s 12-8 lead in the bottom of the inning by scoring two runs.

That was the way it stayed until the bottom of the ninth, when the Tigers tied the game at 12-12 on a double by Tony Clark and a single by Bobby Higginson. Parrish hoped that Higginson’s single would pass a slump-escaping feeling through his bones, allowing him to come on strong for the rest of the season. The Tigers managed to load the bases with one out, but Frank Catalonatto and Brian Hunter were unable to come through with the winner.

The White Sox rallied for three runs in the top of the 10th to take what would normally look like a comfortable lead. But the Tigers answered back in their half, on an RBI single by DamionEasley and a two-run clout by Higginson, his 23rd of the season.

Finally, at a few minutes past midnight, the White Sox’s Durham and Wilson began the 12th with homers off Doug Bochtler. “I hit it as hard as I could,” Durham said. “I was almost too tired to run the bases.”3 After blowing leads of 6-4, 12-10, and 15-12, the White Sox bullpen mercifully came through at the end. Scott Eyre, who had come on to pitch a scoreless 11th,gave up a run before fanning Higginson to end the game. “Everyone was ready for it to end,” Eyre said.4 Chicago emerged with perhaps the first 17-16 win at Tiger Stadium since Bobby Layne quarterbacked the Detroit Lions.5

“Great comebacks by both sides,” Parrish said after the 41-hit extravaganza. “Both offenses never quit.”6 The Tigers and White Sox had combined for 77 runs in their four games thus far in September – and only once in those four games had the score stayed unchanged for at least two full innings.

With all of the focus on McGwire and Sosa in 1998, players like Belle and Ken Griffey Jr. of the Seattle Mariners flew under the radar. Griffey led the AL in home runs (56), with Belle second at 49. Belle’s five RBIs shot him over the 1,000-career-RBI plateau and brought him to within one RBI of the White Sox’ season record of 138 set by Zeke Bonura in 1936. Belle went on to crush the old record, finishing the season with 152 RBIs. Already in 1998 Belle had established the club season records for home runs with 45 (he would finish the year with 49) and total bases with 365 (falling one short of 400 by season’s end). He had a career-high WAR (wins above replacement) of 7.1 in 1998.

The 17 White Sox runs were the most allowed by the Tigers in an extra-inning ballgame. Detroit also established a club record for runs scored in an extra-inning game. Not since the Philadelphia Phillies beat the Chicago Cubs 23-22 at Wrigley Field on May 17, 1979, had a losing team scored so many runs in a contest.

Thanks to all the hitting, the extra innings and the September roster expansions, the Tigers set a team record by using 10 pitchers, and the two teams tied a major-league record for most pitchers in an extra-inning game,18.

The White Sox immediately went on a 9-4 run to finish the season at 80-82, while the Tigers won 8 of their next 12, good for a final record of 65-97 in the AL Central. Parrish said, “We’re relaxed and finally having some fun.” Tigers pitcher Doug Brocail agreed, saying, “I don’t know how many people know this, but there’s a lot of new life in this clubhouse now. How it happened, I don’t care. But we’ve got it.”7