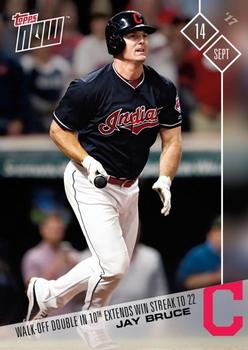 The Cleveland Indians were hot. They were on a 21-game win streak, the most in the American League. The 2002 Oakland A’s had the previous best mark at 20. The last time the Tribe lost was on August 23, a 6-1 defeat to the Boston Red Sox at Progressive Field.

On that date, the Indians held a 4½-game lead over second-place Minnesota. Kansas City was right behind the Twins, in third place, five games off the pace. As the Royals came into Cleveland to begin a four-game series on September 14, Cleveland had increased its lead over the Twins, still in second place, to 13½ games and the Royals to 17½ games.

The Indians had swept six series during the streak: New York, Detroit, and Chicago on the road and Kansas City, Baltimore, and Detroit at home. They won by lopsided scores, and they won the close ones. During the streak Cleveland outscored its opponents 139-35. As the Indians won each game, they passed another team on the ladder to the top of the longest consecutive win streak. They were now tied with the 1880 Chicago White Stockings and the 1935 Chicago Cubs, both of the National League.

With the AL record in their back pocket, only the New York Giants of 1916 stood in the way of a major-league record for the Indians. The Giants won 26 in a row from September 7 to September 30, 1916.

The pitching matchup for the first game of the series between the Royals and Indians featured a pair of right-handers. The Royals were sending Jake Junis to the hill. The rookie hurler from Rock Hills, Illinois, was 7-2 with a 4.34 ERA. He was riding a five-game win streak, dating back to July 24.

The Tribe countered with Josh Tomlin, who was 9-9 with a 5.13 ERA. The often-injured Tomlin had been sidelined for the month of August with a hamstring injury. This game was his third start since returning to the pitching staff.

The Royals struck first on the scoreboard in the top of the second inning. Eric Hosmer led off with a walk and went to third on a single to right field by Salvador Perez. Mike Moustakas grounded into a 4-6-3 double play to score Hosmer.

Cleveland evened it in the home half of the third. Abraham Almonte led off with a double to right field. After Yan Gomes was called out on strikes and Francisco Lindor flied out, Lonnie Chisenhall plated Almonte with a single to right. Chisenhall was cut down at second base for the third out, but after Almonte crossed the plate.

The score remained 1-1 until the top of the sixth inning. The Royals’ Whit Merrifield led off with a double to right field but was erased at third base when catcher Gomes pounced on Lorenzo Cain’s bunt and fired a strike to third baseman Yandy Diaz to nail Merrifield. Melky Cabrera grounded into a force play, with Cain out at second base. It looked as if Tomlin might get out of it, but Hosmer sliced a double down the left-field line. Almonte was shaded toward center and tried to make a sliding catch, to no avail. Cabrera came around from first base to score the go-ahead run. Tomlin was replaced by reliever Joe Smith, who struck out Perez to avoid any more damage.

After giving up a two-out single to Edwin Encarnacion in the bottom of the inning, Junis was given the hook. Mike Minor made his way in from the bullpen. Minor walked Jay Bruce but got Carlos Santana to ground out to third to end the inning.

It looked as if the Indians might keep their strike alive in the bottom of the eighth inning. Or at least tie the score. Ryan Buchter emerged from the Royals’ bullpen in relief of Minor. Lindor led off and lined out to center field. Greg Allen walked and Jose Ramirez followed with a double to left. Buchter intentionally walked Encarnacion to load the bases. But Bruce and Santana both fouled out to end the threat.

The 30,874 Tribe fans at Progressive Field were getting anxious. The ninth inning beckoned and the Indians were down. Could the streak be coming to an end?

The Royals went in order in the top of the ninth inning. The Indians came to bat with only three outs separating them from extending their streak to 22 games or it coming to an end. Kelvin Herrera replaced Buchter on the mound for Kansas City.

Diaz led off and grounded out. Tyler Naquin pinch-hit for Brandon Guyer and singled to left.   Francisco Mejia batted for Gomes, and grounded to second, forcing Naquin. Erik Gonzalez came in to run for Mejia. Cleveland manager Terry Francona was pulling out all the stops, utilizing his bench to manufacture a run. However, it was a starter who came through. Lindor came to the plate, and he was down to his last strike when he blasted a double off the left-field wall. Gonzalez sped home, carrying the mail and scoring the tying run. “For a second, when I hit it, I was like, ‘Oh no, I went the other way. I hit it to the wrong guy,’” said Lindor. “Then, I saw it hit the wall and the emotions were pretty high. Just seeing the whole entire crowd was fun, and then seeing your teammates screaming on the top step of the dugout is pretty special.”1

The ballgame went into extra innings tied at 2 apiece. Cody Allen pitched a scoreless top of the 10th, and the Indians came up in the home half. The Royals went to their bullpen as Brandon Maurer entered the game. Ramirez led off with a double to center field, his 50th of the year. Maurer walked Encarnacion. Bruce stepped to the plate and laced a double to right field that bounded into the corner. Ramirez raced home with the winning run. The winning streak was intact.

“God, I was a madman,” said Bruce about his failure to come through in the ninth inning. “Once we were down to our last strike there, and Frankie hit that double and we tied it, I kind of knew that I was going to have an opportunity to hit again.

“That’s what you hope for, man. I want the at-bat. I want the chance, I want the opportunity, and I think I can speak for everyone else in that room, they feel the exact same way as me. And I think that’s why we’ve been so successful.”2

Kansas City ended the Indians’ streak the next evening, winning 4-3. The 22-game streak is the second longest in major league history. There was a debate, on more than one media outlet, about whether the 1916 Giants’ streak of 26 games was a legitimate one.

One point made is that one of the Giants’ games was suspended, but then made up at a later date. Games were played during the day, not under the lights, and it was a common occurrence for games to be suspended. The statistics would count but the game would be replayed. This was the situation in the Pirates-Giants game on September 18, 1916, at the Polo Grounds. And the official ruling of Major League Baseball and the Elias Sports Bureau, the major leagues’ statistician, is that the Giants hold the longest winning streak in the majors. Cleveland holds a rightful claim to the longest streak in the AL

“A tie was never an acceptable result of a baseball game,” said Steve Hirdt, executive vice president of Elias Sports Bureau. “If one happened because of darkness or rain or some certain circumstance, the game was played over.

“Sports fans are used to the nuance in hockey and football of the difference between a winning streak and an unbeaten streak or consecutive games streak without a loss. Baseball has never had those two different records. They would replay the game until a legitimate won or loss result was achieved.”3

The author accessed Baseball-Reference.com for box scores/play-by-play information baseball-reference.com/boxes/CLE/CLE201709140.shtml and other data, as well as http://www.retrosheet.org/boxesetc/2017/B09140CLE2017.htm