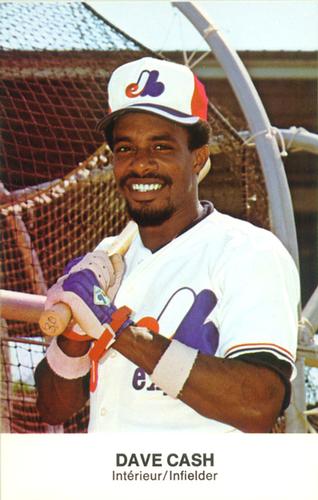 Montreal Expos fans were bursting with excitement in the summer of 1979. Although they had enthusiastically supported more than their share of cult heroesin the franchise’s early years, they certainly didn’t have much on-field success to cheer about. In the team’s first decade (1969-1978), Montreal averaged a woeful 91 losses per year, failing to finish any higher than fourth place in the National League East. However, the 1979 Expos, stocked with dynamic young talent1 and featuring the league’s best pitching staff, rewarded their fans with the first real pennant race in franchise history.2

And what a pennant race it was. Montreal reeled off 15 wins in its first 20 games and the Expos looked as though they might run away with the division, with the team holding a healthy 6½-game lead as late as July 6. Unfortunately for the Expos, a disastrous 6-12 stretch from July 10 to July 28 allowed the surging Pittsburgh Pirates to get back into the race. The Pirates, led by veteran slugger Willie Stargell, eventually knocked Montreal out of first place the first game of a doubleheader on August 5. Pittsburgh would go on to post a stellar 21-9 record for the month.

With the Expos stuck in neutral in late August, manager Dick Williams decided to shake things up by inserting 31-year-old Dave Cash back into the starting lineup. Cash, the first free agent signed in franchise history, had inked a lucrative five-year, $1.5 million contract after the 1976 season.3 After playing decently in 1977, he struggled through the worst season of his career at the plate in 1978. The three-time All-Star eventually lost his second-base job to speedster Rodney Scott during spring training of 1979.4 Prior to his return on August 27, Cash had started only once all season and was limited to a paltry 44 at-bats in a supporting role. Williams’s reinstatement of Cash paid immediate dividends, as Montreal won 17 of 20 games to pull to within a half-game of the first-place Pirates at the end of play on September 15.

Expos fans, energized by the dramatic pennant race with Pittsburgh, responded by coming out to Olympic Stadium in droves. The 1979 season would see Montreal draw more than 50,000 fans seven times and the upstart Expos finished fourth in the National League in attendance. The doubleheader against the Cardinals on September 16 drew 59,282 boisterous fans, the largest crowd ever to witness a baseball game in Canada and a record that still stood as of 2017.5 The previous single-game attendance mark was 59,260, set less than two months earlier for a July 27 doubleheader in which the franchise’s original superstar, Rusty Staub, played in his first home game as an Expo since 1971.6

The September 16 doubleheader was Montreal’s second in as many days and already their fourth of the month.7 St. Louis won the first game, 4-3, but a Pittsburgh loss to the lowly New York Mets kept the Expos within a half-game of first place heading into the nightcap. Scott Sanderson, a 23-year-old right-hander in his first full season in the big leagues, took to the hill in the second game. After beginning the season in the starting rotation, Sanderson had been dispatched to the bullpen in late July after a few shaky outings. He was pressed back into service as a starter in September, thanks to a string of rainouts that forced a grueling number of twin bills down the stretch.

After Sanderson kept the Cardinals off the scoresheet in the top of the first inning, the Expos wasted little time grabbing the lead. Left fielder Warren Cromartie doubled to start the bottom of the first, and the next batter, Cash, extended his hitting streak to 11 games by bringing Cromartie around with an RBI double.8 St. Louis came right back in the top of the second inning with a sacrifice fly by Ken Oberkfell that sent center fielder Jerry Mumphrey home with the tying run. Both Sanderson and Cardinals starter John Denny kept the scoring opportunities to a minimum after that.

The Cardinals squandered a chance to take the lead in the top of the fifth inning when they couldn’t capitalize on a one-out triple by Keith Hernandez, and then the Expos suffered a similar fate in the sixth by stranding Cromartie after he reached third on Denny’s wild pitch with only one out. The Expos threatened again in the bottom of the ninth, this time off reliever Roy Thomas. Andre Dawson electrified the crowd by bunting for a base hit and stealing second with one out, but neither Staub nor Larry Parrish could drive him in with the winning run, sending the game into extra innings with the score still tied 1-1.

With a pitching staff depleted by all of the September doubleheaders, Williams chose to send Sanderson back onto the hill for the top of the 10th inning, just as he had done in the previous day’s twin bill with another young starter, Dan Schatzeder. The decision would work out once again, as Sanderson easily retired the Cardinals in order.

With two outs and nobody on in the bottom of the 10th, Gary Carter, who had entered the game in the previous inning, pulled a double just inside the left-field foul line to put the potential game-winning run in scoring position.9After an intentional walk to Jerry White, Warren Cromartie hit a soft grounder that rookie second baseman Ken Oberkfell booted, loading the bases for Cash, the Expos’ hottest hitter.10 Few in attendance could have predicted what would happen next. Cash, who hadn’t homered all year and was credited with only 21 round-trippers in 11 big-league seasons, turned on a 1-and-1 pitch from reliever George Frazier and launched a grand slam over the left-field wall that sealed a 5-1 victory and sent the record crowd into a frenzy.11

The blast was a huge relief for Cash. After the game he admitted that when his homer cleared the fence, “everything exploded inside me, all the doubts, frustrations and everything.”12 Cash had felt humiliated when he lost his starting job to Rodney Scott in spring training, but the hard feelings had long since evaporated.13 “With so much at stake, all bitterness which might have existed early in the season must be put aside,” he said, “I’m just happy to be given the opportunity to help this club win. I can only give my best at every opportunity.”14

Shortly after all four runs crossed home plate, the pair of gigantic black-and-white digital scoreboards at the “Big O” flashed the updated National League East standings. Although Montreal (87-57) and Pittsburgh (88-58) were tied for the best record in the division, the Expos had pulled into a slim lead in winning percentage: .604 to .603. The display of those numbers on the scoreboard ratcheted up the deafening cheers in Olympic Stadium even further. With the charging Expos now sitting in first place in the middle of September, the team’s first division title seemed within their reach.

Unfortunately for the Expos, the Pittsburgh Pirates would have none of it. The Pirates hammered a beleaguered Montreal pitching staff in a pair of pivotal games at Three Rivers Stadium in the final week of the season, and the lopsided Pittsburgh victories would be the turning point in their back-and-forth pennant race. The Expos eventually finished two games behind the Pirates in the National League East standings in spite of winning 23 of 34 games in September and finishing with an impressive 95-65 record.

In addition to the sources cited in the Notes, the author consulted Baseball-Reference.com and Retrosheet.org.The author was present at this game.

1 Six of Montreal’s eight starting position players were 25 or younger, including Gary Carter and Andre Dawson. Another youngster, Tim Raines, made his major-league debut on September 11, 1979, five days before his 20th birthday.

2 The Expos were part of a mediocre five-team pennant “race” in 1973. Although they weren’t mathematically eliminated until the final weekend of the season, Montreal didn’t spend a single day in first place that year. The Expos finished fourth with a 79-83 record, 3½ games behind the pennant-winning New York Mets, who finished with a modest 82-79 mark.

3 While a salary of $300,000 per season is modest by recent MLB standards, one must consider that the major-league minimum salary was $16,000 per year when Cash signed his contract with the Expos on November 17, 1976.

6 Staub was dealt from the Expos to the New York Mets on April 5, 1972, for Ken Singleton, Mike Jorgensen, and Tim Foli. Seven years later, aged 35, he returned to Montreal in a July 20, 1979, trade with the Detroit Tigers.

7 The Expos played an incredible eight doubleheaders in September 1979. Two were scheduled twin bills, but the other six were caused by rainouts.