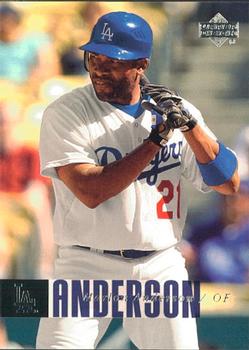 The 2006 version of the Los Angeles Dodgers was one of the franchise’s greatest offensive teams. The Dodgers had the second most runs scored by a Los Angeles team, 820 (22 behind the 1962 squad, which played three more games). They weren’t known for hitting home runs, with only 153 for the season, second to last in the National League. But on September 18, with first place in the NL West on the line, the Dodgers put on an unprecedented power display in a game with repeated changes of fortune.

The Dodgers were finishing up a four-game series at home against the first-place San Diego Padres and were a half-game back. A 3-1 win in the series opener on September 15, behind 40-year-old Greg Maddux, had given Los Angeles a 1½-game lead over San Diego, but the Padres had responded by pounding the Dodgers, 11-2, in the series’ second game and pushing across a ninth-inning run for a 2-1 win a night later, knocking Los Angeles from first place for the first time since August 9.

The Padres had won 13 of the 17 previous meetings with the Dodgers and their half-game lead in the NL West was viewed as almost their right. The Padres were battle-tested while the Dodgers relied on many rookies. “We’re built for games like this,” said the Padres’ Dave Roberts. “We have guys who have been here before, who understand what happens when the pressure mounts.”1

Night games at Dodger Stadium are known for being low-scoring affairs, in which home runs are infrequent because of the infamous Marine Layer, a term used to describe the cooler weather that prevails in parts of the region that get onshore breezes from the Pacific.2 However, the Marine Layer is seasonal, most commonly occurring in May and June. September and October are often some of the hottest months in California.

And on September 18, 2006, the game-time temperature was a balmy 80 degrees. It would cool off at night, but not all that much.

The Padres scored four runs in the top of the first off Penny, who appeared to have little to offer in the way of fooling San Diego hitters. However, the Dodgers started pecking away at Peavy and thanks to RBI doubles from Jeff Kent and J.D. Drew and solo homers by Marlon Anderson and Rafael Furcal, the Dodgers tied the game at 4-4 after three innings.

The bullpens were in charge from the sixth inning on – normally a strength for each team. But not on this night. The Padres scored five runs off Jonathan Broxton and Takashi Saito and the Dodgers managed a run off Scott Linebrink. The Padres led, 9-5, going into the bottom of the ninth.

The four-run lead meant that it was not a save situation. So Padres manager Bruce Bochy decided not to call on his future Hall of Fame closer, Trevor Hoffman. Instead, he brought in Jon Adkins.

The first batter Adkins faced was Jeff Kent. On the second pitch to him, Kent homered deep to center to make it 9-6. J.D. Drew followed: Four pitches later, it was 9-7 after another homer, this one landing two-thirds of the way up in the right-field pavilion. The remnants of the Dodger Stadium crowd began making U-turns and heading back to their seats.3

Bochy brought in Hoffman to replace Adkins. Up to bat was rookie catcher Russell Martin, whose father had flown in from Montreal to watch the game.4 Martin hit Hoffman’s first pitch for a home run just over the left-field fence to make it 9-8.

The crowd was now extremely interested, and quite loud despite the late hour on a school night.5 Up to bat was Marlon Anderson, an August 31 acquisition from the Washington Nationals. He had been 12-for-28 so far in his short time in Los Angeles, and Dodgers manager Grady Little had given Anderson the left-field job over rookie Andre Ethier to keep his bat in the lineup.

Hoffman threw one pitch to Anderson. Anderson hit it just over the right-field fence to tie the game at 9-9. For the first time in major-league history, a team down four runs in the ninth had tied the game on four straight solo home runs. It was the first save Hoffman had blown against the Dodgers since 2001. Hoffman got fly outs from Julio Lugo, Ethier, and Furcal and managed to preserve the tie.

In the 10th, the next man up for the Dodgers on the mound was veteran Aaron Sele. San Diego catcher Josh Bard tagged him for a two-out RBI double to give San Diego a 10-9 lead.

Bochy did not like to use Hoffman for more than one inning, so he brought in Rudy Seanez, who was in his fourth of four stints with San Diego. (He would also have two different tours with the Dodgers.) “We could have pushed [Hoffman], but I would have felt worse if we had pushed him and something would have happened,” Bochy said after the game.6

Seanez walked Kenny Lofton to lead off the inning. That brought up first baseman Nomar Garciaparra, who was a relatively quiet 1-for-5 in the game. Seanez fell behind 3-and-1 and then left a pitch over the plate. Garciaparra swung, dropped the bat and admired a shot that went into the left-field pavilion. The Dodgers had come all the way back to win, 11-10, and move into first place. “When I was rounding the bases, I couldn’t wait to get home and hug everybody. It was like a group hug, because it was a group effort,” Garciaparra said.7

The Dodgers finished with 19 hits, including seven home runs. None of the Padres’ 15 hits were homers, but they benefited from eight walks (three of them intentional) from Dodgers pitching. Despite scoring 11 runs, the Dodgers were just 3-for-13 in at-bats with runners in scoring position.

The next day the Dodgers lost to the Pirates, 10-6, to fall back into second. They finished the regular season tied with the Padres for first at 88-74, with San Diego being declared division champs because of the teams’ head-to-head record. The Dodgers went on to face the Mets in the playoffs as the wild card and were swept in three games. The Padres fell to the eventual World Series champion Cardinals in four games.

In addition to the sources cited in the Notes, the author relied on the Baseball-Reference.com and Retrosheet.org websites for pertinent material and the box scores noted below. The author also reviewed a video of the Dodgers’ four ninth-inning home runs and Garciaparra’s game-winner in the 10th, available at the YouTube link noted below.

2 California-Nevada Applications Program, Scripps Institute of Oceanography, “What Are Marine Layer Clouds and How Do They Form?,” available at http://meteora.ucsd.edu/~iacob/ml_formation.html (last accessed July 5, 2021).

4 “Even Fans Were Part of the Comeback.”

5 “Even Fans Were Part of the Comeback.”

6 Bill Shaikin, “What Are the Chances? Players Tell What It Was Like to Be a Part of Monday’s Power Performance, Which Ranks High in Dodgers Lore,” Los Angeles Times, September 20, 2006: D1.