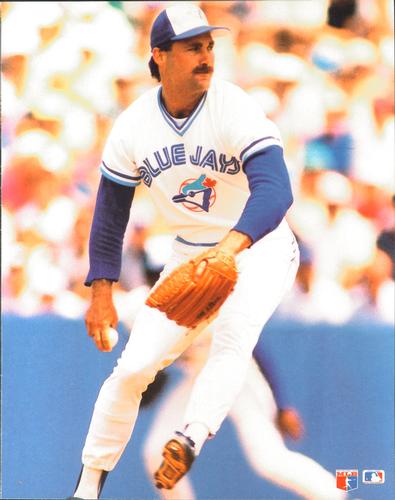 If there was ever a pitcher who was the face of bad luck, it had to be Dave Stieb. Three times, the ace right-hander of the Toronto Blue Jays was one out away from pitching the franchise’s first no-hitter. All three times, he came up empty. On September 24, 1988, at Cleveland Stadium, Julio Franco hit a routine grounder to the right side of the infield but the ball took an unexpected high hop over the head of startled second baseman Manny Lee for a single, ending Stieb’s no-hit bid.

Six days later, in Toronto in his next and final start of the season, Baltimore pinch-hitter Jim Traber flared a drop-shot single down the right-field line with one out to go, breaking up Stieb’s second consecutive gem.

Finally, on August 4, 1989, pitching in Toronto’s newly-opened futuristic SkyDome, Stieb struck out 11 and retired the first 26 Yankees in order but Roberto Kelly lined a 2-0 slider for a double into left field that spoiled a third no-hit bid – a perfect game attempt – for Stieb that again, came down to the last out.

On this late summer afternoon in Cleveland, the Blue Jays handed the ball to their star-crossed ace, looking to get back in the hunt for the American League East Division title. In just two weeks, Toronto had dropped out of a first-place tie, falling 6½ games behind the Red Sox. Stieb, at least, was on his way to finishing 1990 with an 18-6 record and a 2.93 ERA. In what would be his last good season, his 18 wins established a new team pitching record for single-season wins and his ERA ranked fifth in the league. Meanwhile, the Indians were completing another mediocre season, but were gathering promising young prospects such as Carlos Baerga, Albert Belle, Charles Nagy, and catcher Sandy Alomar Jr. who would win the 1990 American League Rookie of the Year Award. Even so, the Blue Jays had won the first two of the holiday weekend three-game series and were 7-2 on the season against the Tribe.

As Stieb warmed up in the visitors’ bullpen, he didn’t feel totally sharp. “His stuff was okay, he was growling a bit about it but he’s a perfectionist,”1 said pitching coach Galen Cisco, hours later.

The game began under cloudy skies when Stieb walked speedy Cleveland lead-off man Alex Cole. After Stieb threw over to first base four straight times, Cole took off for second but battery-mate Pat Borders helped out Stieb by throwing out Cole. Borders did it again in the second, throwing out Baerga, attempting to steal, to end the inning.

In the third, Stieb struck out the side. He was then staked to a lead in the top of the fourth when first baseman Fred McGriff launched a solo home run the opposite way to left-center field. The Blue Jays doubled their lead the next inning when Kenny Williams and Manny Lee hit back-to-back doubles off Cleveland starter Bud Black.

Meanwhile, Stieb found his groove. He retired Cleveland in order in the fourth and fifth innings then struck out the side for a second time in the sixth. Remarkably, since Cleveland first baseman Brook Jacoby flew out to left for the second out of the second inning, Stieb had not allowed an Indian to hit the ball out of the infield, setting down 12 straight batters on eight strikeouts, three groundouts and an infield popup.

Still, Stieb reflected after the game that he wasn’t as sharp as he would have liked. “I didn’t have great control. I couldn’t find my release point in the early innings. I hung pitches but got away with them. They helped me out a few times by swinging at bad pitches. They hit balls right at people,” he said.2

“We were doing what we could to break Stieb’s concentration. We were yelling at him from the bench, trying to do anything to get him out of his rhythm,” said Tom Brookens, Cleveland’s third baseman. “The thing that makes him so tough is that he has a hard slider that doesn’t break a whole lot, another slider that breaks a foot or more and a curve,” Brookens added.3

As the pregame clouds melted away, batters now had to deal with pitches coming from the bright mound area into the darkness at home plate and with Stieb regaining command of his arsenal of pitches, he coaxed the first two batters to ground out to the middle infielders to begin the seventh. Cleveland finally hit the ball into the outfield, when Dion James’ drive to right-center was caught by a hustling Williams to make it 15 straight retired in order.

Veteran Ken Phelps led off the bottom of the eighth and lined an inside slider hard down the right field line…but the ball landed just foul. No-hit king Nolan Ryan once said about a ball drilled right at a teammate during one of his no-hitters, “A foot or two either way, it was a base hit, maybe a double to the wall. It shows how much luck goes into throwing a no-hitter.”4 On this afternoon, Stieb strangely, was the beneficiary of good luck.

Would this finally be his lucky day?

Stieb pitched carefully to Phelps, staying outside and walked him. Down by only two runs, the next three Indians’ batters swung early hoping to get a hit, but Stieb efficiently used just four pitches to stifle any chance of a Cleveland rally by inducing three straight fly balls to end the inning.

In the top of the ninth, Stieb got some breathing room. McGriff led off with his second home run of the day, capping an excellent weekend that included a 5-for-5 game the night before.5 Toronto now led 3-0 and observing the tradition of not speaking to a pitcher working on a no-hitter, the entire team gave Stieb exaggerated space on the bench.

“I think I was more nervous sitting on the bench than he (Stieb) was out there pitching,” confessed left fielder George Bell. “My hands were all sweaty, but I had a lot of confidence in Dave today.”6

Pinch-hitter Chris James began the bottom of the ninth by lofting an easy fly ball to left field. Candy Maldonado was next, also coming off the bench. The veteran slugger was on his way to a career-high 22 home runs in 1990 but was also a strikeout-prone free-swinger. After showing Maldonado mostly sliders, Stieb threw a neck-high fastball on 2-2 and got him to swing through it.

The sizeable pro-Toronto sections of the crowd that had travelled across the border to support the Blue Jays during Labor Day weekend exploded in cheers of relief and anticipation.

Here was Dave Stieb at the intersection of history and disappointment for a fourth time. Standing in his way was Cole who battled to three-ball counts in each of his first three plate appearances. Stieb approached Cole cautiously and walked him on four pitches. Borders came halfway to the mound, making a cursory attempt to break the tension, offered brief words of encouragement to Stieb who quickly took the ball and ascended the hill.

With a three-run lead, McGriff played at normal depth, off the first base bag and Cole took second on defensive indifference. The only thing that mattered now was the batter.

Stieb’s 123rd pitch of the day was a breaking ball and Jerry Browne – ironically acquired by Cleveland in exchange for nemesis Julio Franco – lined the ball to right field. It looked like a straightforward play but as the ball descended out of the bright sky towards right fielder Junior Felix, could the sun be the bearer of bad luck at the last instant? Veteran broadcaster Don Chevrier described the moment: “Into right field…He has…GOT IT! No-hitter for Dave Stieb! The long frustration is finally over! The first in Toronto Blue Jay history, recorded here in Cleveland this afternoon.”7

Stieb jogged off the mound and clasped his right hand to his cap as if disbelieving he had finally achieved what had eluded him so many times in the past. Borders was first to congratulate him and soon the entire team hoisted Stieb onto their shoulders. A relieved smile spread across his face as he shook hands with his teammates. It had taken him two hours and 27 minutes to make personal and team history.

“We all knew Dave had lost the no-hitter three times before, but me, I think positive,”8 Felix said. “I had it all the way, no problem,” he continued, referring to his difficult game-ending shadows-to-sunlight catch. “It makes me part of the glory.”9

While Felix would go down in the record books as the man who recorded the last out, it was Stieb who finally was able to bask in the glory of joining the no-hit club. For the man whose 1986 autobiography was prophetically titled Tomorrow I’ll be Perfect10, Stieb was modest in his assessment of what he accomplished.

“I can hardly believe what I did today. I wasn’t nervous and, no doubt, being there so many times before helped but like I’ve said before, I’d given up caring about no-hitters,” Stieb started, thinking back on the trail of disappointment that preceded his achievement. He echoed Ryan’s sentiments on chance and no-hitters: “I’ve come to realize that there’s just so much luck involved in a no-hitter. That’s what today was – all luck.”11

1 Larry Millson, “Outside pitches tough on Indians,” The Globe and Mail, September 4, 1990.

2 Allan Ryan, “FINALLY! Stieb gets no-hitter after five near-misses and a scary final out,” The Toronto Star, September 3, 1990.