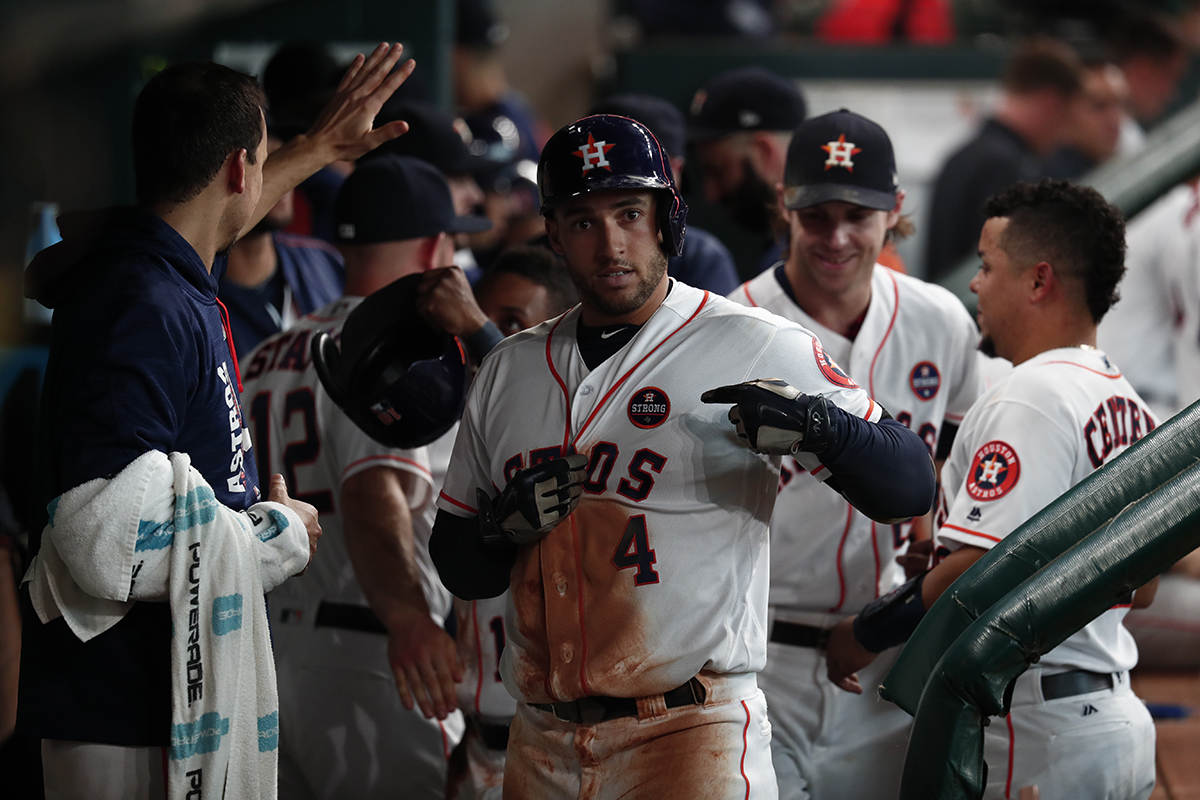 George Springer of the Houston Astros taps the “Houston Strong” logo on his chest after hitting a home run on September 2, 2017, in the team’s first game since Hurricane Harvey at Minute Maid Park in Houston.

Hurricane Harvey made landfall on the Texas Gulf Coast on August 26, 2017, and then spent the next three days dumping an unprecedented rainfall on the Houston metropolitan area. By the time the rain subsided, more than 100 people had died, thousands had been rescued, and tens of thousands of people had been displaced from their homes.

The Astros were unable to return home from Los Angeles and played a three-game series against the Texas Rangers at Tampa Bay’s Tropicana Field. It appeared as though the team might have to play additional home games on the road. However, Minute Maid Park had been spared from the worst and Houston’s mayor, Sylvester Turner, urged the Astros to return home in the hope that the team might provide some sense of normality for a city in recovery.

The Astros were scheduled to host the New York Mets on Friday, September 1, but the team received approval from Major League Baseball and the Wilpon family, who owned the Mets, to push back that game by one day, thus creating the first doubleheader ever in Minute Maid Park.1

The Astros organization contributed greatly to relief efforts in Houston by, among other things, using the Minute Maid Park kitchens to cook 5,000 meals per day that were distributed by the Salvation Army and by purchasing 20,000 school-supply kits and 11,000 backpacks for children in Houston-area school districts.2 Astros players spent September 1 visiting evacuees who were being temporarily housed at the city’s George R. Brown Convention Center, a few blocks from the ballpark. At one point, “[Jose] Altuve danced with an evacuee as [Marwin] Gonzalez watched nearby.”3

Charlie Morton, the Astros’ starter for Saturday’s first game, summed up his team’s feelings, saying, “You want the game to lift people up. You want to do right for the city. I’m really proud to be an Astro. I’m really proud to be a small part of this city and this community.”4 The Mets, who were piloted by former Astros manager Terry Collins, did their part as well, as they “not only complied with the request to play a doubleheader … [t]hey also went into the Houston community and volunteered to help victims of Harvey.”5 It was, according to longtime Astros television broadcaster Bill Brown, “an exceptional gesture on their part.”6

Prior to the opener, Astros skipper A.J. Hinch addressed the home crowd of 30,319 fans and encouraged them with the words “Stay strong, be strong, go ’Stros.” The team also unveiled a uniform patch to be worn for the remainder of the season that consisted of the team logo, the word “STRONG,” and an outline of the state of Texas. The fans hoped that the Astros, too, would continue to go strong. The team had a record of 80-53 and a 12-game lead in the AL West and had just acquired Detroit Tigers ace Justin Verlander for the stretch run, so hopes ran high for the Astros to make only their second World Series appearance and perhaps to clinch their first championship.

As the baseball fates had it, the Mets sent Matt Harvey to the mound as their game-one starter. Harvey was no longer the pitcher of “Dark Knight” fame as he struggled in his return from surgery for thoracic outlet syndrome and also had run afoul of the Mets’ front office, which had suspended him in May for violating team rules. Between his struggles and his unfortunate (for Houston fans) last name, he became the perfect whipping boy for a high-powered Astros offense that struck early and often.

The game began inauspiciously when Morton walked Mets leadoff man Jose Reyes. However, the hometown crowd got fired up when Morton then struck out Brandon Nimmo, picked Reyes off first base, and struck out Asdrubal Cabrera to end the Mets’ half of the inning. Now came the Astros’ first turn with the bats.

Leadoff batter and future World Series MVP George Springer worked a 3-and-2 count before being hit by Harvey’s sixth offering. Consecutive singles by Alex Bregman and Altuve, the eventual 2017 AL MVP, gave the Astros a quick 1-0 lead. After Josh Reddick flied out, Gonzalez doubled home Bregman and Altuve and then scored on Cameron Maybin’s base hit. Harvey retired the next two batters, but he was already in a 4-0 hole.

After Morton worked around a one-out double by Travis d’Arnaud (and a wild pitch that allowed d’Arnaud to advance to third) by striking out Amed Rosario and Dominic Smith, the Astros once again took the lumber to Harvey. Tony Kemp singled to open the Astros’ half of the second and scored on Springer’s home run to left field to give the Astros a 6-0 advantage. Altuve and Reddick banged out back-to-back one-out singles and advanced when Harvey uncorked a wild pitch with Gonzalez at the plate. After Gonzalez struck out, Harvey unleashed another wild ball while pitching to Maybin that allowed Altuve to score Houston’s seventh run of the game. Harvey managed to make Maybin his second strikeout victim of the inning, but his afternoon was at an end after 70 pitches and seven earned runs allowed that inflated his ERA to 5.97.

Morton allowed hits by Juan Lagares and Reyes in the third, but he struck out the side and continued to keep the Mets off the scoreboard for one more inning. The Mets finally got to Morton in the fourth when Rosario smacked a two-out double that Smith followed with a two-run homer.

The Astros immediately recouped those runs against Mets reliever Tommy Milone in the bottom of the fourth when Bregman walked, Altuve doubled, and Reddick drove them both home with a single to right field. After Morton hung another zero on the Mets, J.D. Davis gave the Astros a 10-2 advantage with a leadoff homer in the bottom of the fifth inning.

At this point, Hinch decided that there was no need to overextend Morton, who had struck out nine and allowed only two runs over his five innings of work, and he sent Francis Martes to the hill in the top of the sixth. Martes navigated the sixth inning successfully, but the partisan crowd began to worry as the Mets climbed back into the game in the seventh. After two walks, a wild pitch, and an error by Bregman, who was playing shortstop — rather than third base — for the injured Carlos Correa, Hinch pulled Martes in favor of Will Harris. The Astros hurler provided no relief on this occasion. With the bases loaded and one out, Harris threw gas on the fire rather than putting it out. First he allowed an RBI single to Cabrera. The next batter up, Wilmer Flores, hit a grand slam that drew New York to within three runs of the Astros.

The Astros’ offense recovered two of those runs against Jamie Callahan, the fourth Mets pitcher of the afternoon. Davis led off the bottom of the seventh with a double, which was followed by consecutive singles off the bats of Juan Centeno and Kemp, the latter of which drove in Davis. Kemp eventually came around to score Houston’s 12th and final run when Cabrera made a throwing error from third base on Tyler White’s grounder. Cabrera atoned for that error with a ninth inning round-tripper off Tyler Clippard, but it was too little and too late as the Astros prevailed, 12-8.

After the game, Astros star Springer said, “There are thousands of people who don’t have homes, don’t have belongings, and they are rallying around us. And it’s our job as the sports team to do anything we can to provide anybody with some sense of relief, some sense of [a] break.”7 Steven Crenshaw, a firefighter from The Woodlands (a Houston suburb), who was in attendance with his three children, agreed with Springer’s sentiments, saying, “We’re here at America’s game … and there’s never been a time when I personally have been more proud of this city. … I need to be here.”8

Crenshaw and all Houstonians got what they needed from the Astros in the team’s first game back home. 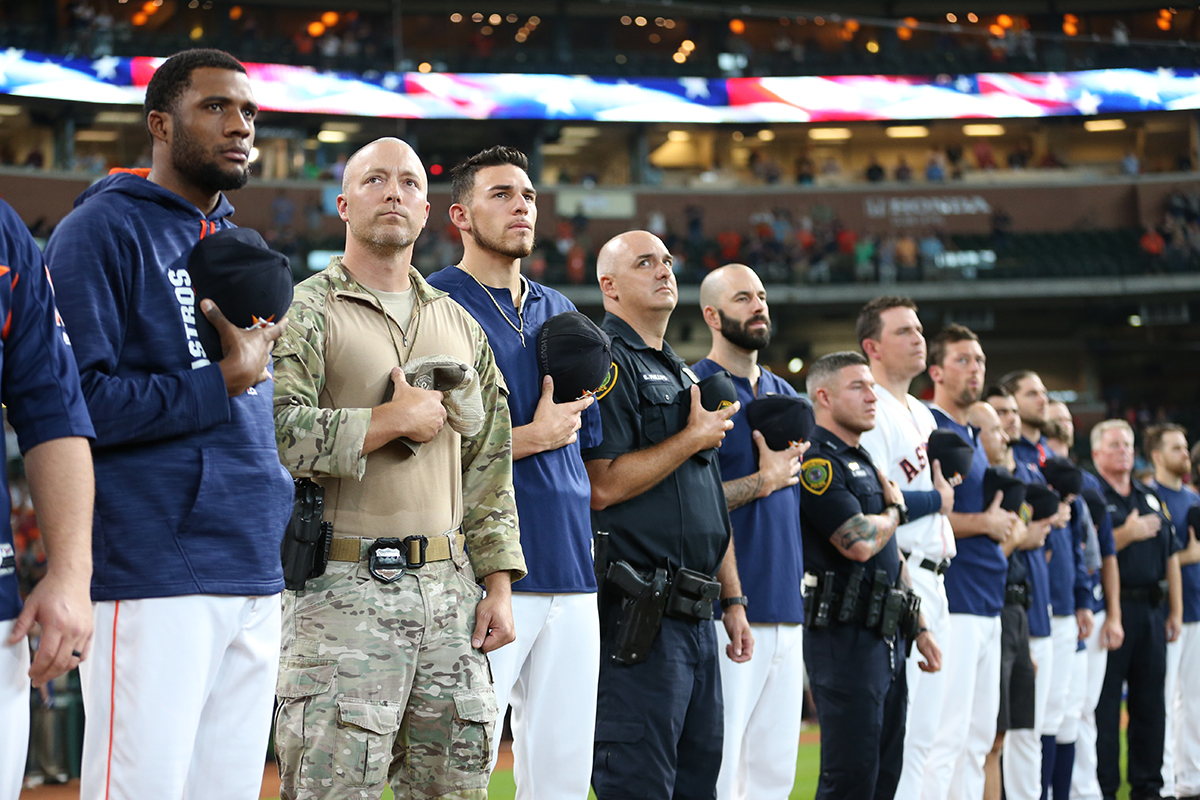 Houston Astros players stand with first responders during the National Anthem before the team’s first game since Hurricane Harvey on September 2, 2017, at Minute Maid Park in Houston.

Most Astros home games from the 2017 season now carry the taint of the team’s elaborate sign-stealing scandal. As a 28-year resident of the Houston area and a longtime Astros fan, this author was dismayed by the great lengths to which certain members of the team went to gain an unfair advantage, though teams and players have engaged in such behavior for as long as organized baseball has existed. Whatever anyone — Astros fans or otherwise — may now think of the 2017 team, it remains a fact that the Astros provided a great lift to the city of Houston both in terms of their performance, which culminated in a World Series championship, and in terms of their contributions to the community. It is for the latter reason — the care and concern that they demonstrated for their fellow citizens — that I choose to view their on-field transgressions as an unfortunate lapse in judgment rather than to demonize them as unethical human beings across the board as so many people have opted to do.

The author consulted baseball-reference.com and retrosheet.org for the box score and play-by-play of the game.

Photos: Courtesy of the Houston Astros

2 Joe Holley, Hurricane Season: The Unforgettable Story of the 2017 Houston Astros and the Resilience of a City (New York: Hachette Books, 2018), 100.

8 Brian T. Smith, “After the Rainfall; With the Storm Behind Us and a Lot Of Rebuilding Ahead, Fans Take a Breather Because Baseball Is Back in Town,” Houston Chronicle, September 3, 2017: C2.