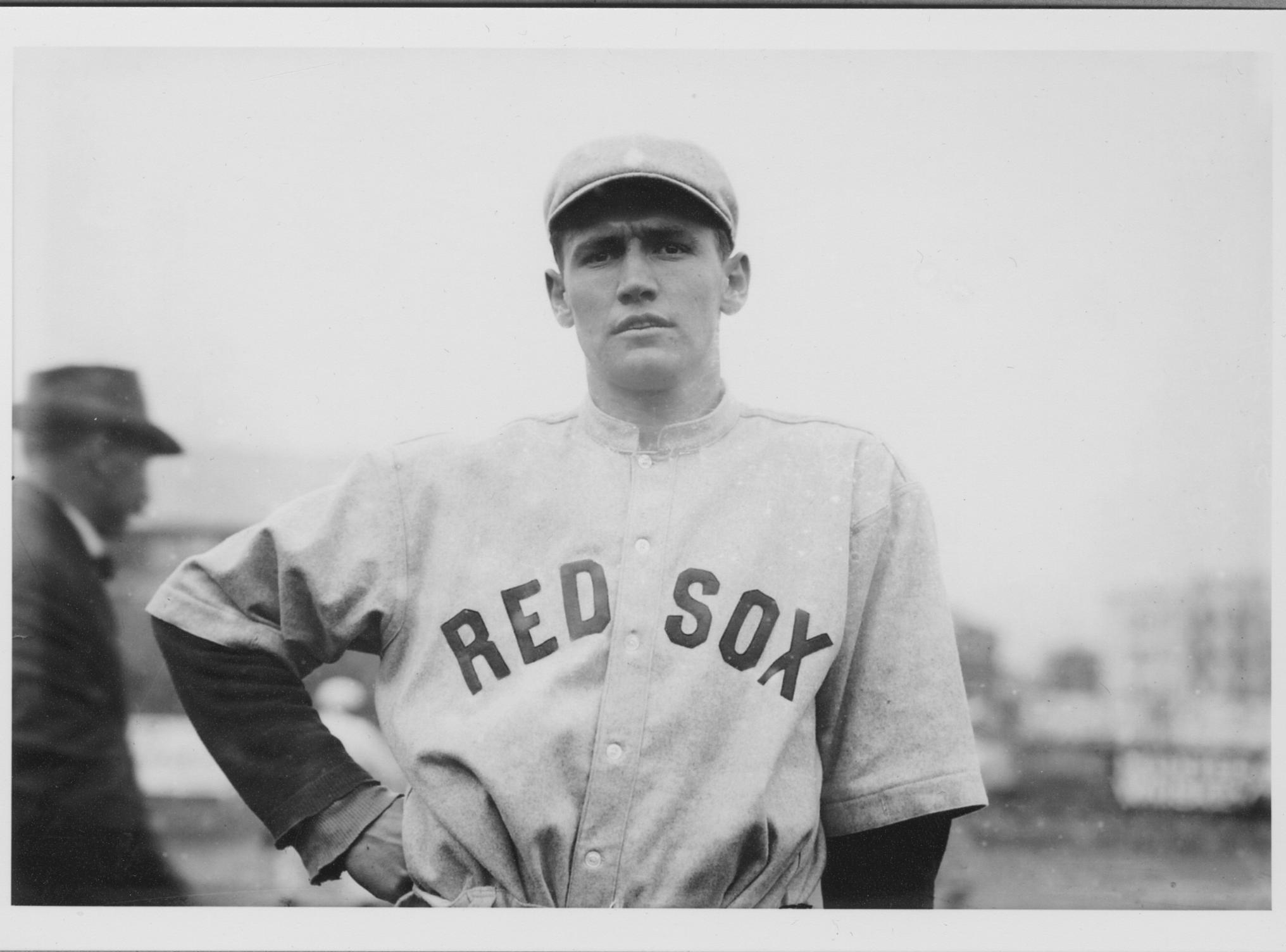 For both major leagues, 1912 “was a banner year for streaks by pitchers,” as noted at the start of a SABR article on such accomplishments.1 Future Hall of Famers in each league had already tied or set records for consecutive wins as the Tigers prepared to face Red Sox ace Joe Wood during the second half of September. In the NL, Rube Marquard of the New York Giants started the season with 19 consecutive wins to tie Tim Keefe’s record, set in 1888 with the same franchise. In short order, Washington’s Walter Johnson broke the previous AL record of 14 straight and got as far as 16 by beating the Tigers on August 23.

Almost immediately, Howard Ellsworth “Smoky Joe” Wood, in his fourth full AL season at age 22, had a streak reach 13. As a result, strong interest built for a game on September 6 when it was announced that he would start a day ahead of schedule and counter none other than Johnson. “On September 6 a circus-like crowd estimated at 35,000 packed every crevice of Fenway Park — filling the stands, outfield and even foul territory along the right- and left-field foul lines — and cheered wildly with every strike Joe burned across,” wrote Michael Foster, Wood’s SABR biographer. “In the end, Joe prevailed 1-0, a victory made possible when back-to-back fly balls by Tris Speaker and Duffy Lewis (which would have been playable under ordinary circumstances) fell untouched into the crowd and were ruled doubles. Nine days later, Joe tied Johnson’s record with a 2-1 victory over St. Louis.”2 That game against the Browns also impressed. “Wood won in one of the greatest pitching engagements ever staged in any ball park,” The Sporting News enthused.3

Many fans across America would be eager to learn the outcome of Wood’s next start, in Detroit on Friday, September 20. The big game’s crowd of 3,115 was about 2,000 below the average for the new Navin Field, though a day earlier just 558 watched the Tigers defeat New York.4 Boston arrived two days after clinching the pennant. The Tigers began play with a record of 67-75.

Detroit manager Hughie Jennings had recently been starting pitchers who made their major-league debuts that month. The assignment opposite Wood went to William Wilkes “Tex” Covington, 25. His major-league career began in 1911 with a record of 7-1. He had already started eight games for the Tigers in 1912 and earned a complete-game victory six days earlier. Jennings’ lineup included four regulars in the first six slots, plus Bobby Veach, at the start of a 14-year career.

Boston was retired in order in the first inning. Donie Bush started the bottom of the inning by beating out a ball hit to 23-year-old rookie Marty Krug at shortstop, who was subbing for Heinie Wagner. Red Corriden then grounded to Krug to begin a double play, and Sam Crawford was retired for the third out.

Boston’s first baserunner came with two out in the second when Covington walked Clyde Engle, who was subbing for player-manager Jake Stahl at first base because Stahl was serving a three-game suspension after a dustup with an umpire in Cleveland the day before. However, Covington picked Engle off to end the inning. In the bottom of the second, Ty Cobb grounded out to Wood and the next two hitters struck out.

Boston was again retired in order in the third inning. In the bottom half, Wood struck out Eddie Onslow and retired Eddie’s older brother Jack on a grounder. That brought up Covington with the bases empty. After having had no trouble with the first eight batters, Wood walked four in a row — the opposing pitcher and the next three batters — forcing in a run. This set the stage for a pivotal moment. As a Boston reporter put it, “Krug muffed a puny fly raised by Cobb and two more runs came across.”5 Wood was finally able to induce a groundout by Veach.

Leadoff man Harry Hooper started the fourth frame for Boston by beating out an infield hit. Covington caught Hooper napping at first base but his pickoff throw got past Eddie Onslow and the runner took second. Hooper advanced to third on a groundout; another by future Hall of Famer Tris Speaker enabled Hooper to score. One more groundout ended the inning. Wood retired the Tigers in order in the bottom half, notching another strikeout in the process.

In the top of the fifth inning, bases on balls again led to a run, this time enabling Boston to battle back. Larry Gardner drew the first walk. He moved to second on a passed ball and then Engle walked. That brought up Krug. Soon enough, Covington complained loudly enough about a call by umpire Frank “Silk” O’Loughlin on a pitch to Krug and was ejected (by the first umpire ever to eject Cobb, in 1908). Jennings had to bring in a new hurler, and chose veteran Joe Lake.

On Lake’s first offering, Krug singled to center, though Gardner stopped at third. Catcher Hick Cady came up with the bases full and none out. He hit sharply to Bush, who stepped on second to force Krug but threw wildly to first when trying to double up Cady. That allowed the two lead runners to score and tie the game, 3-3. Wood batted next, and singled to left. Hooper followed by hitting a ball that drew Eddie Onslow away from first but neither Lake nor Louden covered that bag so the bases were loaded again with just one out. After a popup for the second out, up strode Speaker. He grounded to Louden at second but a poor throw drew Onslow’s foot off the bag, and the Red Sox had taken the lead. Lake succeeded in striking out Gardner to end the rally.

Lake then started the bottom of the inning with a single. Wood retired Bush on a popup to Krug, but Corriden singled to center and Lake advanced to third as Speaker had trouble controlling the ball. Corriden then stole second. Crawford followed by singling right up the middle to plate both runners and put the Tigers back on top, 5-4. Crawford took second on Speaker’s throw homeward and stole third while Cobb batted, but Wood ultimately struck out Cobb and retired Veach.

Except for a two-out walk to Krug, Boston went quietly in the top of the sixth. Louden led off the bottom half by walking, but Eddie Onslow grounded to Krug, who started another double play. Wood then struck out Jack Onslow. In the top of the seventh, the Red Sox were retired in order. In the bottom half Lake again led off by singling. He was bunted into scoring position but Wood struck out Corriden and Crawford popped out to Krug.

Speaker began Boston’s eighth by drawing a free pass. Lake struck out Lewis. Gardner then worked the count full, and Speaker took off for second just before Gardner knocked a fly toward Crawford in right field. Whether a coach or Speaker was to blame, Crawford made the catch and easily doubled Speaker off first to end the inning.

Cobb led off the bottom of the eighth by beating out an infield hit but he slid into first and hurt his ankle. Thus, when Veach smashed a line drive over Speaker’s head, Cobb only reached third and Veach settled for a double. Smoky Joe secured the first out when Louden hit a fly right back to him. Next up was Eddie Onslow, who grounded to Gardner at third. Gardner may have been overconfident about Cobb’s ankle, and threw to first only to have Cobb suddenly sprint for home. With a skillful slide, Cobb gave the Tigers an insurance run before Wood recorded the third out.

Boston was retired in order in the ninth, and the contest ended with Wood on deck. “American league (sic) history will have to struggle along without the immediate establishment of any new records,” began the story in the Detroit Free Press the next day by Edward A. Batchelor.6

Under the scoring standards of the time, Tex Covington was credited with the victory. The game would prove to be Covington’s major-league finale, so his career concluded with an ejection. Wood made two more regular-season starts and won both, for a record of 34-5. He then won three of the eight World Series games as Boston defeated Marquard’s Giants.

Wood never enjoyed such success again. His pitching career went downhill after he broke his thumb at Navin Field on July 18, 1913, after slipping on wet grass while fielding a ball. Wood was sold to Cleveland in 1917 and converted to the outfield, which extended his career through 1922. The record shared by Johnson and Wood was tied in 1931 by Lefty Grove of the Philadelphia Athletics and in 1934 by the Tigers’ Schoolboy Rowe.

4 Many box scores at the time omitted attendance totals, but examples of ones that reported it include the Washington Herald, September 21, 1912, 10, and the San Francisco Call, September 21, 1912, 16, which printed very different accounts of Wood’s attempt to break the newly set record. In addition, attendance data was reported daily in the “Told in a Nutshell” chart of the Boston Post.

5 Charles E. Young, “Tigers Put End to Joe’s Record,” Boston Post, September 21, 1912, 6. Many play-by-play details are paraphrased from Young’s account. Others are from “Champion Red Sox Pay Final Visit,” Detroit Times, September 20, 1912. Though its overview of the game was terse, the paper documented every play through the top of the eighth inning.