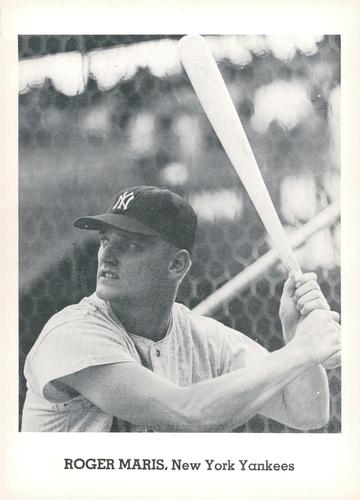 Wednesday, September 20, 1961, offered the last chance for Roger Maris to pass Babe Ruth’s record of 60 home runs within Commissioner Ford Frick’s 154-game deadline for being credited with breaking The Babe’s sacrosanct mark.1 Maris came into the game with 58 home runs. To beat Ruth’s mark, he would have to do something he had never done before: hit three home runs in one game. And he would have to do it in Baltimore, The Babe’s hometown.

Maris’s quest came in the same year baseball and the Yankees experienced changes. The 1961 season saw expansion with the Washington Senators and Los Angeles Angels entering the American League, diluting pitching talent and expanding the season from the traditional 154 games to 162. In the Yankees’ dugout, Ralph Houk replaced Casey Stengel, the Ol’ Perfessor. Throughout the summer of ’61, the first summer of the Kennedy administration, Maris and teammate Mickey Mantle launched an assault on the Bambino’s record.

By July 1, both Maris and Mantle were ahead of Ruth’s pace.4 Some media members and fans, who revered Ruth, felt it unfair that Maris and Mantle would have eight additional games in which to hit 60. In addition, Ruth’s defenders argued, Maris and Mantle feasted on diluted expansion pitching. Commissioner Frick, Ruth’s former ghostwriter, agreed. He declared that if a player took more than 154 games to hit 60 home runs, there would be a distinctive mark in the record books attached to the accomplishment, showing that the player achieved it with the benefit of extra games.

The pressure intensified in the second half. In the race between Mantle and Maris, most fans were pulling for Mantle. Maris, in his second season with New York after spending time with Cleveland and Kansas City, was portrayed as a shy hick from North Dakota, while Mantle was the rightful heir to Ruth, Gehrig, and DiMaggio.5 Though the two were friendly (Mantle even lived with Maris and Bob Cerv during the ’61 season), the press made them out to be rivals. As Mantle and Maris made their run at Ruth, Maris experienced scrutiny unrivaled in baseball history, which even caused his hair to fall out. As the season neared its end, Mantle, hampered by injuries, fell behind Maris and conceded he would not make it, going so far as to telegraph his concession to Ruth’s widow.6

Maris hit his 58th home run on September 17 off the Tigers’ Terry Fox. The blast came in the 12th inning and gave the Yankees a 6-4 win. The Yankees played a doubleheader on September 19. Maris came into the twin bill with 58 home runs and left still two behind Ruth, held in check by Steve Barber in the first game and Hal Brown and Hoyt Wilhelm in the second. Before the September 20 game, Maris tearfully pleaded with Houk to give him the day off, but Houk reminded Maris the fans expected him to play.7

On the mound for Baltimore was Milt Pappas, a 12-game winner. He was opposed by Ralph Terry, who went 16-3 with a 3.15 ERA in 1961. A crowd of 21,032 was on hand for the game, less than expected, in part because Hurricane Esther had just finished pounding the Mid-Atlantic region. The game had a special national, prime-time broadcast. Maris’s wife, Pat, watched from Kansas City, while Commissioner Frick and The Babe’s widow, Claire, watched from their New York homes. Mantle sat out the game, the second game in a row he missed.8 Without Mantle batting behind him, as he had most of the season, Maris was protected by Yogi Berra, the catcher-turned-outfielder nearing the end of his Hall of Fame career.

With one out and Bobby Richardson on first after an error by Orioles second baseman Jerry Adair, Maris came to the plate for his first at-bat. He rocketed a drive to right field, but the wind held it up. The ball settled into the glove of Orioles right fielder Earl Robinson for the second out of the inning. Berra strode to the plate and hit a single to put two men on. But Johnny Blanchard grounded out to end the half-inning. In the bottom half, Terry retired the Orioles in order.

In the top of the second, the Yankees made it 1-0 when Bill Skowron tripled with one out and Clete Boyer drove him in. In the bottom half, Terry again retired the Orioles in order.

In the top of the third, Maris had his second at-bat. On a 2-and-1 count, he connected for number 59, a “beautifully arched shot that cleared the fourteen-foot wall and sailed into the right-field bleachers.”9 Maris was now only one home run away from tying Ruth’s mark, two away from breaking it. And he had two, maybe three, at-bats left. The Yankees scored two more runs in the third. Berra followed Maris with his own blast, and Elston Howard doubled home Blanchard to make it 4-0, Yankees.

Maris batted again in the fourth, this time against Dick Hall. Hall used a funky side-arm delivery that made it difficult for hitters to pick up the ball.10 He struck Maris out on a fastball away. Terry continued his dominance, needing only the minimum for the first five innings. But in the sixth Baltimore put together three singles, a walk, and an error to make the score 4-2.

After Kubek grounded out to lead off the seventh, Maris again faced Hall. With one strike, he got into an offering, but drove the ball foul along the right-field line. On the next pitch, Maris squared the ball up. Off the bat, the question was whether it was number 60. But on a windy night in Baltimore, Maris’s shot died in the wind and settled into Earl Robinson’s glove for the second out. “I thought Ruth was up there and knocked it down,” said Blanchard.11 If the fates had been kinder to Maris, he could have already surpassed Ruth’s record, but on this windy night, he was still one home run short. Up next, Berra grounded out to leave the score 4-2, Yankees. With only six outs left for the Yankees, they would need to get some men on if Maris was going to get another at-bat. And they did. In the top of the eighth, Blanchard doubled to right and Skowron was intentionally walked, meaning Maris would get another at-bat.

Maris had one final chance to tie Ruth in the ninth. He faced Hoyt Wilhelm, a future Hall of Famer with a nasty knuckleball. Despite trailing, Orioles manager Luman Harris brought Wilhelm in to make it difficult for Maris to hit number 60. Wilhelm said his adrenaline was flowing as much for this at-bat as it ever had.12 Wilhelm’s first pitch struck Maris’s bat and went foul. On the second pitch, Maris hit a long foul ball to right field. On the right-hander’s third pitch, Maris checked his swing and made contact, tapping the ball slowly along the first-base line. Wilhelm retrieved the ball and tagged Maris out. Ruth’s feat of 60 home runs in 154 games would remain untouched.13

Still, the Yankees needed three outs to clinch the pennant. Terry remained on the mound and retired Baltimore in order, finishing his day allowing only two runs (one earned) and four hits with eight strikeouts. For the 26th time, the Yankees had won the pennant.

After the game, Maris told reporters he intended to concentrate on “straightening [himself] out for the World Series.”14 Asked about the potential for an asterisk if he went on to hit one or more home runs, he said: “Commissioner Frick makes the rules. If all I get is an asterisk, that will be all right with me.”15

The Yankees were heading back to the World Series for the 11th time in 13 years, and the team could have fun pouring champagne over one another to celebrate the clincher. The team had eight games left in the season to get ready for the Series. And Maris had eight more games to continue gunning for Ruth’s record, asterisk or not.

1 The game was actually the 155th game for the 1961 Yankees. The second game of a doubleheader on April 22 had been called after seven innings and a 32-minute rain delay, and was replayed in its entirety. Though the statistics from the seven-inning game counted, the game did not result in a decision, and the media, teams, and commissioner treated the game on September 20 as the Yankees’ 154th game.

8 Mantle did not start the first game of the doubleheader, but did pinch-hit.