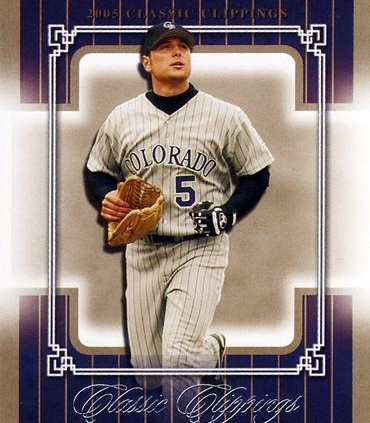 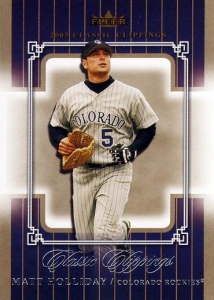 The San Diego Padres and Colorado Rockies launched their 2005 seasons with vastly differing sets of expectations. The Padres were coming off of an 87-75 record during the previous season and had aspirations of winning the National League West championship and advancing to the playoffs for the first time since 1998. The Rockies, on the other hand, had already experienced four consecutive losing seasons. Their forecast called for considerable adversity as they were dependent upon a young and relatively inexperienced major-league roster.

Perhaps the two most memorable games for the Rockies during the 2005 campaign came against the Padres at Coors Field. The teams opened their seasons in the afternoon of April 4 and it proved to be a wild, back-and-forth affair in which the Rockies touched up Padres starter Woody Williams for a quick four runs in the first inning only to find themselves on the short end of a 10-8 score as they entered the bottom of the ninth with Trevor Hoffman coming on to close it out for the Padres. With two outs, Cory Sullivan and Aaron Miles delivered hits against Hoffman to tie the game. Clint Barmes then put an exclamation point on the rally by sending the first pitch he saw into the left-field bleachers to deliver the Rockies a 12-10 walk-off victory. The Opening Day win marked the only time that the Rockies were above .500 for the entire campaign. In fact, manager Clint Hurdle’s team lost 35 of its next 49 games to squelch whatever shred of optimism had permeated the clubhouse on Opening Day.

The second noteworthy game involving the Padres and Rockies took place on September 20. The Padres had not played up to their expectations but still had a five-game lead in the uncustomarily weak National League West. They carried only a 75-74 record into the encounter at Coors Field and were in danger of accomplishing the dubious feat of being the first major-league team to earn a postseason berth while carrying a losing record. The season was coming to a merciful close for the Rockies by this point, as they had long since clinched last place in the NL West and their immediate goal was to acquire the two wins that would enable them to avoid a 100-loss season.

An announced crowd of 18,336 was present. The unusually small crowd was an indication of the sense of despair felt by Rockies fans; the 2005 season would turn out to be the only season in which the team would draw fewer than 2 million fans. Jamey Wright started the game for the Rockies with Woody Williams returning to the scene of the Opening Day crime to take the mound for the Padres. In the opener, Williams lasted only 3⅓ innings and had allowed nine hits and six earned runs and so he likely approached this encounter with a desire for retribution offset with some level of trepidation.

Future Dodgers manager Dave Roberts led off the Padres first inning and lined out to right fielder Dustan Mohr. Ramon Hernandez provided a two-out single but that was all the Padres could muster off Wright in their opening frame. The Padres could only have wished for a similarly uneventful start from the Rockies’ batters. Barmes started the bottom of the first for Colorado with a single to left. It was followed by Sullivan’s groundball to second baseman Mark Loretta, whose throw to Khalil Greene was dropped by the shortstop for an error. This act of generosity was followed by a Todd Helton single that plated the first run and Matt Holliday’s deep drive to center field that enabled Sullivan to jog home with the second run. Garrett Atkins then tripled to deep center field, scoring Helton. The Rockies were just getting started as Luis A. Gonzalez singled home Atkins and Mohr sent a 1-and-1 pitch over the wall for a two-run homer that made it 6-0. The bottom of the Rockies order also proved problematic for Williams: Consecutive doubles by Danny Ardoin and Wright made it 7-0. Williams had to work through the top of the order for a second time in the opening inning but retired Barmes on a fly ball and Sullivan on a groundball to second. It was evident that Williams’s revenge tour had gone off the rails early as the scoreboard read 7-0 after the initial frame.

Wright retired the Padres on just 10 pitches in the second before the Rockies resumed their run-scoring endeavors with consecutive doubles by Helton and Holliday. It was apparent by this point that Williams had been completely unable to deceive the Rockies hitters. Williams had retired only three batters and had yielded nine hits and nine runs, of which eight were earned. Control was not an issue: 28 of his 44 pitches were for strikes but he had yet to achieve a swing-and-miss. The frequent loud contact was too much for Padres manager Bruce Bochy, who removed Williams in favor of Scott Cassidy. Order was temporarily restored as Cassidy struck out Garrett Atkins, but any hopes for a full reset were misplaced: Gonzalez clubbed a two-run homer to make it 10-0.

The Rockies resumed the big beat-down in the third with the aid of consecutive one-out singles by Barmes, Sullivan, and Helton. Holliday broke the pattern with a three-run homer that traveled an estimated 442 feet to reach the left-field concourse and make it 14-0. A precious opportunity to record an out was then wasted when first baseman Robert Fickmade a poor throw to Cassidy covering first that allowed Atkins to arrive safely. Gonzalez then doubled to bring home Atkins and it was now 15-0. Following this at-bat in the third, Gonzalez was already 3-for-3 with only a triple separating him from the cycle.

Damian Jackson had the distinction of being the lone Padre to cross home plate that night. He scored in the fifth inning on Fick’s single to close the gap to 15-1. The Rockies did not resume their scoring until the seventh inning, when relief pitcher Marcos Carvajal delivered a two-run single to make it 17-1. Hopefully, someone thought to save the ball, because this single proved to be the only hit of Carvajal’s major-league career.

In the interest of providing a balance of pitching and comedic relief, Bochy allowed third baseman Sean Burroughs to pitch the bottom of the eighth inning. Burroughs was not entirely unfamiliar with the task; he had excelled on the mound for his Long Beach, California, Little League team that captured Little League World Series titles in 1992 and 1993.1

Apparently unimpressed by Burroughs’ Little League résumé, Choo Freeman greeted Burroughs with a single and Ryan Shealy did the same. Matt Holliday then drove a 3-and-1 pitch into the stands for a three-run homer. JD Closser’s deep drive to center field was caught by Ben Johnson for the final out of the inning but the Rockies now held a 20-1 lead. The Burroughs pitching experiment ended with that loud out; he never returned to the mound in a major-league game, which was not particularly surprising given that his best fastball reached only 77 miles per hour.

David Cortes closed the door on the Padres in the ninth inning and the 20-1 pasting remained as of 2019 the largest margin of victory in Rockies history. Troy Renck of the Denver Post summed it all up by commenting that “this game was to Padres pitchers what ‘Jaws’ was to swimmers.”2

The game generated some notable statistical outcomes. Matt Holliday was 4-for-5, including two home runs and a double, and drove in eight runs. Luis Gonzalez was 4-for-6 with four RBIs. The Rockies as a team had 23 hits in just 48 official at-bats. On the pitching side, Woody Williams deserves some special mention in the lore that surrounds the pitching graveyard known as Coors Field. Although he had an exemplary career in which he won 132 games in 15 major-league seasons, only one of Williams’s victories occurred at Coors, where he allowed more home runs (16) than strikeouts (13) in eight career appearances. His lifetime ERA at the Blake Street ballpark was a lofty 13.89. Remarkably, Rockies hitters batted .430 against him with an .821 slugging average when he had the misfortune of pitching at Coors.

The Padres went on to win the National League West Division by five games over the Arizona Diamondbacks but their 82-80 record set a new standard as the lowest-ever winning percentage for a division winner or postseason qualifier. Their season came to a rapid close as they were swept in three games by the Cardinals in the National League Division Series. The Rockies finished 67-95, which equaled their record from the 1993 expansion season as their worst seasonal mark. But for one evening, at least, all was well for the Rockies.

1 Paul McLeod, “Long Beach: The Road to the Little League World Series. Babe Among Boys: Slugger Sean Burroughs Is a World Series Attraction on the Field and Off,” Los Angeles Times, August 26, 1993.