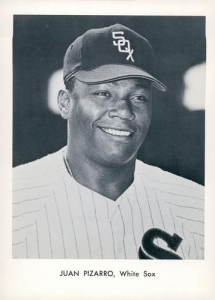 Only 825 spectators, the smallest crowd of the season at Comiskey Park, had turned out the night before to see the White Sox score two runs in the eighth and beat Boston, 6-4, but tonight would be different. Tonight the New York Yankees were in town.

The Yankees of 1962 were not the fence-busting juggernaut of 1961 – Roger Maris would launch little more than half the home runs he’d hit while breaking Babe Ruth’s record, and Mickey Mantle would miss 39 games with injuries1 – but they were still the biggest gate attraction in baseball and sitting atop the standings on their way to their 12th AL pennant in 14 seasons. At best, the fourth-place White Sox were hoping to overtake the surprising Los Angeles Angels for the consolation of finishing third. A crowd of 32,711 clicked through the turnstiles at Comiskey Park to watch the Yankees’ left-handed ace, Whitey Ford, with a 16-8 won-lost record, take on the White Sox and left-hander Juan Pizarro (12-13).

The weather was cool and damp as the game got underway beneath the lights. Both pitchers were sharp from the start, but a faltering Yankees defense handed Chicago the game’s first run when third baseman Clete Boyer booted a grounder,2 allowing Al Smith to reach first, and Maris let a single by Mike Hershberger go through his legs in right field for a two-base error. Maris subsequently left the game with a strained muscle in his right shoulder3 and was replaced by Hector Lopez.

Pizarro, meanwhile, retired the first eight Yankees and didn’t surrender a base hit until the fourth inning, when Tom Tresh stroked a one-out single to center field. Tresh, on his way to winning AL Rookie of the Year honors, had begun the season as a fill-in while shortstop Tony Kubek was away on military duty and wound up making the All-Star team. Shifted to left field when Kubek returned in August, the switch-hitting Tresh had helped the defending World Series champions remain on top.

Pizarro sent Mantle sprawling with an inside pitch that catcher Cam Carreon thought nicked the batter,4 allowing Tresh to scramble all the way to third on what was ruled a wild pitch. Mantle dusted himself off to bounce a single up the middle, sending Tresh home with the Yankees’ first run.

With Lopez at bat, Mantle broke for second, but Carreon fired a bullet to second baseman Nellie Fox, and Mantle beat a hasty retreat. Fox’s peg to Joe Cunningham at first plunked the slugger on the back of the head as he dived safely back to the bag.5 Mantle, still wearing his batting helmet,6 was dazed but not seriously hurt, and after a quick inspection by Yankees first base coach Wally Moses,7 remained in the game. (Fox, entering the game with 64 straight games without an error, extended his streak to 71 before fumbling in the final game of the season to fall short of Bobby Doerr’s then-AL record of 73.8)

Lopez struck out, Yankees catcher Elston Howard walked, and first baseman Moose Skowron tapped a slow roller past Smith at third for a base hit, scoring Mantle. Howard scored when Boyer lofted a fly to shallow center field that popped out of the glove of a sprinting Jim Landis. Ford flied out to right to end the inning with the score 3-1 Yankees.

The White Sox got back-to-back singles by Landis and Hershberger in the bottom of the fourth, but Ford coaxed fly outs from Fox and Carreon to halt any further threat.

Phil Linz, starting in place of Kubek, on the bench with a virus,9 singled to open the fifth for New York, then was caught stealing. Tresh bunted to third for a base hit before Pizarro, too, put the Yankees away with no damage done.

Lopez walked to start the sixth, and the skies opened. When play resumed after a 63-minute delay, Skowron deposited a fastball by Pizarro in the left-field deck for his 22nd home run, increasing the Yankees’ lead to 5-1.

Ford pitched to two batters in the bottom of the sixth but couldn’t get his arm loose after the lengthy delay, and Yankees manager Ralph Houk brought in left-hander Bud Daley, who retired the White Sox.

Pizarro pitched a perfect seventh but was lifted by manager Al Lopez for a pinch-hitter in the bottom of the inning, and John Buzhardt assumed pitching duties for Chicago in the eighth.

Neither team scored in the eighth inning.

In the top of the ninth, Linz singled to center field, stole second, and scored on Tresh’s ground-rule double, his third hit of the game, scoring Linz. Mantle drew a walk, and Jack Reed, nicknamed “Mantle’s Legs,” went in to run for him. Lopez grounded to third, but Smith’s throw was wild, loading the bases. Buzhardt induced Howard to end the inning with a fly ball to Landis.

Trailing 6-1 going into the bottom of the ninth, the White Sox “quit playing dead.”10 Fox led off with a single past Linz at short. Carreon followed with a single to left, and Bob Roselli, a utility catcher who’d gotten in only 65 games in five seasons with the Braves and White Sox and was hitting a scant .180, was sent to the plate to bat for Buzhardt. Roselli lined a double to right-center, scoring Fox, but the White Sox, playing cautiously, held Carreon up at third.11 Ken Berry went in to run for Roselli. Houk brought in another left-hander, Marshall Bridges, who walked Luis Aparicio to load the bases. Cunningham then stroked a double to left, clearing the bases and lifting the surging White Sox to within one run of the Yankees.

After Bridges walked left fielder Floyd Robinson, Houk again went to his bullpen, bringing in right-hander Jim Coates to face the right-handed Al Smith. Smith tried twice to bunt, fouling both to boos from the pumped-up crowd,12 before lining a double inside the left-field line, scoring Cunningham. The game stood tied, 6-6, with runners on second and third for Chicago.

Grover “Deacon” Jones had been sent to the on-deck circle to hit for Landis, but was called back,13 and Landis stepped to the plate to accept an intentional walk. Jones then returned to bat for Hershberger. Added to the roster on September 8 after hitting .319 with 26 home runs for Class A Savannah, Jones was nonetheless no raw recruit; at 28, he’d played in the minors since 1955 and set a Midwest League record in 1956 by hitting .409 at Dubuque. Over a drawn-in Yankee outfield,14 Jones drove a pitch to deep left-center, and Robinson jogged home with the winning run.

The stunning comeback gave Buzhardt, “who apparently leads a charmed life against these Yankees,”15 his third victory in as many games against New York, and improved his won-lost record to 8-12; Bridges (8-4), who faced three batters in the ninth and failed to get any out, was the loser. Despite winning for the 10th time in their last 12 games, the White Sox stumbled in the final week of the season to finish in fifth place.

“Did you ever see an inning like that?” a reporter asked Houk after the game. “No,” the manager said, “and I never hope to see another one like it.”16

1 Despite playing in only 123 games, Mantle was still voted the American League MVP.