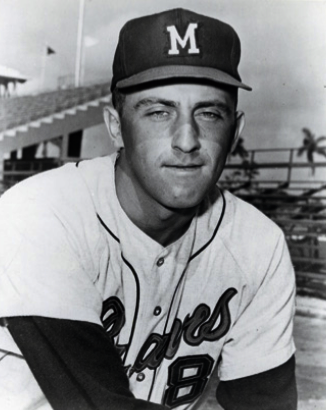 If the impending departure of the Milwaukee Braves was considered “big news” in their hometown on the morning of September 22, 1965, one might not have known it from reviewing the local newspapers. Both the Milwaukee Journal and Milwaukee Sentinel focused on the previous day’s visit of Lady Bird Johnson and her dedication of the new “astro-domes” at the horticultural conservatory at Mitchell Park as well as attempts to extend the United Nations ceasefire deadline in the war between India and Pakistan. In fact, the attendance for the previous night’s game at County Stadium may have also suggested indifference. Only 5,169 showed up to see Dodgers ace Don Drysdale pitch a six-hitter as Los Angeles downed Milwaukee, 3-1.

Perhaps the apparent lack of attention reflected accurately the lame-duck 1965 Milwaukee Braves’ season limping to its conclusion. They were in first place as recently as August 20 before slumping during September. Sentinel columnist Lloyd Larson may have summarized the situation when he wrote in that morning’s paper, “The joyous spirit of ’53 is missing completely. Instead the gloom is thick because of the creepy feeling that this could be the end.”1 There remained, however, one final Braves game on the County Stadium schedule.2

The pitching matchup featured Wade Blasingame against Sandy Koufax. The 21-year-old Blasingame provided the Braves with a reliable arm in their rotation, and he would finish the season second among Braves starters in several categories. Koufax was at the height of his powers. His season would end with the NL Cy Young award, reflecting his dominance as he led the league in wins, innings pitched, strikeouts, ERA, and complete games.

The Dodgers struck immediately. Maury Wills opened the game with a single, stole second base, went to third on Jim Gilliam’s single, and scored on Willie Davis’s groundout. Despite Wills setting an aggressive tone, two more groundouts ended the inning, and the Braves trailed 1-0 before their first at-bat.

The Braves went down in order against Koufax in the first, but made the most of having the heart of the order batting in the second. Joe Torre, Gene Oliver, and Eddie Mathews singled in succession to load the bases for Frank Bolling. The Braves second baseman won the showdown in dramatic fashion, sending Koufax’s pitch over the left-field wall. It was the only grand slam of the 33-year-old Bolling’s major-league career.3 Trailing 4-1, Koufax retired the next three Braves.

After Blasingame worked a three-up, three-down inning in the Dodgers’ third, Mack Jones led off the Braves’ third with his 29th home run of the season. When Henry Aaron followed with a single, Koufax’s night was finished. Dodgers manager Walter Alston summoned Howie Reed to the mound. Reed faced Torre with Aaron on first, and the Braves catcher hit a grounder to Wills, who started a 6-4-3 double play. With the bases clear, Oliver gave the ball a ride to deep center field, where it caromed off the railing. While the ball did not leave the yard, Oliver chugged around the bases and his inside-the-park home run extended the Braves’ lead to 6-1.4

The Dodgers chipped away at the Braves’ lead in the top of the fourth. Blasingame, who was not feeling well, started to weaken, and the Dodgers took advantage.5 With one out, reserve outfielder Al Ferrara, playing right field in place of regular Ron Fairly, singled to left field. Jim Lefebvre, the eventual NL Rookie of the Year, followed with his 12th home run, over the left-field fence, cutting the Braves’ lead to 6-3. Wes Parker and Jeff Torborg grounded out to end the Dodgers’ fourth.

Blasingame contributed to the offense with a one-out double in the bottom of the fourth, but the Braves could not bring him home. The Braves starter would not make it out of the fifth. With Reed’s spot in the order leading off the inning, Alston opted for Dick Tracewski to pinch-hit. Tracewski walked, but was forced out at second by Wills’ grounder back to Blasingame. Wills stole second ahead of Blasingame’s walk to Gilliam. With two on and one out, Davis singled to right, scoring Wills and advancing Gilliam to third. After Davis stole second, former Brave Lou Johnson’s weak tapper back to Blasingame proved to be a productive out when Gilliam scored. Ferrara walked, and Lefebvre singled to left field, driving in Davis and tying the game, 6-6. Seven batters into an inning in which a three-run lead evaporated, Braves manager Bobby Bragan emerged from the dugout to pull Blasingame. The fans booed Bragan, as they had all season.6 Reliever Billy O’Dell induced Parker to fly out to Aaron to end the inning.

Ron Perranoski took over pitching duties for the Dodgers in the bottom of the fifth, beginning what would become a six-inning relief appearance. Perranoski would scatter three hits and four walks, but the Braves did not cross home plate. O’Dell performed promisingly, but hurt his pitching elbow batting in the sixth.7 When his first two pitches sailed wide in the seventh, O’Dell’s injury became apparent and Dan Osinski took over. Gilliam singled, and Davis advanced him to second on a bunt. The Braves intentionally walked Lou Johnson, prompting Alston to replace Ferrara with Fairly. Fairly popped out to shortstop Woody Woodward and Lefebvre popped out to Oliver in foul territory, ending the Dodgers seventh.

Throughout the game, the small crowd of 12,577 gradually rekindled the spirit of the glory days. “As the innings progressed, the cheers for the Braves grew until there was a standing ovation for Eddie Mathews when he came to bat in the eighth,” one sportswriter noted.8 The demonstration for Mathews, the last original Milwaukee Brave, lasted three minutes.9 Aaron and Torre received similar ovations during later plate appearances. Afterward, Mathews commented, “It really shook me.”10 Referring his ovation, Aaron said, “That tribute was the greatest thrill of my baseball career.”11

In the eighth and ninth, neither team could advance a runner past first base. The game, now a 6-6 stalemate, headed to extra innings in a reprise of the inaugural Braves game at County Stadium in 1953.12 In the Dodgers’ 10th, Braves reliever Phil Niekro allowed only a one-out single to Lefebvre. Oliver led off the Braves’ 10th by walking. Mathews, who received another standing ovation, bunted Oliver to second with his first sacrifice of the season.13 Perranoski intentionally walked Bolling to set up a force play; instead, Sandy Alomar, now in at shortstop, and pinch-hitter Denis Menke flied out and lined out, respectively, to Fairly in right field to end the inning.

Don Drysdale led off the 11th pinch-hitting for Perranoski against a new Braves pitcher, Chi-Chi Olivo. He grounded out to Alomar, but Wills beat out a bunt to give the Dodgers a baserunner. After Wills’s third steal of the game put him in scoring position, Olivo intentionally walked Gilliam. Bragan then brought in Dick Kelley to replace Olivo. Kelley recorded the second out when Davis flied out to left fielder Billy Cowan. Johnson singled in the next at-bat, scoring Wills and giving the Dodgers the lead, 7-6. Fairly popped out to third for the final out of the inning. Down by a run, the Braves would bat against a new pitcher, Bob Miller. Leading off, pinch-hitter Jesse Gonder grounded out to Wills. Jones singled, and the winning run came to the plate in the form of Henry Aaron. Any hope kindled by seeing Aaron come to the plate with the game on the line was quickly extinguished when he lined out to center fielder Davis, who then fired to first base to double off Jones. Thirteen years of Milwaukee Braves baseball ended just like that. As the downcast fans filed out, the organist struck up “Auld Lang Syne.”

Whether baseball in Milwaukee was over stirred considerable discussion. In a Milwaukee Journal column, former Braves shortstop Johnny Logan may have captured some of the disbelief over the loss of the club: “[I]t’s unbelievable to me that Milwaukee is going to be without baseball. Milwaukee was the backbone of the National league, and it’s still big league.”14 There was discussion of Milwaukee County’s litigation against the Braves, the possibility of the Athletics relocating from Kansas City, and of a group of seven businessmen, including future Brewers owner and baseball commissioner Bud Selig, acquiring another club to replace the Braves.15 The Sporting News opined that “Milwaukee should be No. 1 on the expansion list, and expansion should be No. 1 on the majors’ winter agenda.”16 For now, all signs pointed to an empty County Stadium in 1966.

4 Oliver’s home run was his 19th of the season. Red Thisted noted in the Sentinel the next day that another by Oliver would allow the Braves to set the NL record with six or more players hitting 20 home runs in a season. Oliver finished the year with 21, securing the record for the Braves.