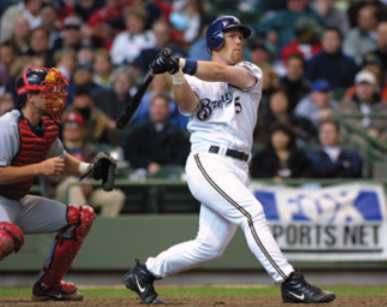 Every kid dreams of hitting the game-winning grand slam with two out in the bottom of the ninth.  It is highly doubtful that the young Geoff Jenkins ever fantasized about hitting the bases loaded game-winning fly ball that was dropped by the left fielder. But if he did, that fantasy came true on September 23, 1998.

Before its legacy was sullied by baseball’s steroid scandal, the 1998 season was magical for major-league baseball as Mark McGwire of the St. Louis Cardinals and Sammy Sosa of the Chicago Cubs waged an epic battle in which they both broke Roger Maris’s single-season home run record of 61.

Going into the day’s games, McGwire led Sosa 65 to 63 in the home-run derby, but Sosa had a not-so-secret weapon in 1998 that he wouldn’t have had in 1997 – the Brewers. After 29 seasons in the American League (including 1969, when the franchise was in Seattle as the Pilots), the Brewers had moved over to the National League as part of a divisional realignment that took place when Major League Baseball added two expansion teams, the Arizona Diamondbacks in the NL and the Tampa Bay Devil Rays in the AL.  To this point in 1998, Sosa had welcomed the Brew Crew into the league by hitting 10 home runs against them in 10 games. The National League record for home runs against one team was 13, shared by Joe Adcock, who hit 13 against the Brooklyn Dodgers in 1956, and Hank Sauer for the Cubs against the Pirates in 1954. Of course, teams played each other 22 times per season in those days.

The game was also important to the Cubs because they were in a three-way fight for the National League wild-card playoff spot with the New York Mets and the San Francisco Giants. Chicago and New York were tied, each with 88-70 records, while the Giants were 2½ games back with an 85-72 mark. The Brewers, at 72-85, were out of the postseason picture in a season that had begun with much higher expectations.

“There’s a thin line between optimism and delusion, and the Brewers are treading it like the Flying Wallendas,” wrote Dale Hofmann in the Milwaukee Journal Sentinel. “Maybe it’s because they saw their gate climb from 1.4 million in 1997 to 1.8 million this year while weathering the most disappointing campaign since McGovern ran for President.”1

Steve Trachsel started for the Cubs. Trachsel was having a fine season at 14-8, but was coming off a poor start against the Reds in which he gave up four earned runs in 3⅔ innings. He wasn’t involved in the decision, but the outing increased his ERA to 4.56. Raphael Roque, a rookie, started for the Brewers. He had a 4-2 record and, like Trachsel, had been smacked around in his previous start. He gave up four runs, three earned, in four innings in a 5-2 loss to St. Louis. He also had a 4.36 ERA.

Roque gave the Cubs two runs in the second without yielding a hit – not that the league’s third-ranked team in runs scored (831) needed the help. Gary Gaetti led off the inning with a walk, and was forced at second on a fielder’s choice by Mickey Morandini. Morandini moved to second on a groundout by Scott Servais. Roque then proved he had a lot of balls – 12 of them, in fact – as he walked Trachsel, Lance Johnson, and Jose Hernandez to bring Morandini home with the first run of the game. If walking Trachsel with two out wasn’t enough to earn Roque a trip into manager Phil Garner’s doghouse, he confirmed his reservation when he committed a balk to bring Trachsel home with Chicago’s second run. Roque struck out Mark Grace to end the inning. The Cubs led 2-0 after two.

Sosa, who was in the midst of a five-game hitless slump, led off the third inning with his second walk of the game (the sixth given up by Roque). After Glenallen Hill popped out, Gaetti singled down the left-field line. Left fielder Geoff Jenkins misplayed the ball for an error, allowing Sosa to score from first. The Cubs led 3-0 after three.

Roque continued to be his own worst enemy in the fifth. Sosa batted with one out and this time he got around the bases on his own power as he slammed number 64 down the right-field line. Hill, the next batter, struck out on a wild pitch and made it aboard when the ball skipped away from Servais for a wild pitch. If Robin from the Batman TV show was at the game, he would have gone, “Holy Mickey Owen,” because the Cubs took advantage of a wild pitch to  score two more runs.2

Gaetti reached first on a fielder’s choice that eliminated Hill at second. Morandini followed with a single that moved Gaetti to third and moved Roque from the mound to the showers as Garner had finally seen enough. What followed next didn’t thrill the Brewers’ skipper, either, as new pitcher Alberto Reyes gave up consecutive base hits to Servais and Trachsel, each of which drove in a run. (Trachsel had a day at the plate that Ted Williams would envy, 1-for-3 with a walk, a run scored, and an RBI) before he finally recorded the third out. After five it was 6-0 Cubs.

The Cubs didn’t score again until the sixth. Rod Henderson was on the mound for the Brewers and he added his name to the list of Sosa’s victims for the season when he gave up another solo shot that made the score 7-0. The Brewers had the Cubs right where they wanted them.

Trachsel was still on the mound as the fans got back into their seats after the seventh-inning stretch, but he was out of gas. He got into trouble quickly, giving up singles to Jeromy Burnitz and Marquis Grissom, and then walking Jenkins to load the bases with nobody out. He couldn’t pitch himself out of the fine mess he got himself into, giving up a double to Jose Valentin that brought Burnitz and Grissom home and moved Jenkins to third. Bobby Hughes drove Jenkins home with a sacrifice fly. Pinch-hitter Brian Banks joined the singles club, which made Valentin’s day because it brought him home with Milwaukee’s fourth run of the inning. That hit sent Trachsel to the showers.

The Brewers inched closer in the eighth when they scored a run with Matt Karchner on the hill for Chicago. Karchner took a page out of Roque’s book by getting himself into trouble; he walked Burnitz to lead off the inning and then, after inducing a fly ball from Grissom, he hit Jenkins with a pitch, which moved Burnitz to second. Burnitz reached third when Valentin was safe on a fielder’s choice, and scored on the only hit of the inning, a single by Bob Hamelin, who was pinch-hitting for Hughes. Things were getting a bit dicey now for Chicago; their lead was down to 7-5.

The Cubs were a confident bunch going into the bottom of the ninth with their closer Rod Beck on the mound. But with one out Mark Loretta singled and Jeff Cirillo doubled, putting runners at second and third. The Cubs then broke a cardinal rule – they walked Burnitz intentionally to put the winning run on base. They seemed to dodge the bullet when Grissom fouled out and Jenkins hit a fly ball to left fielder Brant Brown, who had replaced Hill for defensive purposes in the eighth. Then came the unthinkable; the ball dropped out of Brown’s glove. Since the baserunners were off on contact, they all scored, giving Milwaukee an unlikely 8-7 victory that the Cubs could hardly afford to lose.

The unlikely victory only helped the Brewers’ pride. The Cubs still managed to make the playoffs in spite of the loss, but were swept in three games by the Atlanta Braves in the NLDS. And without the Brewers to beat up on any further, Sosa ended up losing the home run title to McGwire, 70 to 66.

2 Owen dropped what would have been the last pitch of Game Four of the 1941 World Series. The Brooklyn Dodgers were ahead 4-3 with two out in the ninth and the Yankees’ Tommy Henrich the batter. When Owen misplayed the ball, Henrich ran safely to first. New York scored four more runs and what would have been a Series-tying victory for Brooklyn instead put the Bronx Bombers up three games to one. They won the Series the next day.