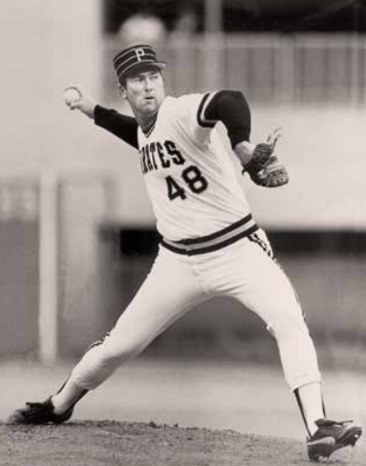 In late February 1985, Pittsburgh Pirates general manager Pete Peterson signed veteran right-handed pitcher Rick Reuschel to a one-year deal with the Hawaii Islanders, Pittsburgh’s Triple-A affiliate in the Pacific Coast League. The contract provided Reuschel an opportunity to compete for a spot with the Pirates in spring training. In June 1982 he had been diagnosed with a partial rotator cuff tear.1 Reuschel missed the rest of 1982, pitched only 20⅔ innings in 1983, and then endured his worst professional season in 1984, compiling a 5-5 record and 5.17 ERA in 92⅓ innings with the Chicago Cubs. Upon Reuschel’s signing, Peterson commented, “We’ve made Rick no promises, but I would think that he could be a long-relief man.” Pittsburgh skipper Chuck Tanner offered more confidence: “We’ll give Rick a look. I know one thing. He knows how to pitch.”2

Spring training didn’t inspire hope among Pirates fans; the team finished with a league-worst 6-18 record. Tanner maintained his optimism throughout the exhibition season, commenting, “We all start out zero-zero. I think our overall pitching will keep us competitive, and there isn’t a team in our division capable of running away with it.”3 Sportswriters didn’t have high expectations for Tanner’s team; The Sporting News predicted a last-place finish: “What a shame – a disaster waiting for the vans to pull up to Three Rivers Stadium.”4 The Pittsburgh Press forecast a fifth-place finish, writing, “Last year, in August, with his team 20½ games out of first place, Chuck Tanner was plotting ways to win the pennant. It didn’t and it won’t this year, either.”5

Heading into their September 25 matchup against the Montreal Expos, the ’85 Pirates were suffering through their worst season since 1954, when they compiled a 53-101 record. They occupied the NL East basement with a 51-98 record, 43 games behind the division-leading St. Louis Cardinals and 18½ games behind the fifth-place Chicago Cubs. Their struggles were more offensive than pitching; they scored fewer runs than any other major-league team, while their pitching was below average but not the majors’ worst.

The Expos had experienced some midseason success during mid-June when they briefly led the NL East, but they had been mired in third place since July 12 after an extra-inning loss to the Cincinnati Reds. The Expos struggled throughout September, starting the month with a five-game losing streak, then losing six straight from September 17 through 22. The latter streak included two extra-inning losses to Pittsburgh. By late September, the Expos had fallen from contention.

Rick Reuschel was one of the few bright stars in Pittsburgh as the season wound down. Although he had won 139 games through 1984 and passed through the November 1984 re-entry draft with no takers, Reuschel was willing to prove himself in the minor leagues for another job in the majors.6 Reuschel succeeded, winning six of eight decisions while spending the first six weeks of the season with the Triple-A Islanders. On May 21, GM Peterson called him up. That evening Reuschel pitched his first game in a Pirates uniform and defeated Houston, 3-2. In his major-league return, he allowed only one run on three hits over 7⅔ innings, retiring 15 of the first 16 batters he faced. Tanner commented, “Reuschel pitched like the old pro that he is.”7 In the two months from his season debut through July 20, the Pirates won only 18 games, and Reuschel won eight of them. He regained his expertise with the sinkerball; more than two-thirds of his outs were groundouts.8 Reuschel carried a 13-7 record with a 2.25 ERA over 175⅔ innings into that evening’s matchup against Montreal.

Conversely, Expos right-hander Bill Laskey was struggling to keep a major-league job. After he started at least 25 games in each of his past three seasons with the San Francisco Giants, the team traded him along with Scot Thompson to Montreal in exchange for Dan Driessen on August 1.9 Laskey hadn’t received much run support from the Giants all season; they scored only 14 runs in his 11 losses that season.10 He lost his first three decisions after joining Montreal, then was moved to the bullpen. However, Laskey had pitched well against Pittsburgh in his most recent outing, allowing two runs in six innings seven days earlier against the Bucs.

Pittsburgh’s smallest crowd at Three Rivers Stadium that season – 2,64811 – watched as Montreal leadoff hitter Tim Raines started the game with a fly out to left field and Mitch Webster followed with a fly out to right field. Andre Dawson singled for the game’s first base hit, but Hubie Brooks grounded out to short and ended the inning. In the bottom of the inning, Pittsburgh leadoff hitter Joe Orsulak singled. R.J. Reynolds flied out. With Johnny Ray hitting, Orsulak stole second. Ray walked. Sid Bream singled Orsulak home with the game’s first run and moved Ray to third base. Mike Brown walked to load the bases, but the Pirates missed an opportunity to score more runs when Tony Peña fouled out and Jim Morrison flied out to end the threat. Reuschel set down the Expos in order in the second inning on a popout, fly out, and groundout. The Pirates threatened again in the bottom of the inning with runners on first and third with two outs, but Ray flied out to center field for the third out. Reuschel delivered another three-up, three-down inning with two groundouts and a strikeout.

Bream started the third inning by grounding out to second base. Brown doubled, then Peña, Morrison, and Sam Khalifa followed with successive singles; both Brown and Peña crossed the plate during that stretch. Reuschel hit into a fielder’s choice, as Morrison was thrown out at home. With Khalifa on second and Reuschel on first, Orsulak plated Khalifa with a single. Reynolds followed with another single, scoring Reuschel and chasing Laskey. Southpaw Gary Lucas ended the inning, but the Pirates used six hits to score four runs and increase their lead to 5-0.

In the fourth inning, both pitchers set down their opponents in order, and each team left one runner on base in the fifth inning as both Reuschel and Lucas established their rhythm. In the sixth inning, Reuschel allowed a leadoff single to pinch-hitter Herm Winningham, who was forced out at second on a fielder’s choice as the Expos still couldn’t place two runners on base in the same inning after six frames. Montreal right-handed reliever Bert Roberge walked Reynolds, the first batter he faced, who stole second and third base. Reynolds scored on a mishandled sacrifice bunt; Peña doubled home Bream and Brown on the next plate appearance to increase Pittsburgh’s lead to eight runs.

The Expos finally scored in the seventh inning when Terry Francona singled and Tim Wallach walloped his 21st homer of the season. Reuschel did not allow another Montreal baserunner for the remainder of the game. Pittsburgh managed a lone walk in the seventh and eighth innings, but scored no more runs. Pittsburgh soundly defeated Montreal, 8-2, with Reuschel allowing five hits while striking out seven batters and walking none. His five-hitter was his eighth complete game over his past nine starts. Tanner complimented Reuschel’s tenacity: “The way Reuschel is pitching should be contagious to our young pitchers. They see him go out there and throw strikes and get the job done.”12

The Pirates ended the 1985 season with a 57-104 record, the worst winning percentage in the majors. Reuschel was a bright spot during a tough year; even though he pitched in Hawaii for the season’s first six weeks, he led the Pirates with 14 wins and finished second in games started (26), innings pitched (194), and strikeouts (138), while allowing only seven homers. After his difficult 1984 season, Reuschel was named The Sporting News’ Comeback Player of the Year for his 14-8 record and 2.27 ERA.13 He finished fourth in NL ERA, third with 6.2 Wins Above Replacement for NL pitchers, and second lowest with 0.325 home runs allowed per nine innings pitched. Reuschel’s comeback story was a breath of fresh air during the 1985 season, when many stories focused on relocation threats14 and drug-abuse accusations. Writing about Reuschel’s 14th victory, Pittsburgh sportswriter Bob Hertzel noted, “But there is something more esoteric about the accomplishment; a message that success can grow out of failure. It is what fans have latched onto, fans tired of reading about drugs and tests and in need of a hero.”15

O’Brien, Jim. We Had ’Em All the Way: Bob Prince and His Pittsburgh Pirates (Pittsburgh: Jim O’Brien Publishing, 1998).