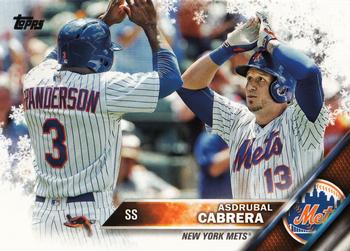 A crowd of 35,093 showed up at Citi Field on September 25, 2016, for the Mets’ final regular-season home game, against the Philadelphia Phillies. The crowd brought the Mets’ home attendance to 2,789,602, their second highest since their inaugural season at Citi Field in 2009.1

The Mets and the Phillies had scored 50 runs between them in the first three games of the series. The Mets had won the first two games before losing on the 24th, 10-8 The Mets were clinging to a half-game lead in the chase for the wild-card spot in the National League as they battled to return to the playoffs for the second consecutive year. They had accomplished this once before, in the 1999-2000 seasons.

“It really kind of sunk in today that it was the last regular-season home stand,” pitcher Noah Syndergaard said. “The clubhouse was like, we don’t want it to be the last game we play here this season.”2

The baseball world had learned that morning of the death of Miami Marlins pitcher Jose Fernandez in a boating accident. Fernandez had escaped from Cuba on a boat when he was a youngster, just like Mets outfielder, Yoenis Cespedes. At the suggestion of Mets Chief Operating Officer Jeff Wilpon, Cespedes taped a number-16 jersey with Fernandez’s name on the dugout wall. “That’s not something that I would ever recommend to any ballplayer in Cuba, to maybe leave the way that we did but those who have I very much admire,” Cespedes said.3

Robert Gsellman (2-2) took the mound for the Mets, who were wearing uniforms celebrating the 30th anniversary of their 1986 World Series victory. Gsellman had made his big-league debut on August 23 and this was just his sixth start. He had lost his previous outing and was hoping to turn in a solid performance as the season drew to a close. He faced Jake Thompson. Thompson entered the game with a 3-5 record and had won his previous two starts.

Gsellman managed to get out of the first inning without giving up a run after Freddy Galvis singled and reached second on a passed ball to Maikel Franco. After Gsellman walked Franco, Galvis stole third on a ball to Ryan Howard. But Gsellman kept his cook and got Howard to ground out to end the inning.

In the second inning the Mets scored. Jay Bruce doubled to left field. He moved to third on T.J. Rivera’s single, and came home when James Loney hit a double-play groundball to second baseman Cesar Hernandez, who was playing deep and had no play at home.

Gsellman continued to look strong. Through the fourth inning, he had six strikeouts. At the plate, he notched a milestone in the third when he got his first major-league hit. Gsellman, a right-hander, could not swing the bat because of a shoulder injury. He could only bunt. The Phillies surprisingly played the infield back in the third when he came to bat, which allowed him to tap the ball up the first-base line for a hit.4

Curtis Granderson added to the Mets’ lead when he hit his 30th home run of the season in the fourth. It was the first time he had hit 30 home runs since 2012, and the blast allowed him to join Bruce and Cespedes in the Mets’ 30-homer club for the season. It was Granderson’s 10th homer in his last 23 games.

Apparently rattled by the home run, Thompson walked T.J. Rivera. Then he gave up a single to Loney before walking Rene Rivera to load the bases. When he walked Jose Reyes to score T.J. Rivera, the Mets were up 3-0. Thompson got Asdrubel Cabrera to fly out for the third out; Cabrera was the last batter that he would face in the season.

Phil Klein did not stop the Mets when he took the mound in the fifth. By the time he was removed, he had walked two batters, gave up two singles (one an RBI hit by T.J. Rivera), and hit Rene Rivera with a pitch to drive in a run. Colton Murray, who replaced Klein, threw a wild pitch that scored another run before he got the third out. The Mets now led 6-0.

In the seventh the Mets struck again. Murray, still on the mound, started the inning by hitting T.J. Rivera. Loney grounded out, but Murray gave up a single to Rene Rivera and walked Brandon Nimmo to load the bases.

Phillies manager Pete Mackanin replaced Murray with Frank Herrmann, who did no better. He walked Reyes, the first batter he faced, forcing in a run. Then Cabrera, after working the count to 3-and-2, hit a grand slam, making the score 11-0.

Things got even worse in the eighth when the Mets scored six runs. Patrick Schuster had replaced Herrmann. He hit leadoff batter Gavin Cecchini. (That set a Mets record of four batters hit by a pitch in a game.) Schuster struck out T.J. Rivera and Loney, but then things fell apart for him. Rene Rivera singled and then Schuster walked Nimmo to load the bases before giving up a two-run double to Reyes and a two-run single to Eric Campbell. When Mackanin removed Schuster, the second-base umpire, Kerwin Danley, took off his black hat and waved it to the Phillies bullpen to announce the newest pitching change. He might as well have just waved a white flag.5

Luis Garcia was unable to stop the Mets. He walked the first batter he faced, then threw a wild pitch and gave up a double to Michael Conforto to score two more runs. By the time the inning ended, the Mets were up 17-0.

Gsellman succeeded in rebounding from his two losses by pitching seven scoreless innings. He struck out eight batters, a career-best, and gave up just three hits. “It felt great to finally get past the sixth inning and go seven. And to help out the team. The bullpen had been pitching a lot,” he said.6 When he left after the seventh inning, the fans gave him a standing ovation.7

The Phillies went down easily in the ninth, and the Mets had their highest-scoring game at Citi Field. New York’s previous high for runs in a shutout was 14, against the Chicago Cubs in 1965 and Cincinnati in 1998. It was the worst loss by a Phillies team since they fell to Cincinnati, 22-3, on September 4, 1999. All five of the Phillies relievers – Klein, Murray, Herrmann, Schuster, and Garcia – yielded runs. All but one of the Mets’ starting position players scored a run.

“We needed one of those,” Mets manager Terry Collins said. “Our bullpen was shot.”8 As the Mets put the finishing touches on the lopsided win, Citi Field fans started chanting, “We want playoffs,” hoping to see the Mets make a return to the playoffs.9

9 “Mets’ Shutout Victory Most Lopsided Blowout.” The Mets grabbed a wild-card spot, but were shut out by the San Francisco Giants’ Madison Bumgarner in the one-game wild-card play-in.