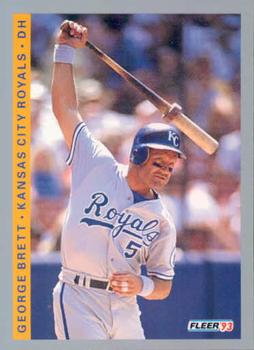 Lynn Nolan Ryan Jr. played 27 seasons for the New York Mets, California Angels, Houston Astros, and Texas Rangers. As one of the greatest pitchers the game has seen, the “Ryan Express” amassed 324 wins over the course of his storybook career, as well as countless records. Some lifetime benchmarks include 5,714 strikeouts, seven no-hitters, leading the league in strikeouts 11 times and fanning 300 batters in a season six times, including a record 383 in 1973.

Carlton “Pudge” Fisk played 24 seasons for the Boston Red Sox and Chicago White Sox. He caught more games (2,226) and hit more home runs (376) than any catcher before him. Fisk was the 1972 AL Rookie of the Year and was an 11-time All-Star. Most notably, true baseball fans remember Fisk’s dramatic home run to win Game Six of the 1975 World Series, one of baseball’s most unforgettable moments.

On Saturday, September 25, 1993, George Brett held a press conference to announce his retirement as a player. He was flanked on one side by his wife of two years, Leslie, and his 6-month-old son, named Jackson after his late father, and on the other side by Muriel Kauffman, widow of Ewing Kauffman, the founder of the Royals, and general manager Herk Robinson.1 Brett’s heart told him it was time to hang up number 5 for the last time. The Royals star always said he played for the fun of the game, not the money. “The game became a job,” Brett said. “It wasn’t a game anymore. And baseball shouldn’t be treated that way. I wasn’t getting that excited when I did something good, wasn’t getting that down when I did something bad. I wasn’t that happy when we won; I wasn’t that sad when we lost. There was something missing.”2

Even though there might not have been fireworks the day Brett announced his retirement, the next day proved different.

On Sunday, September 26, 1993, in front of 19,391 at Kauffman Stadium, the Royals (80-76) faced off against the California Angels (69-86). The Angels were managed by Buck Rodgers and Hal McRae was the skipper of the Royals. The game saw a starting pitchers were John Farrell of the Angels and Chris Haney of the Royals. Farrell came into the game with a record of 3-11 after four days’ rest and Haney had a 9-9 record after resting for nine days.

After that quick one-two-three, the Royals’ Kevin Koslofski led off the bottom of the inning with a fly ball to center. Félix José walked and stole second base. Brett doubled to center, scoring José. Chris Gwynn walked, but Gary Gaetti and Bob Hamelin, struck out and lined out, respectively, to end the inning. The Royals were ahead 1-0 and Farrell had racked up a pitch count of 34.

The Angels returned the favor in the top of the second. After two quick outs (Chili Davis struck out swinging and Eduardo Perez grounded to short), Chris Turner singled to center and Stan Javier doubled down the left-field line to score Turner. Haney threw a wild pitch to Torey Lovullo, moving Javier to third. He scored when Lovullo hit a single to center. The Angels finished the inning ahead 2-1 after Rod Correia grounded out to third.

Both pitchers settled in and neither team scored again until the top of the fourth when Javier hit a two-out solo home run off Haney, making the score 3-1.

The Royals rallied in the bottom of the inning. After back-to-back singles by Brent Mayne and Jose Lind, Koslofski walked, loading the bases. Mayne scored on a sacrifice fly by José.  Brett was up again. On the second pitch of his at-bat, Brett hit a line-drive home run to deep right-center field. Farrell was relieved by Ken Patterson, who retired the side with the Royals up, 5-3.

In the top of the fifth, the Angels tied the game at 5-5 on singles by Perez and Turner. McRae replaced Haney with John Habyan.

The Angels struck again in the top of the sixth. After doubles by Lovullo and Polonia, Habyan was replaced by Stan Belinda. This didn’t stop the bleeding: Singles by Davis scored Polonia and Gonzales, giving the Angels an 8-5 lead, which still stood going into the bottom of the ninth.

The Angels’ Steve Frey started the half inning by striking out Keith Miller and hitting Brett with a pitch. Hubie Brooks, pinch-hitting for Gwynn, flied to center. Frey walked Gaetti. Joe Grahe relieved Frey but things didn’t get much better as he walked two straight batters, forcing Brett home. With the bases loaded, Mike Macfarlane tied the game with a single to center, scoring Gaetti and Phil Hiatt. With a chance at a walk-off, Terry Shumpert lined to second and the game headed to extra innings tied 8-8.

Jeff Montgomery relieved for the Royals in the 10th and got Curtis to fly out to center, J.T. Snow to ground out to second, and Davis to strike out swinging, all on 10 pitches.

The Angels’ Paul Swingle relieved Grahe in the bottom of the 10th. After Brian McRae struck out swinging and Miller popped out to short, Brett stepped to the plate for the fifth time. Again on the second pitch, he hit his second home run of the night, into the Royals bullpen in right field. Brett took a little hop and pumped his arms as he rounded second. Bullpen coach Bruce Kison retrieved the ball for him. “I haven’t been in that situation in a long, long time,” Brett said. “If it’s the last home run I ever hit, I’ll have it inscribed in my trophy case.”3

Brett ended his career the same season as Nolan Ryan, and his retirement was all but overshadowed by Ryan’s as many news outlets, including The Sporting News, ran articles about Ryan at the end of the season. Brett was Kansas City Royalty and was one of the most productive hitters ever.4

In addition to the sources cited in the Notes, the author consulted Baseball-almanac.com, Baseball-reference.com, and the National Baseball Hall of Fame site at baseballhall.org/hall-of-famers.