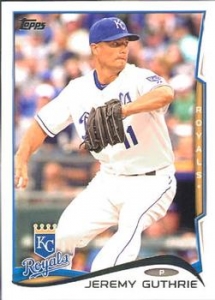 And if you reduce that number to the major-league baseball seasons involved … 29 seasons is still a very long time.

But September 26, 2014, had seen that much time pass since the Kansas City Royals had been a postseason team. It was long enough that four of the 10 players who started for the Royals against Chicago that evening were not even alive when the K.C. crew ended the 1985 World Series.

Gathering at U.S. Cellular Field that afternoon, the young team could bring all that history to an end. It was possible to start a chapter of postseason baseball under the Royals name. And K.C. fans were ready.

In May of 2010, Dayton Moore, the Royals GM since mid-2006, stated in an interview his ideas about what he coined “the Process.”1 He uncharacteristically revealed what he thought a timetable for the Royals resurgence might be:

“Our goal by 2013, 2014 is to have the majority of our 25-man roster be homegrown players. That’s what we’re shooting for, that’s been the long-term plan all along. … Look what Colorado did, look what Minnesota did, look what the New York Yankees did. … I’m not talking about getting to .500, I’m talking about winning the World Series when I say eight to 10 years.”2

So, depending on whether Moore’s 8- to 10-year window began with his hiring or the timing of the quotation, the Royals team playing that evening was either a few years early or right on time. Myriad Royals fans felt that a place in the postseason could not come soon enough.

The ballclub was certainly aware of its history and the fan base angst. It had been the subject of radio call-in shows and blog posts since before spring training.3 Just the day before the September 26 game, a popular Royals blog site stated how many fans were approaching the possibility that the long wait might be over:

“It’s really hard —as a Royals fan —to believe something good is going to happen. If there’s still a faint trace of a fraction of a chance that a pro sports team could defy 99.6 percent odds, it’d have to be the Royals. They do, of course, have the longest playoff drought in American sports after all … until tonight … maybe.”4

Such skepticism was understandable. September saw the Royals play yo-yo with the idea of a postseason berth. Five of their first six games in the month were victories, but those were followed by five losses in seven games. Worse, two of the defeats were to the Detroit Tigers, the team just ahead of them in the Central Division.

Even so, when beginning play at 7:10 that evening, the Royals had a “magic number” of one to secure a postseason berth for the 2014 season. The host White Sox were out of the picture, fighting with the Twins to avoid last place. But 27,416 was the announced attendance on a comfortable late-season night. Part of that crowd was a large contingent of Royals fans who traveled to Chicago hoping to see their squad make history.

Those fans did not have to wait long to be rewarded. On the game’s second pitch, Alcides Escobar lined a single off White Sox starter Hector Noesi. Two pitches later, Norichika Aoki blasted a triple to deep right field to score Escobar. Two pitches after that, Lorenzo Cain shot a single up the middle to bring in run number two. Eric Hosmer was a strikeout victim, but Cain stole second, his 28th stolen base of the year. Billy Butler, at age 28 a veteran of the team, worked a 3-and-2 count before hitting a single between shortstop and second base to allow Cain to tally the third run of the inning. The next two hitters made outs and the score after half an inning was 3-0 for the Royals.

Jeremy Guthrie, starting his most important regular-season game as a member of the Royals, began well. He gave up a bases-empty single to eventual AL Rookie of the Year Jose Abreu, and after that scattered three hits and one walk over seven innings pitched. The only time the White Sox managed multiple runners was in the fifth, but Guthrie stranded them at first and second. He never had a Chicago batter get as far as third.

For Royals fans the pitching was encouraging, but the lack of offense after the first inning had an unpleasant feel of déjà vu. In the second inning Mike Moustakas was on second and Escobar on first following a walk and a single with one out. They would stay there. Omar Infante’s fourth-inning single was erased by a double play after a successful replay challenge by White Sox manager Robin Ventura. In the seventh the Royals struck out in order, and they also went down in order in the eighth. The score remained as it had been since the top of the first inning.

Throughout the season the Royals were never an offensive juggernaut. They were ninth in runs scored in the AL. But they boasted solid, if not spectacular, starting pitching; excellent defense (three Gold Glove players5); and a sensational bullpen corps known as “H-D-H” (Kelvin Herrera, Wade Davis, Greg Holland).6 These were the ingredients of their history-challenging success, and they were potent on this night.

Wade Davis came in for the eighth inning (Herrera did not pitch). After Marcus Semien struck out to begin the inning, Adam Eaton laced a triple to deep center field. Alexei Ramirez singled to score Eaton, and the game became a 3-1 affair. There was one out and the slugger Abreu was up. It was here the Royals began to turn back time. Davis struck out Abreu and then Conor Gillaspie.

After the Royals failed to capitalize on a runner in scoring position in the ninth, manager Ned Yost gave two-time All-Star closer Greg Holland the chance to stop the clock on the team’s postseason absence. Eleven pitches later the final out was recorded and the clock on Kansas City’s playoff appearances was reset.

Naturally, bedlam ensued. The young ballclub began a raucous celebration that moved from the field to the locker room. The Royals would at least be a wild-card team. (They were one game behind the Tigers for the AL Central crown with two games to play.) They did become the wild-card club and would face the Oakland Athletics. But they were in.

The celebration moved back onto the field as the players wanted to show appreciation to the fans who had come to the game and, by proxy, all the fans who had stood by the Royals through 29 hard seasons. The players knew this was special to many people. Several of the players tossed their black and white playoff caps to cheering fans before finally walking off the field. Billy Butler remarked, “We’re in Chicago, and look at all the Royals fans.”7

10,561 days is a long time. Bringing that period to a close brought a surge of emotion throughout Kansas City and everyone connected to the Royals. George Brett, the Hall of Fame third baseman and greatest Royals player to date, shared that emotion. He said, “I got tired of the people criticizing the players on this team because they hadn’t won a World Series since 1985. Ninety-five percent of these … guys weren’t even born in ’85. It’s not their fault. These guys played their (butts) off all year.”8