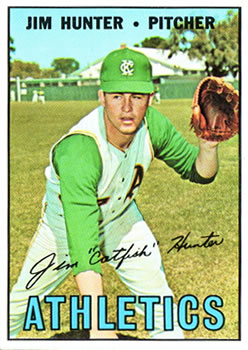 The Kansas City Athletics’ last home game, against the Chicago White Sox on Wednesday, September 27, 1967, at Municipal Stadium, was the nightcap of a twilight-night doubleheader brought about because the teams’ game the night before had been rained out. Catfish Hunter’s three-hit shutout gave the last-place Athletics a sweep of the twin bill after Kansas City won the first game, 5-2.

The White Sox, in the thick of the American League pennant race, found themselves a full game out of first place behind the Minnesota Twins after dropping the first game of the doubleheader. In this must-win second game, with only four games left in the regular season, the White Sox sent their ace, Joe Horlen (19-6), to the mound. The 21-year-old Jim “Catfish” Hunter (12-16), was in the third year of a Hall of Fame career, was the Athletics’ starter. Hunter, like Chuck Dobson, the first-game starter, had some extra incentive to beat the White Sox because of comments made by White Sox manager Eddie Stanky. “Stanky said to me at the All-Star Game in Anaheim that he was on my side for the first and last time,” said Hunter.1

Among the small crowd of 5,325, at least one person had seen the Athletics’ first game in Kansas City 12 years before. “Jack Layton, the A’s public-address announcer the last five years, recalled before the second game started how he, as a fan, attended the first game played by the A’s here, April 12, 1955, when Kansas City defeated Detroit, 6-2. ‘I saw their very first game,’ Layton said, ‘and I guess I am going to see the last.’”2

The first two innings came and went without either team having a baserunner. The closest either team came was when White Sox second baseman Don Buford threw out Ramon Webster of the Athletics on a fine play on Webster’s grounder in the second inning.3 The first player to reach base for either team was pitcher Hunter, who singled with two outs in the third inning. The White Sox’ first baserunner was Ken Berry, who led off the fourth inning with a walk but was stranded there as Hunter retired the next three White Sox. Hunter did more than just pitch with efficiency in the fourth. According to the Kansas City Times, “A dog held up play for a while in the fourth inning, but Catfish Hunter tricked it into coming to him and it was taken off the field.”4

Webster doubled with two outs in the bottom of the fourth, but Horlen got Rick Monday to fly out to Tommie Agee in center field to end the inning. The White Sox’ first hit came in the fifth inning with two outs, a bouncing single to center field by Ron Hansen.5 But Duane Josephson flied out to Monday in center field for the third out.

In the top of the sixth inning, Buford singled with two outs. The hope of any rally was quickly snuffed out as Hunter got Agee to ground out to third baseman Sal Bando to end the inning.

The Athletics scored all their runs in a raucous bottom of the sixth. Hunter, after being brushed back by a high pitch from Horlen, led off the inning with a single to right field.6 Ken Boyer moved in to play for a possible bunt by Ted Kubiak, but instead Kubiak lined a single past Boyer, moving Hunter to second. John Donaldson followed with a bouncer that sailed past first baseman Tommy McCraw for a single.7 Ken Berry’s throw from right field got to catcher Josephson ahead of Hunter, but when Hunter bulled over Josephson, the catcher dropped the ball and Hunter was safe with Athletics’ first run.8 Josephson had to leave the game and was replaced by J.C. Martin.

Hunter said after the game, “I started to slide and then I saw I didn’t have a chance to get by him, so I hit him in the head with my knee.”9 On the play, Kubiak went to third base and Donaldson to second. After Mike Hershberger grounded out, Webster singled to left-center and both runners scored. Webster’s hit ended Horlen’s night and he was relieved by left-hander Wilbur Wood. The first batter he faced, Monday, reached base when Buford booted his bouncer for an error. Jim Gosger then singled to right but Webster was thrown out at home by Berry for the second out, with Monday moving to third base and Gosger to second. Stanky brought in Bob Locker to replace Wood. Locker walked Sal Bando; ball four was a passed ball charged to Martin, allowing Monday to score. Phil Roof’s force-play grounder ended the inning.

The sixth inning was also enlivened by a fistfight that broke out in the grandstand behind third base. “It was bloody, glorious and seemed to go on forever,” the Kansas City Star reported. “Two men stood in the aisle, their arms waving. An usher hurried up, then left the two men glaring at each other, departing rather leisurely, under the circumstances, presumably for the police. One of the men swung, and knocked his opponent cold over the rail. Women stood on their seats craning their necks, and screamed. Men yelled, ‘Get up and hit him.’ Another man ran down the aisle, struck four solid blows at an indiscriminate section of targets, and fled before five policemen could work their way to the scene. In the middle of the fight the A’s scored their fourth and last run. Though it made little difference, few people on the third base side of the diamond saw the last score.”10

The White Sox missed a scoring opportunity in the seventh when with one out McCraw doubled off the right-field screen. Hunter retired the next two hitters on fly balls to end the threat. Locker retired the Athletics in order in the bottom of the seventh, and Hunter continued to cruise, setting the White Sox down in order in the top of the eighth. In the bottom of the inning, the Athletics batted for the last time in Municipal Stadium as the Kansas City Athletics. Don McMahon retired the first two batters. Monday and Gosger singled but McMahon struck out Sal Bando for the last out.

For the White Sox, Buford led off the ninth with a walk, but Agee flied out to center fielder Monday, Boyer fouled out to third baseman Bando, and McCraw fouled out to Roof to end the game. According to the Kansas City Times, “There was a mighty roar from the more than 3,000 fans who remained in the stadium when Phil Roof made the final out of the game at 10:17 o’clock, bringing the A’s 1967 home season to a close.”11

The mood on the White Sox side was sober. The White Sox, who could have found themselves atop the league, were in fourth place at day’s end. Said The Sporting News, “After the Kansas City debacle, a reporter asked Stanky if he thought the Sox still had a chance for the flag. Replied Stanky: ‘I was hired to manage 162 games and both the club and I will be around until the finish.’”12 Summing up the missed opportunity to gain ground in the pennant race, Stanky said, “I’ll remember Kansas City a long time, I guess.”13 Though they were last-place finishers, the Athletics played a key role in determining the pennant on their last day in Kansas City.

The Athletics still had four games to play in Yankee Stadium before closing out the season and their history. After a day off they had another twilight-night doubleheader on Friday, September 29, and day games on Saturday and Sunday. They lost all four games. Catfish Hunter not only pitched the last home game for the Athletics but the last road game as well in Yankee Stadium, losing 4-3. His career flourished in Oakland and then as a member of the Yankees.14 He was inducted into the Hall of Fame in 1987.