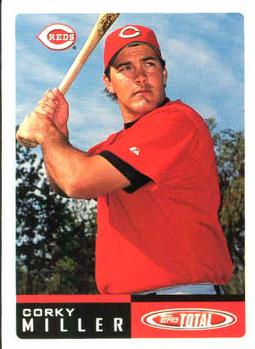 By the time Corky Miller had been three weeks in the major leagues, observers had him pretty well pegged: solid catcher, excellent handler of pitchers, “and a great guy to have in the clubhouse.”1 Also, because of his limitations as a hitter, a guy “more likely to play out his career in Chattanooga and Indianapolis” than with the parent Cincinnati Reds.2

Three years after signing as an undrafted free agent,3 Miller had gotten a September call-up only because of an injury to Reds catcher Jason LaRue.4 On September 27, 2001, Miller went into his 10th big-league game — the Philadelphia Phillies’ final home game of the season before a “wildly enthusiastic”5 Veterans Stadium crowd of 38,602 — with a .120 batting average. So it was a somewhat novel experience to find himself on third base with one out in the top of the fifth inning. The Reds had just taken a 1-0 lead on Wilton Guerrero’s RBI single, which came after hits by Todd Walker and Miller, and a sacrifice by pitcher Lance Davis.

What happened next — over what the Philadelphia Inquirer’s Sam Carchidi characterized as “several long seconds”6 — was minutely dissected on the next day’s sports pages. The mental wheels were spinning in both dugouts and the two teams’ strategies were about to collide head-on. Looking to steal an additional run in a tight game and with a good bunter, Brady Clark, at the plate, Reds manager Bob Boone called for a suicide squeeze. When the pitch count reached 1-and-1, Phillies catcher Johnny Estrada got the sign from his manager, Larry Bowa, for a throw to first base.

Miller stepped off third. When the pitcher, left-hander Omar Daal, failed to look over, Miller took a slow walking lead. When Daal lifted his foot, Miller took off. Third baseman Scott Rolen shouted that the runner was going. Estrada looked up, saw Miller bearing down on him, and uttered two words: “Oh, no.”7

The Phillies hadn’t seen this coming. “There’s nothing unusual about going to first in that situation,” Estrada explained later. “You don’t expect the catcher to break from third.”8

As soon as Daal raised his leg, Miller recognized that the throw was going to first. He didn’t hesitate. “Once a lefty picks up his leg, it’s go time,” he said. “He has no chance to change direction.”9 After that, Miller added, “I just wanted to go as fast as I could, and that’s not too fast.”10

Taking the pickoff throw from Daal, Travis Lee, the Phils’ lefty-throwing first baseman, had to turn in order to reroute the ball to home plate. Miller slid safely under Lee’s “high, late and hurried” throw.11

Philadelphia scored in the seventh when Rolen drew a leadoff walk and came around on two errors and an infield out, but Cincinnati won the game, 2-1, Davis and two relievers combining on a two-hitter. The loss deprived Philadelphia of a chance to move into a first-place tie in the National League East; the Phils eventually finished two games behind the Atlanta Braves and missed the playoffs.

Miller played 17 years and became a folk hero in the Reds organization. The club’s long-standing ban on facial hair was lifted shortly after his signing and he thereafter affected a flamboyant Fu Manchu mustache. That, along with a bulk that sometimes topped 250 pounds,12 made him an easily recognizable figure. Released, granted free agency, or claimed on waivers a dozen times (and traded once), he did tours with five other organizations. But he always returned to Cincinnati and he was always welcome. For one thing, he was always ready to take one for the team: Between the majors and the minors, he was hit by 210 pitches — a talent he had honed as far back as college, when he was plunked 54 times in two seasons at Nevada-Reno.13 After the Reds moved their Triple-A affiliate from Indianapolis to Louisville, he played 10 years there, the last six serving as backup catcher and mentor to backstop prospects. One of his first protégés was Tucker Barnhart, who joined the Reds in 2014, became their number-one catcher in 2016, and won the Gold Glove in 2017.

By the time he retired, Miller held the Louisville’s franchise record for games played (553). He had been honored with bobblehead dolls in both Louisville and Chattanooga. He was the first Louisville player to have his uniform number (8) retired.

Miller never played a full season in the major leagues. Over parts of 11 seasons, he amassed about as many at-bats as a full-time player would log in one. On July 31, 2013, at age 37, Miller singled off San Diego’s Eric Stults for his milestone 100th big-league hit. The same day, while catching a 4-1 Reds victory, he reached base the hard way against Miles Mikolas, his final hit-by-pitch in the majors. Two months later he departed “The Show” with a lifetime batting average of .193. The original assessment of Corky Miller proved to be right on the money.

His major-league record showed only a single stolen-base attempt. On that occasion, as Bob Boone observed, “all the stars were lined up right.”14

In a way, that one perfect moment encapsulated Corky Miller’s entire career. “My stealing home is not something that’s designed to happen. It just happened by mistake,” he said that night. “Sometimes things work out like that.”15

3 Miller was drafted out of high school by the California Angels in the 23rd round of the 1994 amateur draft, but did not sign. Instead he attended college, then signed with the Reds as a free agent on June 5, 1998.