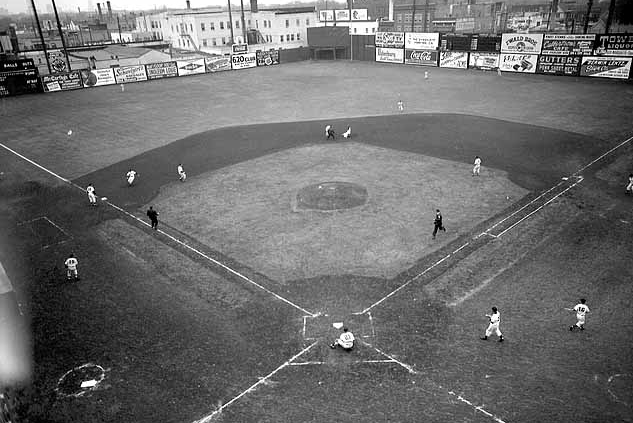 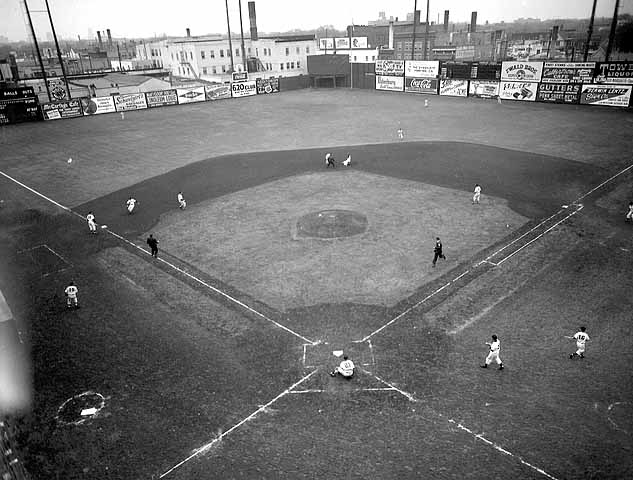 For 60 seasons, the Minneapolis Millers made their home at a place described by former Minneapolis Tribune writer Dave Mona as “soggy, foul, rotten, and thoroughly wonderful Nicollet Park.”1 One of the most revered of minor-league ballparks, Nicollet Park opened during the 1896 season.

Although the playing area at Nicollet Park seemed spacious — especially in contrast to tiny Athletic Park, which the Millers had moved from — soon enough the ballpark at the corner of 31st Street and Nicollet Avenue acquired its own reputation as a bandbox.

Sluggers, particularly left-handed swingers, took advantage of the short distance, only 279 feet, down the right-field line. In 1933, the Millers’ Joe Hauser set a professional single-season record with 69 home runs, 50 of them hit at Nicollet Park.

In 1955, the final season for Nicollet Park, the Millers set a league record by hitting 241 home runs in addition to winning the regular-season American Association pennant for the ninth time,2 tying the St. Paul Saints for the league record. Many of the years the Millers had finished first, the Junior World Series (formerly the Little World Series), a championship series between the American Association and International League, had not been played. And since the mid-1930s, a playoff was held to determine the Association representative in the Junior Series; the Millers had never made it past the first round.

This time the Millers swept both the Denver Bears and Omaha Cardinals to advance to the Junior World Series in what would be the final games played at Nicollet Park. A few miles south of the Minneapolis city limits, construction was underway on a new stadium, one that civic leaders hoped would eventually lure a major-league team to the area.

The Series opponents were the Rochester Red Wings, managed by Dixie Walker, who had played for the Newark Bears in the Junior World Series in 1932, the only other time the Millers had been in the series. Rochester in 1955 had finished fourth in the International League with a 76-77 record, 18½ games behind the first-place Montreal Royals. Like the Millers, the Red Wings were hot in the postseason, winning eight of nine games in beating Montreal and the Toronto Maple Leafs to get to the Junior Series.

The series opened with three games in Rochester. Al Worthington, a 19-game winner during the regular season, was on the mound as Minneapolis beat the Red Wings 8-3. The next night, Cot Deal went the distance for Rochester to even the series. The third game, scheduled for Friday night, September 23, was rained out as rumors swirled that Millers skipper Bill Rigney would be named the new manager of the New York Giants, succeeding Leo Durocher.3

The next morning Rigney was awakened in his room at the Power Hotel in Rochester with a call from Giants owner Horace Stoneham telling him he was getting the managing job.4 Rigney was well regarded in Minneapolis, even by those who had other issues with him. A letter to the editor in the Minneapolis Tribune appeared during the series from a fan, G. Rice, who found Rigney to be “the fine field general the sports writers say he is.” However, Rice had a complaint: “Rigney’s language on the field is not only loud enough to be audible to far reaches of the stands, it is uncommonly obscene and blasphemous.”5

Rigney’s language, florid or foul, didn’t help the Millers on Saturday night, as Rochester won 11-1 to take the lead in the series.

Both teams boarded a 60-seat DC-4 for a flight to Minneapolis for the final games.6 Al Worthington had already gone ahead on a commercial flight to rest up for Game Four. A large crowd turned out for the last Sunday game at Nicollet Park, with a replica of the ballpark symbolically burned on the mound before the game. Worthington then burned the Red Wings, striking out 12 as the Millers won, 7-3, to even the series.

With Cot Deal pitching another complete game, Rochester won the fifth game, and the Millers faced elimination in what could be the final game at Nicollet. However, Worthington and George Wilson prevented that. The right-hander took the mound in the eighth inning, with the Millers trailing 3-2. Wilson, who had hit 31 home runs during the regular season, had been hitless in the first five games of the Junior Series, but his homer in the bottom of the eighth tied the score. He homered again in the 10th to give Worthington his third win of the series and force a decisive game.

Nearly 10,000 fans got into Nicollet Park for its final game, on Wednesday night, September 28. Approximately 1,500 were turned away.7

The series had depleted the pitching ranks to the point that Rigney resorted to a strange method for determining the Game Seven starter. According to Tom Briere, a sportswriter for the Minneapolis Tribune and the official scorer at Nicollet Park, Rigney rolled a ball into the middle of the locker room before the final game and asked, “Who wants it?”8

Bud Byerly, normally a reliever, got the starting assignment, although he didn’t recall Rigney asking for volunteers in this manner. “We were hurting for pitching,” Byerly said later. “Rigney wanted somebody, and I said I’d try it. I don’t know of anybody else who was ready to go.”9

Even though he was well rested, Byerly didn’t last long. The first batter of the game, Howie Phillips, connected on a 2-and-1 pitch for a home run, a fitting start to Nicollet Park’s final game. Singles by Jackie Brandt and Allie Clark, sandwiched around a groundout by Joe Cunningham, produced another run. An error and hit batsman helped Rochester load the bases with two out and forced Byerly from the mound in favor of Floyd Melliere, who ended the threat and then quieted the Red Wings in the ensuing innings.

Behind Deal, who was pitching on one day’s rest, the Red Wings held the 2-0 lead into the fourth before Monte Irvin beat out an infield single with two out and went to third on a double by Rance Pless. Bob Lennon, who had tied with Wilson for the team lead with 31 home runs during the regular season, sent a 0-and-2 fastball over the fence in right to put the Millers ahead 3-2. Carl Sawatski followed Lennon with one of his own, a line-drive home run. Irvin increased the lead to 5-2 with a long home run in the sixth.

The Red Wings finally got to Melliere in the seventh, scoring two runs on a walk, double, and throwing error. With the lead cut to a run, Rigney waited no longer. He signaled to the bullpen for a weary Worthington, who trudged in and closed out the inning. The Millers gave Worthington a cushion with four runs in the bottom of the seventh — two on a home run by Don Bollweg, the last ever hit at Nicollet, and the final two on a double by Lennon.

Worthington retired the Red Wings in order in the eighth and struck out the first two batters in the ninth before giving up a pair of singles. The next batter was Brandt, who tried to keep the rally going by bunting for a base hit on Worthington’s first pitch. However, Worthington charged, pounced, and threw Brandt out to end the game, the Junior World Series, and Nicollet Park.

Some souvenir hunters kicked away boards from the left-field bleachers but most just cheered their champions and looked around for one last time.

Worthington later said he had a feeling that the pitch to Brandt would be the final one. “I do remember thinking on the mound, ‘You are throwing the last pitch in the ballpark.’” he recalled. “It was somewhat of a sad feeling.”10

Tom Briere’s scorebook is the source of the play-by-play information.

3 The Millers were a farm team of the Giants.