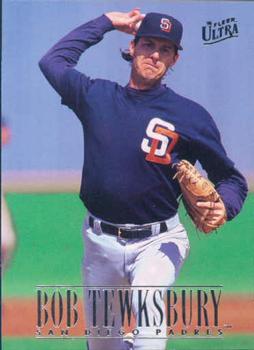 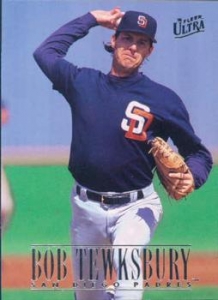 On September 29, 1996, the last day of the regular season, the Padres and Dodgers were in a dead heat, tied for first place and scheduled to play each other at Dodger Stadium. The winner would be the National League West champion, while the loser would advance to the playoffs as the NL wild card. While both teams were guaranteed to play beyond that afternoon, there was still a division title at stake. Not since 1908 had an NL league or division title been decided in a head-to-head matchup on the last day of the season, but that’s exactly what happened that Sunday afternoon.1

The Padres came to Los Angeles with no margin for error. Trailing the Dodgers by two games, they needed a sweep to win the division title. The stage was set for the season finale when the Padres took the first two games of the series. Ken Caminiti won the September 27 series opener with a 10th-inning double, giving the Padres a 5-2 victory and assuring San Diego of at least a tie for the wild-card berth. Tony Gwynn was the hero the next day, breaking a 2-2 tie in the eighth with a two-run single as the Padres assured themselves of a postseason spot and gave them a shot at the division title with a 4-2 win.

For the third game, the Padres passed on starting the team’s number-two hurler, Joey Hamilton (15-9, 4.17), on three days’ rest and instead turned to right-hander Bob Tewksbury, who hadn’t started since September 17.2 Tewksbury entered the contest with a 10-10 record and a 4.46 ERA. The Dodgers countered with right-hander Ramon Martinez (15-6, 3.44), who was 7-0 in his last nine starts. He hadn’t lost since August 7. On paper the pivotal contest seemed to favor the Dodgers.

It was a perfect day for baseball in Los Angeles. Dodger Stadium basked in a sun-drenched 78 degrees against the picturesque backdrop of the San Gabriel Mountains when Martinez threw the first pitch at 1:05 P.M. The lanky, hard-throwing Martinez retired the Padres in order on 11 pitches in the top of the first. Tony Gwynn lined out to shortstop, Steve Finley followed with a groundout to first and Caminiti struck out swinging. Tewksbury matched Martinez’s first-inning effort and needed only 12 pitches to set the Dodgers down 1-2-3.

Right-hander Pedro Astacio came on in relief of Martinez in the top of the second. Knowing a playoff spot was already clinched, the Dodgers opted to remove their streaking right-hander to allow him to start Game One of the NLDS against either the Braves or Cardinals. The 27-year-old Astacio was earmarked to come out of the bullpen during the NLDS and was called upon to eat as many innings as he could. The Dodgers hurler had been particularly effective in this area throughout the year and entered the game with record of 9-8 and a 3.55 ERA over an impressive 205⅓ innings pitched.

Astacio picked up where Martinez left off. From the second inning through the seventh, the right-hander yielded only a pair of hits to Wally Joyner (a one-out double in the second and a leadoff single in the seventh) and a pair of walks in the fifth. Tewksbury was equally as effective for the Padres. He scattered three hits over seven innings and only twice allowed a Dodger baserunner to advance to second base.

The first real threat of the game was mounted in the top of the eighth inning. Jody Reed, the Padres’ dependable second baseman, started the inning by grounding out to short. Scott Livingstone, pinch-hitting for Tewksbury, followed with a seeing-eye roller that found the hole between short and third. Sensing that the next run might be a pennant clincher, Padres manager Bruce Bochy lifted Livingstone in favor of pinch-runner Doug Dascenzo. Tony Gwynn walked, sending Dascenzo to second and ending Astacio’s afternoon. Dodgers manager Bill Russell played the percentages and called on left-hander Scott Radinsky to face the left-handed-hitting Finley. The Padres center fielder greeted Radinsky with a groundball into right field, where Raul Mondesi came up throwing and nailed Dascenzo at the plate. Radinsky intentionally walked Caminiti and escaped the inning when he struck out Greg Vaughn to keep the game scoreless.

Bochy brought in rookie right-hander Dario Veras to face the Dodgers in the bottom of the eighth inning. The 26-year-old Dominican responded with a scoreless frame in which he yielded a one-out walk to Delino DeShields, who advanced to second with a two-out stolen base.

Russell, who had replaced the legendary Tommy Lasorda after he suffered a midseason heart attack, summoned closer Todd Worrell to pitch the ninth for the Dodgers. Worrell, who recorded a career-high and league-leading 44 saves that season, retired the Padres in order and kept the game scoreless. It was his only inning of work. Veras kept the game scoreless when he pitched around a leadoff walk to center fielder Wayne Kirby in the bottom on the ninth to send the game into extra innings.

Right-hander Chan Ho Park, the Dodgers’ rookie reliever from South Korea, came on in the 10th inning and easily retired the Padres. After striking out Reed to start the inning, Park retired future Hall of Famers Rickey Henderson and Tony Gwynn on consecutive grounders to shortstop Greg Gagne. Veras, working his third inning, navigated his way around a one-out single to Tim Wallach in the bottom of the inning to send the game into the 11th.

Finley led off the top of the 11th with a groundball single up the middle. He advanced to third when Caminiti singled to right. With runners at the corners and no one out, Bochy called on Chris Gwynn, Tony’s younger brother, to hit for Veras. Gwynn, who was raised in the Dodgers organization, became the man of the hour when he sent a double to deep right-center, plating Finley and Caminiti.3 (Chris Gwynn had been cast aside by the Dodgers during the previous offseason. The at-bat was the last regular-season plate appearance of his career.) Park settled down and retired Joyner, Chris Gomez, and Brian Johnson to keep the score at 2-0.

The Padres turned to closer Trevor Hoffman, who had already saved 41 games, to nail down the team’s first division title since 1984. Hoffman came through. He retired Greg Gagne on a groundball to short and pinch-hitter Dave Hansen on a fly ball to deep right-center before he ended the game with his signature changeup that caught Chad Curtis. It was Hoffman’s third save of the weekend.

The victory was sweet revenge for the Padres. On September 30, 1995, they had been forced to watch as the Dodgers celebrated their Western Division title at Jack Murphy Stadium. One day short of a year to the day, at Dodger Stadium, the Padres celebrated the franchise’s second division championship.4

Both teams advanced to the NLDS. The Dodgers faced the defending World Series champion Atlanta Braves and were swept in three straight, losing to future Hall of Famers John Smoltz, Greg Maddux, and Tom Glavine. The Padres fared no better against the Cardinals and were also swept in three straight as future Hall of Famer Dennis Eckersley saved all three games for St. Louis.

2 The Padres had shortened the rotation in an effort to keep pace with the Dodgers.