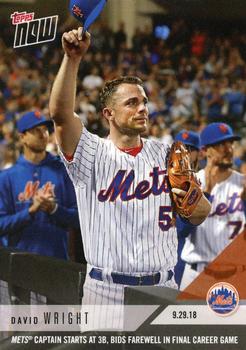 The Mets and the Marlins were finishing their disappointing seasons. There would be no playoff appearance for either team. Yet the seats at Citi Field filled up quickly this evening. Several weeks ago fans bought up all the unsold tickets within hours after the Mets announced that this game would be the last chance to see David Wright take the field as a Met. After many attempts to return from three surgical procedures for his neck, back and shoulder as well as dealing with the effects of spinal stenosis, he was going to start at third base for the final time in his storied career with the Mets.1

Wright spent his entire career with the Mets, joining the organization at age 18 when he was drafted 38th overall from Hickory High School in Chesapeake, Virginia. He was one of the first of several exceptional players to come out of southeastern Virginia in recent years. Others are Ryan Zimmerman, the Upton brothers and Mark Reynolds.

Marlins manager Don Mattingly noted the excitement that permeated the ballpark: “This is more like a playoff atmosphere. When [we came] out for batting practice, there [were] already people sitting in those top seats and you know they’re going to fill up.”2

After Wright caught the first pitch from his young daughter, he trotted out of the dugout and took the field alone. After reaching third base, he kicked the bag as he had done throughout his career and then saluted the crowd. Jose Reyes was next to exit the dugout. He ran straight to Wright and gave him a big hug. The duo was starting their 878th game together, the most for any two players in Mets history.

Steven Matz took the mound for the Mets. Although he had pitched well in the last two months of the season, the Mets offense failed to help him earn any wins since late July. In the first inning, Matz gave up a leadoff single to Miguel Rojas. Rojas reached second base when Peter O’Brien was walked but Matz struck out Lewis Brinson for the third out.

Reyes led off the Mets half of the inning with a double off Trevor Richards. Jeff McNeil bunted Reyes to third, giving Wright the chance to bring him home. Richards eventually walked Wright.  When Michael Conforto hit into a double play, Reyes was stranded at third.

“That first inning, you couldn’t have [drawn] it up any better,” Wright said later. “[Reyes] hits a double. And all I need to do was get him in. And I got a pitch to do it and fouled it off, but I drew the walk. It was really cool walking up to the plate, seeing him on third.”3

In the top of the second, Wright had his only opportunity to play defense. He fielded a grounder by Bryan Holaday and slung a side-arm throw — the only way he could still throw because of his injuries — to first for the out.

Matz continued to pitch well. He didn’t allow another Marlins hit until the fourth, when Starlin Castro doubled to lead off. Matz struck out the next two batters for his fifth and sixth strikeouts, then got a fly ball to end another Marlins threat.

Richards also kept the Mets in check. He allowed just four more hits, all singles, before Mattingly removed him with two outs in the seventh inning.

Wright led off the fourth inning. He took the first pitch. Then he swung at a fastball and watched as the ball climbed higher and higher. O’Brien, the first baseman, drifted over and made a difficult catch right at the fence. Wright smiled as he walked back to the dugout although it was clear that he had hoped for one more chance.

Wright took the field in the top of the fifth. After he fielded one final warm-up groundball, manager Mickey Callaway walked to the home-plate umpire to make a defensive switch. Amed Rosario entered the game at shortstop while Reyes moved to third base, replacing his longtime teammate.

After hugging Reyes and shaking hands with the third-base umpire, Wright walked off the field. It was clear that the finality of the situation had gotten to him. He never stopped smiling as the fans stood and cheered. But the television cameras showed that his eyes were moist.

“I can’t sit here and tell you that I’m good with where I’m at right now,” he said shortly after leaving. “That would be a lie and that would be false, because you love something so much and you want to continue that. I got a little taste of that, and I’m already feeling it physically.”4

Three innings later, O’Brien came to bat and the fans at Citi Field booed him with gusto. The booing continued until he flied out to center field. Wright was asked about the booing after the game and said, “I feel bad for the guy, but I don’t feel bad for the guy.”5 As for O’Brien, he said, “That’s the atmosphere that you like to play in. As an away guy, getting booed on the road, it’s the best feeling.”6

Matz pitched two more scoreless innings, getting the Marlins out in order in the sixth and seventh. When he was replaced by Taylor Bashlor in the seventh, Matz had struck out eight Marlins and given up three hits.

On a typical night, Mets fans would have given more notice to his performance, but this was not Matz’s night. “David’s always been a generous guy so he gave us a playoff-type atmosphere even when we’re not in the mix,” said Matz when asked his mound performance.7

Richards continued to do his part for the Marlins. Rosario reached first on a fielder’s choice in the fifth. He moved to second on another fielder’s-choice play to the second baseman and then reached third with his 24th stolen base of the season. Richards got out of the jam by striking out Jay Bruce.

The scene repeated itself in the third when Brandon Nimmo led off with a single. Nimmo, who provided an offensive spark for the Mets all season, pulled up at first clutching at his hamstring and had to be removed.

Jack Reinheimer replaced Nimmo and reached third on Todd Frazier’s pinch-hit single down the first-base line. Mattingly pulled Richards and sent for Adam Conley from the Marlins bullpen. Conley got Reyes to hit an 0-and-2 fastball to center field for the third out.

Both teams repeatedly went to the bullpen over the next six innings as they searched for the elusive run to give them the lead and hopefully the win. The Mets pitchers prevented the Marlins from getting any runners into scoring position as they surrendered just two hits.

The Mets continued to get ever so close to scoring several more times. They left runners on second and third in the 10th and left one in scoring position in the 12th. They could not bring any of them home and fans were forced to continue to wait to see Wright make one last appearance.

That wait ended in the 13th inning with Jarlin Garcia on the mound for the Marlins. Conforto led off with a single. He reached second when Garcia walked Reinheimer. Mattingly brought in righthander Javy Guerra to face the righty Austin Jackson. Jackson hit the first pitch to deep center field for a double that scored Conforto. The Mets claimed a 1-0 victory to truly make the night one to remember, not just for the fans but for Wright.

Wright returned to the field one final time after the game. He faced the fans saying, “This is amazing. I can’t thank you guys enough for sticking around. This is love. I can’t say anything else. This is love. You welcomed me with open arms as a 21-year-old kid. Thank you from the bottom of my heart for accepting me. Thank you for cheering for me. And thank you for allowing me to live out my dream.”8

When he walked off the field, Wright had played more games as a Met than any other player except Ed Kranepool. Although his presence will be missed by Mets fans in seasons to come, there was no doubt that one day Wright’s number 5 would be retired, placing him alongside other great Mets players who have had that honor.

Wright was formally released from the Mets roster on January 7, 2019. He joined the front office as a special adviser to Chief Operating Officer Jeff Wilpon and General Manager Brodie Van Wagenen. “Playing in this city and for this team was a dream come true. I look forward to contributing and taking on the challenges of this new role,” said Wright when the announcement was made.9

In addition to the sources cited in the Notes, the author used Baseball-Reference.com and Retrosheet.org for box score, player, team, and season information as well as pitching and batting game logs, and other pertinent material.