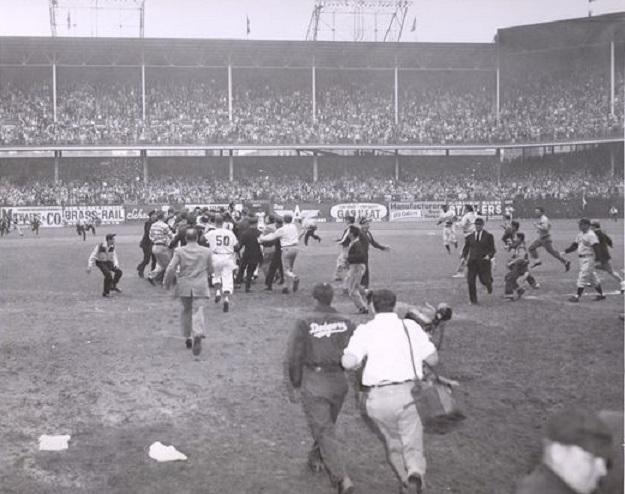 The reigning World Series champion Brooklyn Dodgers finally made a push to the National League pennant late in the 1956 season. After being 1 ½ games out of first place following a doubleheader split September 7, the Dodgers charged forward and held a one-game lead on September 30.

Brooklyn had swept the Pirates in a doubleheader on September 29, 6-2 and 3-1. Sal Maglie won the first game. Clem Labine, usually the team’s relief ace, started the second game and went the whole way.1 The second-place Milwaukee Braves, meanwhile, lost 2-1 to the St. Louis Cardinals. Now, it was coming down to the final game of the season. Could Brooklyn win the game and the pennant? A Dodgers loss against Pittsburgh and a Braves win against St. Louis would force a playoff.

Don Newcombe took the mound for Brooklyn against Vern Law. Newcombe brought a 26-7 record into the game. Law, meanwhile, was trying to avoid his 16th loss for the Pirates, who occupied seventh place in the eight-team NL, 26 games out of first.

Newcombe retired the side in order in the top of the first inning The Dodgers jumped on Law in the bottom of the frame. Law walked leadoff batter Jim Gilliam and gave up a single to Pee Wee Reese that sent Gilliam to third. Duke Snider now stepped to the plate. He sent the first pitch from Law over the Ebbets Field outfield wall for his league-leading 42nd home run of the season. Law got the next two batters out, but gave up a single to Gil Hodges. Pirates manager Bobby Bragan had seen enough, although the score was still just 3-0. He replaced Law with Roy Face, who got the third out.

Newcombe kept the Pirates in check in the second inning but faltered in the third. He gave up a single to leadoff batter Jack Shepard and walked Dick Cole. After throwing a wild pitch that allowed Shepard and Cole to advance, Roberto Clemente stroked a two-run single. The score was now 3-2.

In the bottom of the third, Bob Purkey came on in relief for Pittsburgh. Reese grounded out to start the frame; Snider followed up by flying out to center field. Jackie Robinson then hit his 10th home run of the season. It was the 137th homer of his career and also his last.2

Newcombe did not have one of his better days on the mound and allowed six earned runs. After giving up the two runs in the third, he held the Pirates to one hit in each of the fourth, fifth, and sixth innings. The Pirates failed to score each time, although they got a runner to third when Lee Walls tripled with one out in the fourth.

Ron Kline took over the pitching duties for the Pirates in the fifth inning. He gave up a leadoff double to Newcombe, who went to third on Gilliam’s grounder to first. Newcombe scored when Reese hit a sacrifice fly to left field. Snider followed with his second home run of the game and 43rd of the season. Robinson struck out, and the inning ended with the Dodgers leading 6-2. They padded that lead in the sixth when Sandy Amorós hit a leadoff home run.

The Pirates, down 7-2, scored three runs off Newcombe in the seventh inning. Dick Groat led off with a double to right field. Consecutive singles by Bill Mazeroski and Shepard loaded the bases. Newcombe got two outs and nearly wiggled out of the threat, but Bill Virdon brought home three runs with a double to center field. The Dodgers lead had been to cut to 7-5.

Bob Friend took the mound for the Pirates and held the Dodgers scoreless in the seventh inning. Walls homered off Newcombe in the top of the eighth, cutting the Pirates’ deficit to a single run at 7-6 and knocking the Brooklyn starter out of the game. Dodgers manager Walter Alston summoned second-year right-hander Don Bessent from the bullpen.

Bessent had saved eight games in 37 relief appearances on the season. Labine was unavailable after the previous day’s work in his third start of the season.3 Bessent gave up a hit to Groat, and third baseman Robinson made an error on pinch-hitter Gene Freese’s grounder. Jack Shepard flew out and Dale Long struck out to end the threat. Amorós gave the Dodgers a little cushion when he led off the bottom of the eighth with his second solo home run of the game.

Clemente opened the ninth with a single off Bessent. Virdon, though, hit into a double play, and Hank Foiles struck out to end the game. The Dodgers were 8-6 victors.

The Braves beat the Cardinals 4-2, but it didn’t matter. Brooklyn had won its second straight pennant. Once again, the Dodgers would face the New York Yankees in the World Series. Brooklyn fans looked forward to seeing their “Bums” celebrate in October one more time.

2 Ibid. This was Robinson’s final regular-season homer; he retired after the 1956 season. He also homered once in the World Series.