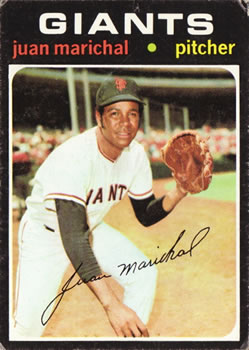 As play began on the final day of the 1971 regular season, the San Francisco Giants were clinging to a one-game lead over the Los Angeles Dodgers in the National League West. A once-comfortable 8½-game lead on September 5 had all but evaporated as the Giants lost 16 of their next 23 games. During that stretch, the Dodgers had gone 14-8. Now the Dodgers would host Houston while the Giants faced the Padres in San Diego.

San Francisco had been the talk of baseball early in ’71, entering June with a blistering 37-14 record, best in the majors. They featured a versatile lineup with table-setters like Tito Fuentes and rookie shortstop Chris Speier, and sluggers like Bobby Bonds, Willie McCovey, and a still potent Willie Mays. A deep bullpen that included Jerry Johnson, Steve Hamilton, and 41-year-old Don McMahon offset an uneven starting rotation that featured two proven right-handers in Juan Marichal and Gaylord Perry.

For the last game, San Francisco manager Charlie Fox sent Marichal to the mound on his customary three days of rest. The longtime ace of the Giants staff had won his last three starts and entered the contest with a 17-11 record. San Diego’s starter was left-hander Dave Roberts. In Los Angeles the Dodgers would throw Don Sutton against Jack Billingham for the Astros. A Dodgers win coupled with a Giants loss would mean a one-game playoff for the divisional title.

The Giants got on the board first in the top of the fourth inning. Willie Mays, 40 years old and playing his 20th season with the Giants, doubled in Tito Fuentes, who had led off with a single. After Willie McCovey flied out, Mays scored on Dave Kingman’s sixth home run of the season. Kingman had joined the team in July after hitting 26 homers in less than 400 at bats at Triple-A Phoenix.

The Giants led 3-0. The scoreboard in San Diego Stadium showed that the Dodgers had also taken a fourth-inning lead, 1-0, in Los Angeles.

In the fifth the Padres scored an unearned run, cutting their deficit to 3-1. Ollie Brown reached when Marichal dropped a throw at first base, moved to second on a groundout, and then scored on Bob Barton‘s RBI single to center. But Marichal ended the threat by getting Tommy Dean to hit into a 6-4-3 double play. The Dominican right-hander held the Padres in check through the eighth, giving up just two harmless singles.

As they batted in the top of the ninth, the scoreboard-watching Giants could see that the Dodgers were still ahead of Houston, 2-1. Speier led off against reliever Al Severinsen with an opposite-field double. Marichal’s sacrifice bunt moved Speier to third. Ken Henderson then smacked a run-scoring double into left-center-field. After moving to third on a flyout, Henderson was waved home when Severinsen committed a balk while pitching to Mays. The Giants led 5-1 and were three outs away.

With one out in the bottom of the ninth, San Diego third baseman Garry Jestadt doubled. But Marichal retired Johnny Jeter on a fly ball to Kingman in right, and when Speier threw out Nate Colbert on a ground ball to short, the Giants had clinched the NL West. In the biggest game of the year, Marichal had thrown a five-hit complete game, striking out five and walking none.

Within minutes of the final out in San Diego, Sutton and the Dodgers nailed down a 2-1 victory over the Astros. “So, tired and happy,” Mays would later write in his autobiography, “we had won the Western Division championship by a fat one game.”

Two days later, on October 2, the Giants hosted Pittsburgh in the first game of the National League Championship series at Candlestick Park. San Francisco won the opener, 5-4, behind Gaylord Perry. But the Pirates swept the next three games, clinching the series back in Pittsburgh. First baseman Bob Robertson hit .438 with four homers and six RBIs in the four games. It would be 16 years before the Giants would win another NL West divisional title.