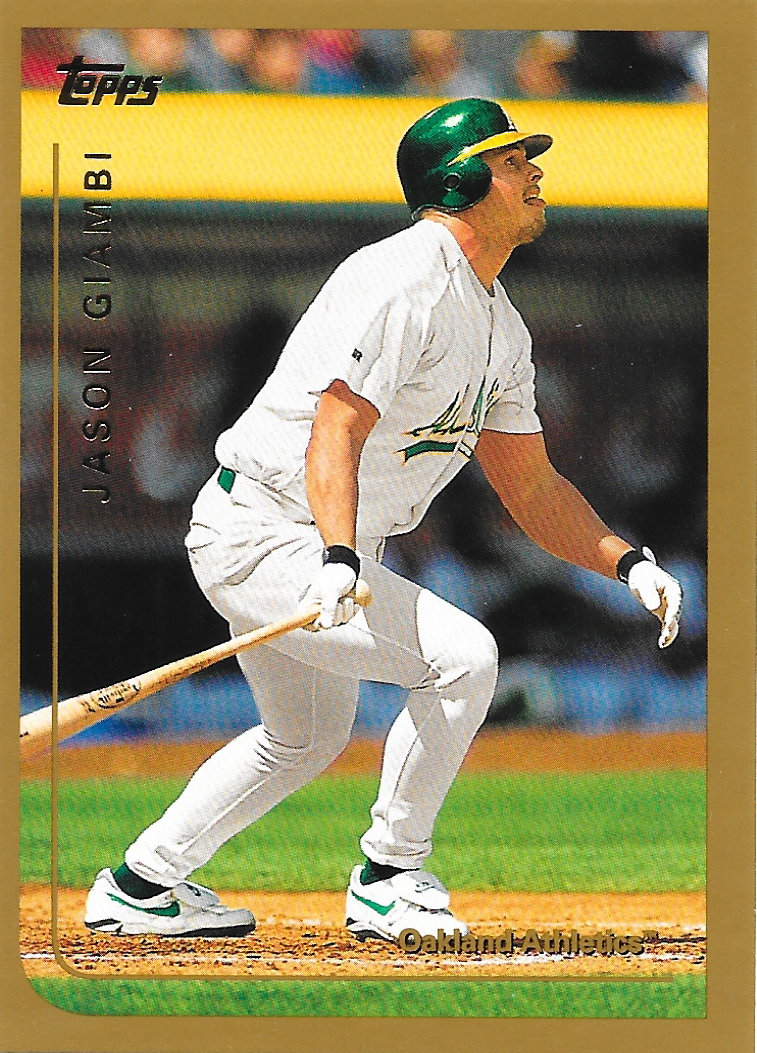 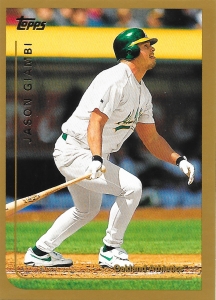 Inconsistency is not usually a recipe for success in baseball, but you couldn’t tell that to the 2000 Oakland Athletics. After starting the season with a lackluster 25-26 record, their young hitters, led by Ben Grieve and Terrence Long, went on a tear, and the A’s won 20 of their next 24 games. The club then stumbled through losing months in July and August, capped off by a frustrating walk-off loss to the Toronto Blue Jays on September 1 that left them with a mediocre 69-64 mark. Fortunately for Oakland, the first-place Seattle Mariners had lost 15 of their previous 18 games, which allowed the A’s to remain a mere 2½ games back.

The Mariners and Athletics both picked up the pace for the remainder of the season. Oakland’s offense was spearheaded by 29-year-old slugger Jason Giambi, who hit .400 with 13 homers and 32 RBIs in September and set a single-season franchise record with a .476 on-base percentage.1 While veteran pitchers Gil Heredia and Kevin Appier were expected to anchor the A’s rotation, the late-season emergence of the Big Three of Tim Hudson, Mark Mulder, and Barry Zito boosted their playoff chances immensely. Mulder and Zito had made their major-league debuts earlier in the season, so the 25-year-old Hudson, in his second big-league season, was the graybeard of the trio. Despite their inexperience, the three young hurlers combined to go 13-1 with a sparkling 1.88 ERA over the final 29 regular-season games.

Heading into their game against the Texas Rangers on the next to last day of the regular season, the Athletics had won 20 of their previous 26 contests. The surge had moved them a half-game ahead of Seattle in the AL West standings and on the verge of their first playoff appearance since 1992, while Cleveland trailed the Mariners by a full game in the hunt for the wild-card spot.

The A’s sent 22-year-old rookie Zito (6-4, 2.80 ERA) to the hill. The last-place Rangers, with the highest team ERA in the American League, countered with Darren Oliver. The beleaguered southpaw had signed a lucrative free-agent contract in January of 2000 only to battle shoulder weakness all season long on the way to posting the worst ERA of his career.2 He came into the game with a horrendous 8.53 ERA in his previous 12 starts.

Oliver’s earned-run average crept even higher in this game, as the A’s sent 13 men to the plate in the bottom of the first inning. He began by yielding four consecutive singles, including a pair of run-scoring line drives by Giambi and Olmedo Saenz. Miguel Tejada followed with an RBI groundout that brought home Giambi. Oliver retired Grieve for the second out of the inning before giving up a single by Adam Piatt and a walk to Eric Chávez to load the bases. With the score already 3-0, Texas manager Johnny Oates gave Oliver the quick hook in favor of rookie Brian Sikorski. The pitching change didn’t help. Sikorski immediately walked in a run and then served up a bases-clearing double to Long for the Oakland center fielder’s second hit of the inning. Not to be outdone, Randy Velarde registered his second hit of the frame by clubbing a two-run home run to make the score 9-0.

Zito struggled in the top of the second inning after sitting on the bench for the A’s lengthy offensive outburst. Four of the first five Texas batters reached base in the inning, yet the damage was limited to an RBI single by Mike Lamb, as Zito buckled down and retired Randy Knorr and Scarborough Green with the bases loaded to keep the score at 9-1.

Giambi’s spectacular month of September continued when he pounded his 43rd home run of the season in the bottom of the third off Sikorski to put the A’s up 10-1. As he rounded the bases, the Oakland fans serenaded him loudly with the familiar “MVP! MVP!” chant.3 Two innings later the A’s scored five more runs on Giambi’s RBI single, his third hit of the game, and a grand slam off the bat of Tejada. The round-tripper was Oakland’s 14th grand slam of the season, a new major-league record.4

After his shaky bottom of the second, Zito settled down and retired 12 of the next 14 batters he faced. He threw six strong innings and left with a commanding 15-1 lead.

With the game safely in hand, manager Art Howe did his best to empty Oakland’s bench. His team just kept on hitting. In the bottom of the seventh inning, the A’s sent 12 men to the plate and scored eight more runs. Sal Fasano and Frank Menechino both knocked in a pair of runs, and then rookie José Ortiz collected his first career RBI with a single that put the A’s up 20-1. Backup outfielder Ryan Christenson put the icing on the cake with a three-run homer to left-center field. Texas managed to push across a run in the ninth inning on an RBI single by B.J. Waszgis, making the final score 23-2.

The 21-run margin was the second most lopsided win in franchise history, exceeded only by the May 18, 1912, game in which the Philadelphia Athletics defeated the Detroit Tigers 24-2 at Shibe Park.5 The 23 runs were the most scored by the A’s since Philadelphia pummeled the Boston Red Sox 24-6 on May 1, 1929.6 The game also set a record for the most runs allowed in Texas Rangers franchise history.7 The debacle was hard for Oates to watch. “Custer must have felt like this,” he said in a postgame interview. “I’m not angry. I’m embarrassed.”8

Seattle and Cleveland both won their games that Saturday, so Oakland’s blowout victory wasn’t enough to clinch a spot in the postseason. With the three teams still separated by 1½ games headed into the final day on the regular-season schedule, a complex set of playoff scenarios loomed, although the A’s were in a very strong position. For Oakland to miss the playoffs, Cleveland would have to win on Sunday and the A’s would have to lose three in a row: Sunday’s match against Texas, a possible makeup game against the Tampa Bay Devil Rays on Monday, and a tie-breaker on Tuesday.9 Giambi was confident about clinching on Sunday. “Final day. Down to one. The big gun (Hudson) going. You can’t ask for much more than that,” he said.10

Cleveland crushed the Blue Jays 11-4 on Sunday to keep the pressure on the A’s and Mariners, who took to the field minutes later on the West Coast. Hudson was dominant on the mound that sunny afternoon, limiting the Rangers to four hits in eight shutout innings, and the A’s won 3-0 to clinch the AL West title. The victory made Hudson a 20-game winner for the first and only time in his career. Moments later, the Mariners defeated the Angels to claim the wild-card spot and eliminate Cleveland.

Oakland, based on its 91-70 record, earned home-field advantage over its ALDS opponents, the New York Yankees (87-74). It was hard to consider New York the underdogs in the series, considering that they were the two-time defending World Series champions and they had the highest payroll in the majors at $92.9 million, nearly three times as much as the penny-pinching A’s.11 After splitting the first four games of the series, the teams returned to Oakland for the fifth and deciding game. Unfortunately for the Athletics, the game was pretty much over before they could swing a bat, as their starter, Heredia, lasted only a third of an inning, surrendering six earned runs to the veteran Yankees hitters. Oakland did manage to score five times against Andy Pettitte, but New York held on to win, 7-5.

The loss to the Yankees was just the beginning of years of playoff heartbreak for Oakland. The A’s made four consecutive appearances in the ALDS from 2000 to 2003, and they lost the deciding fifth game each time. They finally won a Division Series in 2006 by sweeping the Minnesota Twins, although they were in turn swept by the Tigers in the League Championship Series. Their postseason misery continued with a pair of ALDS Game Five losses to the Tigers in 2012 and 2013, and an abrupt elimination in both the 2014 and 2018 wild-card games, giving Oakland eight consecutive losses in winner-take-all games. As of the end of the 2018 season, the A’s hadn’t won a winner-take-all game since they defeated the New York Mets in Game Seven of the 1973 World Series.

3 The “MVP! MVP!” chant was accurate, as Jason Giambi went on to win the 2000 American League Most Valuable Player Award.

9 The possibility of a makeup game on the Monday came about because the September 17, 2000, game between the Athletics and Devil Rays in Tampa Bay was postponed because of Hurricane Gordon.