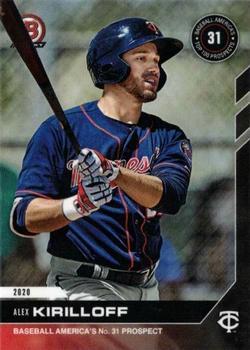 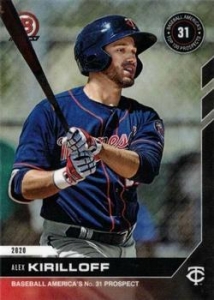 The major leagues’ 2020 pandemic season, with its abbreviated 60-game schedule, was followed by the largest playoff field ever — eight teams per league, kicking off on September 29. While eight games on the second day of the playoffs captivated the sport, Minnesota Twins rookie Alex Kirilloff quietly made history.

Game Two of the best-of-three wild-card series1 between the Twins and Houston Astros was the second game of the day on September 30. Eight contests were staggered over 10 hours. Houston had won Game One, 4-1, at Minnesota’s Target Field. It was the Twins’ 17th consecutive playoff loss dating back to 2004, a major-league record.

The AL Central Division champion Twins needed to bounce back to avoid elimination. Minnesota was 36-24 in the regular season. Houston was 29-31, second in the AL West, qualifying for the playoffs only due to the expanded field. The Astros had won over 100 games every season from 2017 through 2019 and had made it to the World Series twice, winning in 2017.2 But revelations of illegal sign-stealing during the 2017 season led to suspensions for general manager Jeff Luhnow and manager A.J. Hinch — both of whom Houston then fired — during the 2019-20 offseason, and the reconstituted Astros had never got untracked during the pandemic-shortened season.3

Seeking a boost, the Twins turned to one of their top prospects, even though he had never played above Double A. The 22-year-old Kirilloff, Minnesota’s first-round draft selection (15th overall) in June 2016, had spent the 65-day season at Minnesota’s “Alternate Site,” CHS Field, 12 miles east in St. Paul. The 6-foot-2, 195-pound left-handed hitting outfielder/first baseman had impressed the coaching staff. There were no official Alternate Site statistics, but Twins minor-league hitting coordinator Donegal Fergus estimated that Kirilloff hit between .400 and .500 in intrasquad games, with power to all fields.4

The Twins kept Kirilloff at the Alternate Site for most of the season, even when injuries created potential openings on the major-league roster, but his progress was recognized when he was added to the Covid taxi squad for the season-ending series with the Cincinnati Reds.5 Then his taxi-squad status was extended to the wild-card series.

The night before Game One, manager Rocco Baldelli told Kirilloff he’d been added to the wild-card roster. “I was shocked and really excited,” Kirilloff said in a 2022 interview. Kirilloff provided outfield depth with center fielder Byron Buxton recovering from being hit in the head with a pitch on September 25.6

Buxton had returned to start Game One, but the next day his concussion-like symptoms returned.7 When Kirilloff arrived at the clubhouse, a Twins coach let him know he was starting in right field. “I was glad they did it that way, so I could get my sleep the night before,” said Kirilloff.

There was no swarm of Twins well-wishers at Kirilloff’s locker because of Covid separation requirements. “The lockers were spread out so I was actually by myself in a back hallway by our weight room,” Kirilloff said. Still, he recalled 16-year veteran Nelson Cruz saying, “Be yourself and play hard.”

Under partly cloudy skies and a 20 mph breeze blowing from right field to left, the game began at 1:09 P.M. There were no spectators, outside of team guests, as pandemic restrictions had banned fans from all regular-season and first-round playoff games. The required quarantine period after travel kept Kirilloff’s father and mother in Anna, Texas, to watch on television. Kirilloff’s wife, Jordan, however, had been following Covid protocols, so she was at Target Field.

Twins number-one starter Kenta Maeda had pitched Game One, so Baldelli went with top-of-the-rotation option Jose Berrios, a five-year veteran who had won 40 games from 2017 to 2019 and five in 2020. Houston countered with 25-year-old Jose Urquidy, who had pitched in just 18 major-league games — but four were in the 2019 World Series, where he gave up just one run in 10 innings.

When Kirilloff took his position in right, he became the first of 22,297 major-league players to debut as a starter in the playoffs.8 He noted the wind speed and direction and how the ball might carry. He recalled the pregame advice of fellow Twins outfielder Max Kepler about how balls caromed off the wall. “I was just trying to focus on what I could control,” said Kirilloff.

The Astros went three up, three down in the first. In the bottom of the inning, Kepler walked with one out. One out later, Eddie Rosario reached on an error. Miguel Sano walked, loading the bases for Kirilloff’s first major-league at-bat.

It was the culmination of a four-year journey after his selection in the 2016 draft. Kirilloff attended the public Pennsylvania Cyber Charter School and played for Plum Senior High School in Pittsburgh. He learned the craft of hitting from his father, David, a three-decade veteran of baseball development and the owner/operator of an online and traveling hitting program.9 Alex hit .317 and slugged .498 in three minor-league season through 2019.10

At the plate, Kirilloff noticed the difference between playing in smaller, open minor-league parks and expansive, multi-tiered Target Field. “The backdrop and being encompassed in a big-league stadium like that makes the depth perception a little bit different,” said Kirilloff. “I was just going up there to try and hit a ball hard.”

Urquidy got ahead 0-and-2. He threw a 94 mph fastball up and in, which tied up Kirilloff. George Springer caught his fly ball in medium left-center.

In the fourth with two out and the game still scoreless, Berrios walked Michael Brantley and Alex Bregman. On a two-strike pitch, he jammed lefty Kyle Tucker, who hit a weak grounder to the left side. With three infielders positioned to the right of second base, however, the ball rolled into left, scoring Brantley to put the Astros ahead, 1-0.

Kirilloff faced Urquidy again in the fourth with two out. He felt better prepared, having observed the starter’s pitches, their movement, and how he was attacking hitters.  “I think a really good hitter will gather that information and use it their second at-bat and at bats in the future as well,” said Kirilloff. He lined a 1-and-1 fastball into right for his first major-league hit.

Kirilloff’s focus rapidly shifted to baserunning, as he represented the tying run. The 105.9 mph11 line drive looked as though it might skip past right fielder Josh Reddick. Kirilloff said, “My initial thought was trying to get to second base.” But when Reddick corralled the ball, Kirilloff stopped after rounding first, and Jorge Polanco grounded out to end the inning.

In the Astros fifth, Correa led off with a single and Reddick lofted a fly ball to right-center field between Kirilloff and center fielder Kepler. Kirilloff wasn’t sure who had priority; when interviewed in 2022, he did not recall any communication between the outfielders. “Sometimes you can just feel how far the other outfielder is away and get a gauge and commit to it,” he said. Kirilloff raced to the gap as Kepler backed up. Kirilloff extended and made a brilliant sliding catch. Berrios retired the next two batters.

The Twins tied the game in the fifth. After Marwin Gonzalez — an Astro for the first eight seasons of his career, including the 2017 championship season — singled and Ryan Jeffers struck out, lefty Brooks Raley relieved for the Astros, with two lefties in a row scheduled to bat. He walked leadoff hitter Luis Arraez and struck out Kepler.

Because of the new three-batter minimum, however, Raley also had to face right-handed veteran slugger Cruz, who had 36 RBIs in 45 postseason games and a 2020 regular season OPS of 1.503 against lefties. Cruz hit a line drive over Tucker’s head in left for a double. Gonzalez scored the tying run, but Arraez was thrown out at home on a close play, Tucker to shortstop Correa to catcher Martin Maldonado.

Baldelli pulled Berrios from the game after five innings and 75 pitches, even though only four batters had reached base. Cody Stashak retired three straight in the sixth. Kirilloff faced reliever Cristian Javier in the bottom of the inning and flied to right.

Stashak retired the first two batters in the seventh, then Correa gave the Astros a 2-1 lead with a home run to right-center.

The Twins threatened in the eighth, when Cruz walked with one out and Buxton pinch-ran, representing the tying run. With two outs Buxton was picked off, just his 11th caught-stealing in 435 career games.

The Astros added an insurance run in the ninth off the Twins’ fourth pitcher, lefty Taylor Rogers. A leadoff walk to Brantley and a single by Bregman put runners on first and third for Tucker.  With the infield in, he pulled a groundball into right field, boosting Houston’s lead to 3-1.

In the ninth with one out, Kirilloff faced Astros closer Ryan Pressly, hoping to hit a line drive. “I was able to do that but Bregman was in the right position,” said Kirilloff, and the third baseman snared the ball for the second out.

Polanco was called out on strikes, and the Twins were stopped in first round of their ninth consecutive postseason dating back to 2002. The Astros ultimately advanced to Game Seven of the ALCS, where they lost to the Tampa Bay Rays.

After the game Kepler praised Kirilloff, saying, “He played like a vet.”12 “I was flattered by the positive comments,” Kirilloff said.

In 2021 Kirilloff hit .251 in 59 games despite a wrist injury that cut short his first season in mid-July. After three hits in his first eight games in April, he found his stroke and went 6-for-16 with 4 home runs and 9 RBIs before tearing a wrist ligament on May 3. He played through the injury until July 19, finishing with 8 home runs and 34 RBIs.

In addition to the sources cited in the Notes, the author consulted the Baseball-Reference.com, Retrosheet.org, and MLB.com websites.

All quotes and observations by Alex Kirilloff were from a January 13, 2022, interview with the author. David Kirilloff provided information through LinkedIn messaging.

1 In the expanded 2020 playoffs, the wild-card playoff game was expanded to a two-out-of-three series.

2 The Milwaukee Brewers also qualified for the NL playoffs with a 29-31 record. The first time a sub-.500 team made the playoffs was when the 1981 Kansas City Royals qualified by winning the second half of the strike-shortened season but had an overall record of 50-53.

3 Andy Martino’s 2021 book, Cheated: The Inside Story of the Astros Scandal and a Colorful History of Sign Stealing (New York, Doubleday: 2021), provides a thorough account of the sign-stealing scandal and its aftermath.

4 Dan Hayes, “Alex Kirilloff, the Twins’ Unflappable Prospect, Is Ready for His Next Challenge,” The Athletic, October 28, 2020.

6 Buxton had missed the Twins’ final two regular-season games with his injury.

7 Hayes, “Alex Kirilloff, the Twins’ Unflappable Prospect, Is Ready for His Next Challenge.”

8 Two other players made their major-league debuts in the postseason. Mark Kiger was a late-game substitute at second base in Games Three and Four of the 2006 ALCS for the Oakland Athletics. Adalberto Mondesi pinch-hit in the fifth inning of Game Three of the 2015 World Series for the Kansas City Royals.

9 David Kirilloff played varsity baseball at the University of Pittsburgh in 1989. An arm injury halted his playing career, but he continued in baseball as a scout for the Pittsburgh Pirates and coach at Park Point University in Pittsburgh. Operating the baseball hitting program LanguageOfHitting.com, he is in his 30th year in the baseball development business.

10 He did not play in 2017 when he was recovering from Tommy John surgery on his left (throwing) arm. He played his last professional game in September 2019 for the Pensacola in the Southern League playoffs. He hit .381, with home runs in four consecutive games, scoring six times and driving in eight runs.

11 Hayes, “Alex Kirilloff, the Twins’ Unflappable Prospect, Is Ready for His Next Challenge.”

12 Hayes, “Alex Kirilloff, the Twins’ Unflappable Prospect, Is Ready for His Next Challenge.”