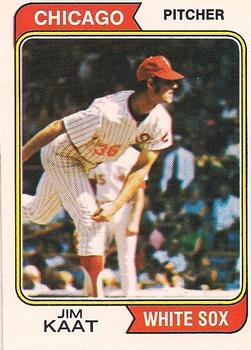 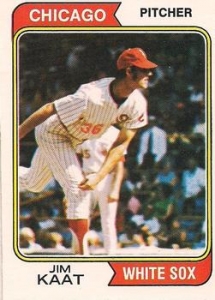 Both Jim Kaat and the Chicago White Sox came into 1973 with high expectations.

As the year opened, Kaat was in his 15th major-league season. The active leader in victories by left-handers with 179, he’d spent his entire career with the same franchise, starting with the Washington Senators in 1959 before moving with the team to Minnesota in 1961, becoming the Twins. Over those years, he’d been an All-Star twice. In 1966, if there had been a Cy Young Award in each league instead of one for both leagues, he would have been a likely candidate in the American League when he led the AL with 25 wins and 19 complete games, finished second in strikeouts (205), and ranked sixth in ERA (2.75). As it was, the sole Cy Young Award winner that year was Sandy Koufax, who led the majors with 27 wins, a 1.73 ERA and 317 strikeouts.

In 1972 Kaat got off to a start that suggested he might have his best season ever. By early July he was 10-2 and his 2.06 ERA ranked fourth in the league. He was talking openly about what it would mean to make a third All-Star team.1 But on July 2 Kaat broke a bone in his pitching hand when he dived into second base to break up a double play. He didn’t throw another pitch in a game for the rest of the year.

Coming into 1973, Kaat felt healthy and was so confident that he initially refused to sign the contract the Twins offered him, saying he was holding out for a three-year deal with a substantial raise, from $45,000 to $60,000.2 (Some stories suggested that if he did not sign, he would be a free agent at the end of year and that that was part of his plan.3) The Twins and Kaat eventually settled on a deal that gave him the salary he was looking for but gave him only one year.4

That season, however, did not go the way Kaat expected. While he won his first three starts, he was inconsistent after that and when he had six successive bad outings from late July into August, giving up 28 runs on 40 hits, the Twins waived him with his record at 11-12 with a 4.41 ERA. Three teams claimed him – the Yankees, the Royals, and the White Sox. Twins owner Clark Griffith reportedly tried to work out a deal with the Royals, who offered him 20-year-old George Brett in exchange.5 Because the White Sox had the worst record of the three teams, they had first rights on Kaat and offered only the minimum waiver price of $20,000.6

Although Kaat, as a player with at least 10 years of major-league service, could have vetoed the deal, he accepted it happily, for two reasons. One, Chicago agreed to a contract for 1974 with a substantial raise to $70,000; two, Johnny Sain was the White Sox pitching coach and Kaat wanted to work with him since Sain had been the Twins’ coach during Kaat’s 1966 season.7 (Kaat felt so strongly about Sain that when the Twins fired him after 1966, he wrote an angry letter to Griffith saying that the Twins’ dumping Sain was like “the Green Bay Packers firing Vince Lombardi.”8)

The team Kaat joined was having a season just as disappointing as his. Before Opening Day, several pundits had picked them to contend for the American League West title. The Sporting News said, “The Athletics and the White Sox should run a beautiful race in the A.L. West.”9 Meanwhile, broadcaster Howard Cosell said the White Sox would not only win the division but meet the Pirates in the World Series.”10

Initially, it seemed the predictions would bear out: The White Sox and the Oakland Athletics were neck-and-neck the first three months of the season and the White Sox actually held first place for all of May and much of June. However, when they went 20-33 from July 1 to August 15, they found themselves in fourth place, a dozen games back.

Kaat’s joining the White Sox coincided with a resurgence. He won his first start with them, a three-hit, 4-1 victory over Detroit on August 26, beginning a 13-1 run for Chicago. (While the team also won Kaat’s second start, on September 1, he did not pitch well: Chicago gave him a 4-1 lead over the California Angels by the fourth inning but he surrendered it in a poor fifth when he faced four batters without recording an out before being pulled with the game tied 4-4; the White Sox eventually won 7-5.)

On September 4, the White Sox’ opponent was the Texas Rangers, who came in with the worst record in the AL, 47-90, 32½ games back.

For the Tuesday night game, which drew 5,502 to Comiskey Park, Kaat and Sain decided he should experiment with a no-windup delivery. Kaat said, “I was getting lazy with my arm and wrist so we decided to try the no-windup delivery to quicken it up a little bit.11

The experiment worked: Kaat was strong from the first pitch. He fanned the first two batters, Dave Nelson and Toby Harrah, on his way to setting down the first eight he faced. The Rangers’ ninth hitter, Ken Suarez, broke the string when he managed a third-inning infield single, and Kaat gave up a second hit that inning to Nelson before retiring Harrah on a groundball.

Meanwhile, the White Sox got to Rangers starter Jim Bibby almost immediately, thanks in good part to Bibby’s wildness. After he retired White Sox leadoff man Pat Kelly, he walked the next three and then, with Carlos May batting, unleashed two wild pitches that each brought in a run. After May grounded out, Jorge Orta tripled to left, driving in the third run of the inning.

The first inning was a microcosm of the entire game for Rangers pitching and White Sox hitting. A walk to Kelly and Tony Muser’s double added a run in the second. In the third, May hit a one-out single but was cut down trying to turn it into a double; then Bibby walked the next two, and his night was finished. Jackie Brown came on in relief.

The Rangers bullpen was no better. By the end of the fourth, it was 7-0. In the sixth, the White Sox exploded for six runs on five hits, a walk, and a hit batter. The big blow was a two-run homer by May, which set up a small moment of drama an inning later.

With no outs in the seventh and a runner on, Lloyd Allen, the fourth Rangers hurler of the game, hit May with a pitch. After May went to first, White Sox manager Chuck Tanner lifted him for a pinch-runner and on his way back to the dugout, May deliberately walked across the mound. Umpire John Rice rushed from behind the plate to prevent a fight but May simply asked Allen if he’d hit him on purpose. Allen said, “Naw. I know better than that.”12

Meanwhile, Kaat continued to be sharp. He set the Rangers down in order in the fourth, fifth, and sixth innings, then retired the first two in the seventh before Jim Fregosi singled. But Fregosi was stranded at first when Kaat retired Dick Billings on a fly to center.

Kaat finally ran into a small spot of trouble in the eighth. With one out, Elliott Maddox singled and then, with two outs, Dave Nelson also singled, sending Maddox to third. Nelson stole second, putting two Texas runners in scoring position for the first time that night. But Kaat got Harrah to ground out and the threat was over. When he retired the side in order in the ninth, he had his complete-game shutout. His line: five hits, no runs, no walks, five strikeouts.

The win gave the White Sox their sixth consecutive victory and their 10th in 11 games.

While Kaat had a couple of rough outings from then through the end of the season, he ended up going 4-1 with a 4.22 ERA in his stint that year with the White Sox. Chicago did not sustain the level of play they realized just after Kaat joined them. While the Whie Sox won their next two games, pushing their win streak to eight, they went 6-14 through the rest of the season, finishing fifth, 17 games behind the Oakland A’s.

Kaat spent two more seasons with Chicago and while the team did not finish above .500 in either of those years, Kaat pitched well, winning at least 20 games each year, going a combined 41-27 with a 3.02 ERA. He finally managed to make his third All-Star team, in 1975, but after that season the White Sox traded him to the Philadelphia Phillies.