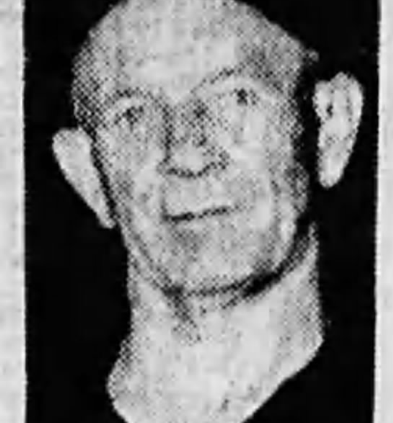 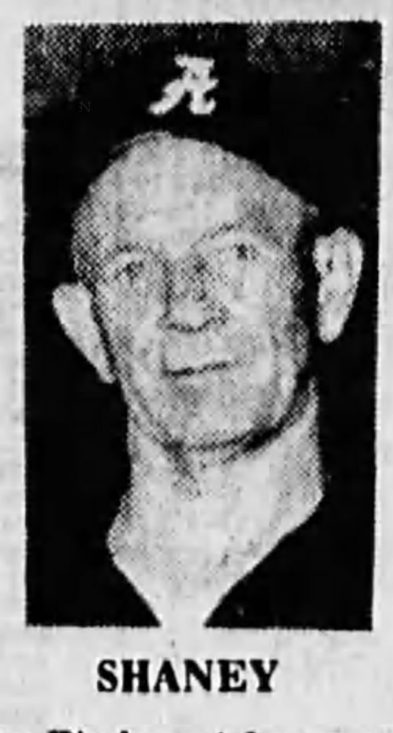 The Asheville (North Carolina) Tourists were in their ninth season as a member of the Class B Tri-State League in 1954.1 They’d won the pennant in 1948, their third season in the league, then lost in the playoffs. But they had the 1954 pennant wrapped up by late August. After play on September 4, manager Ray Hathaway had his Brooklyn Dodgers affiliate Tourists at 84-55, 10½ games ahead of the 72-64 Knoxville Smokies. The Greenville Spinners were another 5½ games back in third place; Spartanburg’s Peaches stood fourth, 18 games out.2

It didn’t matter that the third- and fourth-place teams were both under .500 – the league had only six teams but used a two-round playoff format to keep fans in the ballparks and revenue coming in as long as possible. Asheville would get Greenville in the first round; Knoxville and Spartanburg would play for the other spot in the championship series.

One game remained on the league’s regular season schedule for Sunday, September 5 – Knoxville at Asheville. It meant nothing in the standings, but being an end-of-season Sunday home date, it held good promotional value for Asheville. Mayor Earl W. Eller appeared in a pregame ceremony to announce the Pepsi-Cola Bottling Co. award for “the player chosen most popular by season-long balloting by fans who attended [Tourist] games.”3 The winner was Asheville shortstop Jasper “Jack” Spears, a 24-year-old native of Cheraw, South Carolina. The Asheville Citizen-Times applauded the fans’ choice, opining that Spears “has been the Tourists’ chief spark through most of the season,” and that he “maintained his hitting pace through the Tourists’ slump on late June and early July.”4

And the paper had also given fans notice that “by special agreement with the Knoxville baseball club,” Charles Mars “Struttin’ Bud” Shaney5 “will open the game on the mound against the Smokies.”6 Shaney, 54 years old, was the longtime groundskeeper at McCormick Field, where the Tourists played, kept himself in baseball shape by pitching some batting practice, and had a storied career in Asheville. An Indiana native born in 1900 and a veteran of World War I, he had started his professional career in 1922 in Independence, Kansas. By 1925 he had worked his way east to Class B baseball in Asheville, where “he won 85 games in five seasons [1925-1929], attracting strong crowds with his outstanding ability and over-the-top personality.”7 His primary pitches were a shine ball and spitball and an occasional curve. “He was accused of doctoring the ball with every imaginable device, because his pitches were so effective … but he denies that,” an Asheville writer noted, tongue firmly in cheek.8

Shaney had treated fans to an earlier start – at the end of the 1953 season against the pennant-winning Spartanburg Peaches. He left after five innings with a 5-3 lead. It turned into a no-decision for Shaney when “the roof caved in” for Asheville in the ninth inning with manager Hathaway taking a turn on the mound. Spartanburg scored six runs in the ninth and won, 9-7.9

A better-than-average crowd of 1,119 assembled at McCormick Field on September 5 for another chance to see Shaney pitch.10 They got “their biggest kick,” though, before his first pitch when Hathaway’s four-year-old son, “dressed in baseball garb and wearing his daddy’s cap, strutted out to the plate, introduced himself, shook hands all around, and proceeded to give the ground rules to Knoxville’s Manager Ken Polivka and the arbiters.”11

When the on-field action started and true to expectations, Shaney “had not speed, but possessed considerable ‘stuff.’”12 The stuff got him through the top of the first inning; the Tourists gave him an early cushion in their half against Knoxville’s big (6-foot-4, 200-pound) righty starter Dean Franks.

After center fielder Joe Kwiatkowski made an out, left fielder Ken Cox and Spears both singled. Cleanup man Bob Reid, the first baseman, singled to drive in Cox, and third baseman Oscar Sierra, the league RBI leader, plated Spears with another single. Franks made it through the rest of the inning without further damage, but it was 2-0 after an inning of play.

That was all Shaney needed. Over five innings he scattered four Knoxville hits – two harmless singles, a triple, and a double, but well-spaced – and left with the 2-0 lead. Hathaway let Shaney hit for himself in the bottom of the fifth before excusing him; even at the age of 54 Shaney legged out a single on a bloop in front of the plate that the Knoxville catcher, Wilbur McConnell, was – possibly intentionally – slow in fielding. Shaney was quickly erased when the next batter, Kwiatkowski, lined back to Franks, who doubled Shaney off as he tried to scramble back to first base.13

Seeking redemption for failing to hold Shaney’s lead the year before, Hathaway, 37, again took over.14 The Branch Rickey protégé had pitched a total of nine innings in four games for the Dodgers in the early part of the 1945 season before turning to managing.15 He closed out the Smokies in the sixth. And Asheville obliged with two runs, increasing the lead to 4-0 in the bottom half. Cox got things started again with his third single of the game. Spears doubled him home, and after Reid made an out, Sierra delivered another run-scoring single, pushing his league RBI lead to 102.

Both Hathaway and Franks made quick work of their seventh, eighth, and ninth innings. Over his four innings, Hathaway allowed only one baserunner, on a walk. Franks had pitched reasonably well, but the clustered hits from the heart of Asheville’s order in the first and sixth innings cost him the loss. As with his start in the prior season, Shaney left with the lead. This time, as Hathaway closed things out, Shaney picked up the 223rd – and last – win of his 22-year minor-league career.

The Asheville Citizen-Times commented on the frisky pace of play. “Shaney appeared to be the fastest-working pitcher to show in McCormick Field this year. Hathaway didn’t slow the pace in his four innings and together, they hurled the game in the space of one hour and 18½ minutes. This definitely is a McCormick Field record for post-war play.”16

But the Tourists’ success failed to survive the playoffs. Both Knoxville and Asheville advanced through the first round to meet in the best-of-five 1954 championship series. There, Knoxville eliminated the Tourists, three games to one. The determinative fourth game, played September 15 in Knoxville, was a tight 2-1 affair in 12 innings. Knoxville pulled out the win on a bases-loaded walk issued by Mauriello – his 10th of the game against 14 strikeouts.17

Reduced to four teams – Asheville, Greenville, Spartanburg, and Knoxville – the Tri-State League struggled through the 1955 season, then folded. Asheville was without professional baseball for three seasons and McCormick Field was used for stock car races.18 But in 1959 the Tourists became part of a reorganized and now Class A circuit – the South Atlantic (Sally) League, as an affiliate of the Philadelphia Phillies. McCormick Field returned to the purpose for which it had been built.19 For the 1961 season the affiliation changed to the Pittsburgh Pirates – and Asheville fan favorite Hathaway was back at the helm.20

In addition to the sources cited in the Notes, I used the Baseball-Reference.com and Retrosheet.org websites for general information. I also used the B-R Minor League Encyclopedia for data on the 1954 Asheville Tourists and the 1954 Knoxville Smokies. I found Stats.com a useful resource for details on the 1954 Tri-State League. The broad coverage of the Tourists in 1954 by the Asheville Citizen-Times, accessed through Newspapers.com, was essential to this account.

1 The 1954 Tri-State League was so named because the six teams were based in three contiguous states in the Southeast, with the concentration in South Carolina. The Greenville Spinners, Spartanburg Peaches, Rock Hill Chiefs, and Anderson Rebels represented the Palmetto State. Asheville was the sole league outpost in North Carolina; the Knoxville Smokies represented Tennessee.

4 “Spears Wins Popular Player Contest; Gets Huge Trophy,” Asheville Citizen-Times, September 6, 1954: 16. Spears led the 1954 Tri-State League in hits with 188 and finished second (.329) in the league batting race. Spears was promoted to St. Paul of the American Association (Triple-A) for the 1955 season. Except for part of the 1956 season at Double-A Fort Worth in the Texas League, he finished his career at the top minor-league level in the Dodgers system but never reached the majors. He was out of baseball after the 1959 season at age 29.

5 The nickname derived from a broken leg suffered while playing high-school football. “The leg was not set properly, causing Shaney to walk with a hitch that resembled a strut.” Bill Ballew, A History of Professional Baseball in Asheville (Charleston, South Carolina: The History Press, 2007), 39.

7 Ballew, 38-39. Shaney’s last season taking a regular turn in the mound was with the 1942 Hickory Rebels of the Class D North Carolina State League.

14 The average age of the players in the 1954 Tri-State League was 25. Knoxville helped raise the average with four players, George Bradshaw, Al LaMacchia, Pat McGlothin, and Polivka, who had played in the majors prior to 1954. None of the other Smokies advanced to the majors. From the Asheville roster, only Hathaway, already nine years removed from his stint with Brooklyn, and pitcher Ralph Mauriello, then 19, made it.

19 As of 2021, with Asheville affiliated with the Houston Astros in the Southern Division of the High-A East League, baseball has been played at McCormick Field continuously since 1959 – with the exception of 2020, when the global COVID-19 pandemic canceled all minor-league baseball in the US.