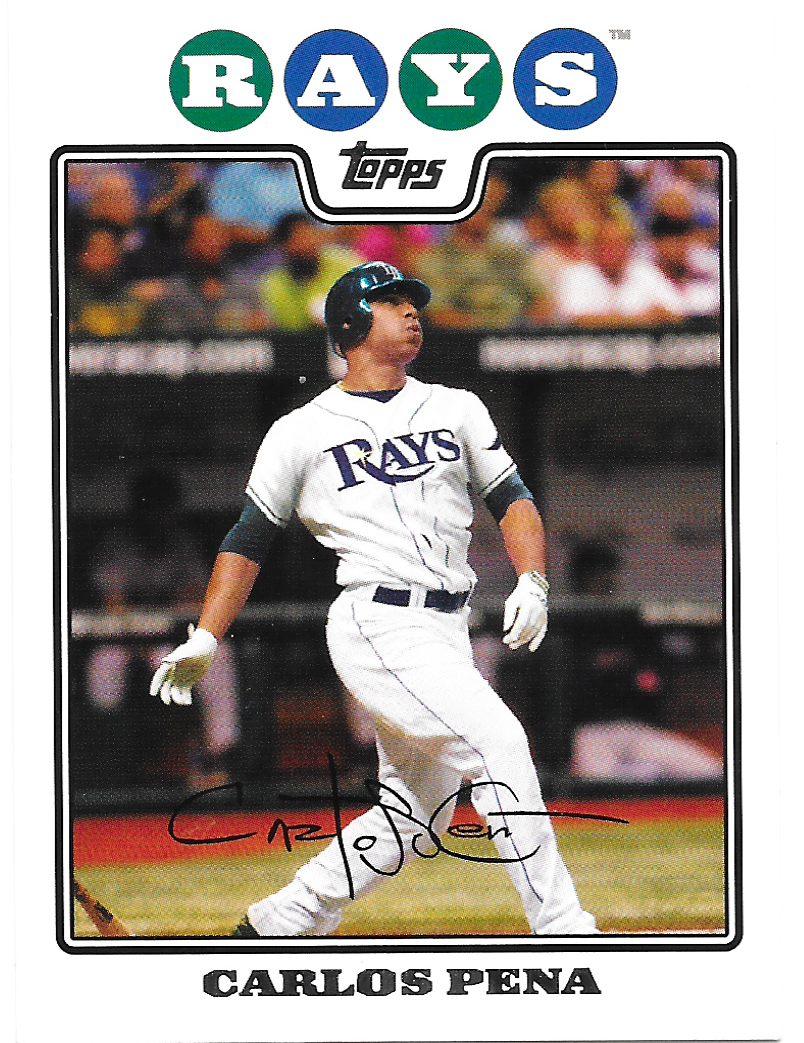 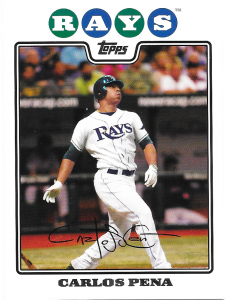 “This is awesome. It was a great game. It’s one of the most fun I’ve had in a day at a baseball field.”1 – Carlos Peña

Peña and the Tampa Bay Devil Rays had every reason to feel optimistic after their 17-2 blowout victory over the hopeless Baltimore Orioles. For Peña, it was a rocky road to get to this moment. After being released by the Detroit Tigers in spring training in March 2006, Peña signed a minor-league contract with the New York Yankees, where he played with their Triple-A affiliate Columbus Clippers. A clause in his contract allowed him to opt out in August, which Peña did. He signed a minor-league deal with the Boston Red Sox.

After playing 11 games with the Triple-A Pawtucket Red Sox, Peña was called up and played 18 games with the Sox. Peña hit one home run, a walkoff vs. the Chicago White Sox.

The Devil Rays signed Peña as a free agent in 2007, which became a pivotal season for both Peña and the Devil Rays. For Peña, 2007 was the season he finally lived up to the promise of being MLBs #11 prospect six years earlier. He finished the season with 46 home runs, second in the AL behind only Alex Rodriguez. For the team, it was the final season that the Tampa Bay baseball club would be known as the Devil Rays as they would drop the Devil from their moniker in 2008. After 10 years of being the doormat of the American League East, the newly christened “Rays” won the 2008 AL pennant.

The Orioles’ roller-coaster season had gone off the rails by September. By June 18, Baltimore had lost eight games in a row, and 13 of its last 15 games, falling into last place in the AL East with a 29-40 record. The losing ultimately cost manager Sam Perlozzo his job, replaced by bullpen coach and former AAA Ottawa Lynx manager Dave Trembley. Even though Trembley had no prior experience at the major-league level, including as a player, coach, or manager, the move seemed to pay off. The Orioles went 29-25, good enough that on August 22, the front office removed Trembley’s “interim” tag and extended his contract through the 2008 season. The decision was rewarded that evening with the worst loss in team history, a 30-3 shellacking to the Texas Rangers. It was the beginning of a nine-game losing streak and 12 of their last 13 games going into tonight’s action.

Taking the hill for the Devil Rays was Andy Sonnanstine who after surrendering singles to leadoff hitter Freddie Bynum and Corey Patterson, struck out Nick Markakis and got former MVP Miguel Tejada to ground into an inning-ending double play.

Orioles rookie Radhames Liz made his third major-league start. His previous starts were not exactly quality starts. In his major-league debut, he gave up five runs in six innings in an 8-1 loss to the Twins and he allowed two runs in three innings (no decision) in a 9-8 win over the Red Sox. Rays leadoff hitter Akinori Iwamura worked a full count before smacking a shot back to the mound which Liz couldn’t handle resulting in a leadoff single. After Peña walked, Melvin Upton Jr. smacked a double to left scoring Iwamura and sending Peña to third. Rookie Delmon Young’s ground out to short scored Peña and sent Upton to third. Liz struck out Brendan Harris to leave Upton stranded at third and end the Tampa Bay threat.

With one out in the bottom of the second, four consecutive singles by Dioner Navarro, Josh Wilson, Iwamura, and All-Star left fielder Carl Crawford extended the Devil Rays lead to 3-0. Peña’s sacrifice fly to deep right-center field scored Wilson and gave the Devil Rays a 4-0 lead. A walk to Upton loaded the bases for Tampa Bay and ended Radhames’ evening. Rob Bell got Young to pop out second baseman Bynum to end the second inning. Liz’s line was 1 2/3 innings pitched, four earned runs, six hits, two walks, and one strikeout. Eight of the 13 batters Liz faced reached base (.615 OBP).

Harris led off the bottom of the third with a double to left field. Bell’s wild pitch allowed Harris to advance to third and score easily on Navarro’s single. Wilson’s single to center gave Tampa Bay runners on first and second with one out. Iwamura’s groundout to Bell advanced the runners into scoring position with two outs. Bell escaped further damage by getting Crawford to ground out.

Peña led off the bottom of the fourth with a walk and advanced to second thanks to Upton’s infield single. Young took Bell’s 1-2 offering over the fence in deep left-center field for a three-run homer giving the Devil Rays an 8-0 lead. Harris crushed Bell’s next pitch for a long home run to center field extending the Tampa Bay lead to 9-0. Jonny Gomes ripped a single to left, the fourth consecutive hit and fifth consecutive baserunner allowed by Bell this inning; there were still no outs.

Trembley gave Bell the hook and replaced him with Fernando Cabrera. Paul Bako allowed Cabrera’s third pitch to get past him moving Gomes to second. Navarro walked to put runners on first and second. Cabrera struck out Wilson for the first out of the inning and got Iwamura to fly out to center for the second out. A Crawford single to left loaded the bases for Peña, who ripped the second pitch he saw from Cabrera over the right-field wall for a grand slam and gave the Devil Rays a 13-0 lead. It was Peña’s fifth career grand slam and second of the season. Seven of the Tampa Bay starting nine scored in the bottom of the fourth with Pena scoring twice.

Brian Burres replaced Cabrera in the bottom of the sixth and allowed a leadoff double to Wilson who scored on Crawford’s double. Peña followed with his second home run of the game extending the Tampa Bay lead to 16-2 This home run gave Peña a team-record seven RBIs for the game. Gomes’ solo shot in the seventh finished the scoring at 17-2, the largest margin of victory in team history. The Devil Rays set team records for most total bases in a game with 41 Tampa had won 10 out of its last 13 games and won their last four series.

This beating was the Orioles 13 loss in their last 15 games. In 10 of those losses, Baltimore pitching gave up eight runs or more, and in five of those losses, the other team scored at least 10 runs. “We’re trying to do the best we can,” Trembley said. “But it’s just not working. The big innings are way too frequent.”2