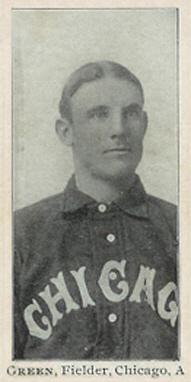 “The sun is right bang in your eyes all the time,” said right fielder Dusty Miller of the Cincinnati Reds. “It takes a lot of figuring to get under them [fly balls] properly.”1 Playing in right field, the “sun field,” at Cincinnati’s League Park was difficult even “if you are protected … by smoked glasses,” he said.2 The sun was especially troublesome late in the season, as Chicago Orphans right fielder Danny Green learned on Tuesday, September 6, 1898. The Orphans were in Cincinnati for the first game of a three-game series. Green was an impressive 21-year-old rookie, a protégé of Orphans manager Tom Burns.3 “Green is a gem … a batter, a fielder and a thief par excellence,” Sporting Life wrote.4

The starting pitchers were Jimmy Callahan for the Orphans and Frank Dwyer for the Reds. The first inning was scoreless. In the top of the second, Bill Everitt singled off Dwyer, and Big Bill Lange followed with a mammoth home run to left field, the first ball hit over the fence at League Park during the 1898 season.5 Sporting Life said it was “the longest hit ever made on the local grounds.”6 After Lange’s tremendous blast, Bill Dahlen, the Orphans’ captain and shortstop, began taunting Dwyer from the coaching line. Dwyer grew irritated and shouted back at him.7 The Orphans scored another run in the inning, on a walk and two singles.

Two Reds were on base in the bottom of the second inning when Chicago third baseman Barry McCormick “grabbed” a “vicious bounder” off the bat of Heinie Peitz and started a slick double play.8 McCormick was a local kid who had excelled on Cincinnati sandlots.9

Dwyer hit Dahlen with a pitch in the top of the third inning. “Dahlen accused Dwyer of doing it intentionally. Dwyer did not apologize, and more bitter words followed.”10 In the bottom of the inning, with the bases loaded, McCormick knocked down Bid McPhee’s “fierce liner” and started another double play; the Chicago Tribune called it “the play of the game.”11

The Orphans went to work against Dwyer in the top of the fourth inning. Callahan tripled with two men on, and “Green doubled and stretched the hit to third by sliding the ball out of [third baseman Charlie] Irwin’s hands.”12 McCormick then doubled, and the Orphans led 7-0. Dwyer took his frustrations out on Dahlen, who barely dodged the first pitch from Dwyer, aimed at his head. The next pitch plunked him in the ribs, “very close to the heart.”13 Dahlen took his base as he and Dwyer “kept up a cross fire of words.”14

Miller led off the bottom of the fourth inning with a triple to “the right-field embankment.”15 Green, who was not wearing sunglasses, lost it in the sun. After a walk and a single, Dwyer came to bat and lifted a fly ball to right field. Green lost that one in the sun, too, and Dwyer had an easy triple. Algie McBride knocked in Dwyer with a single, and the score was 7-4. The 5,346 spectators were “on their feet cheering.”16

Southpaw Billy Dammann replaced Dwyer in the top of the fifth inning and quieted the Chicago bats. The Reds continued their rally in the bottom of the inning, with help from Green. McPhee lined the ball toward Green, who misplayed it, and McPhee had a triple. Miller bounced a ball past Dahlen at short, sending McPhee home. Tommy Corcoran drove the ball to right field, past the helpless Green, for another Cincinnati triple. Irwin grounded sharply to McCormick, “who by a marvelous stop and throw nailed Corcoran at the plate.”17 Dammann beat out an infield hit, and he and Irwin scored when Jimmy Ryan dropped McBride’s fly ball in left field. The Reds were now ahead, 8-7, and the fans were delirious.

With good pitching from Dammann and Walt Woods, a 23-year-old rookie who relieved Callahan, neither team scored in the next three innings. “McCormick made one of the greatest plays of the year in the seventh and gets no credit. He sprang back of third, grabbed in Irwin’s vicious hit with one hand, and by a marvelous throw came within an inch of getting his man.”18

McCormick singled to lead off the top of the ninth inning. Dammann was reluctant to pitch to Lange and walked him intentionally. With two outs, Jim Connor lined a single to center field, and McCormick darted home with the tying run.

McPhee drew a base on balls to start the bottom of the ninth. Woods pounced on Miller’s bunt and fired to second base for a force out. Corcoran flied out to Lange in center field, but Irwin followed with a double to center. Miller scored from first, sliding home just ahead of Lange’s throw to the plate. The final score was Cincinnati 9, Chicago 8.

The Chicago Inter Ocean pinned the loss on Green.19 The Chicago Tribune said he was “guiltless,” but noted that “easy flies rained around the youngster as he stood dazzled in the sun, and every fly driven out to right was transformed into a triple.”20 Manager Burns defended him:

“People must not judge Green by his work this afternoon. He knows nothing about playing the sun field. Again he was badly handicapped by having to play without glasses. He had counted on wearing Jimmy Ryan’s spectacles, but the latter … left them in his other uniform. I am going to have him fitted with a pair of colored spectacles for tomorrow, and I think you will see a great deal better work.”21

The official scorer took pity on Green and did not charge him with an error.22 In the second and third games of the series, Burns put Ryan in right field and moved Green to left field.23