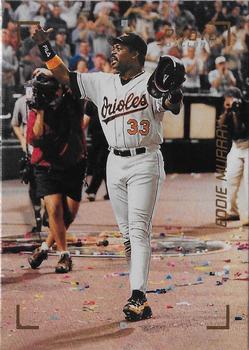 Excitement filled the Baltimore air in early September as the Orioles fought for a playoff spot. They had last played postseason baseball in 1983, when they defeated the Philadelphia Phillies in the World Series. During the ensuing 12 seasons, the Orioles finished above .500 six times but consistently missed the playoffs. After an August in which they shaved six games off the AL East-leading New York Yankees’ lead, the Orioles tussled with the Chicago White Sox, Seattle Mariners, and Boston Red Sox for the lone wild-card slot. Entering September, the Orioles were tied with Chicago for the spot.1

Baltimore was an offensive powerhouse, breaking their season record of 214 home runs with still a month remaining in the season. Brady Anderson exceeded the 40-homer plateau, Rafael Palmeiro passed number 30, and five additional Orioles topped 20. During the summer, Baltimore added more power by acquiring veteran Eddie Murray. Murray started his career with Baltimore, playing first base from 1977 to 1988. After stints with the Los Angeles Dodgers, New York Mets, and Cleveland Indians, he returned to Baltimore on July 21, 1996, when Cleveland traded him to the Orioles for Kent Mercker and cash. Baltimore shortstop Cal Ripken Jr. praised Murray’s return: “To me, he’s a positive on the field and in the clubhouse. … To me, he carries himself very professionally and does his job.”2 The trade was unpopular among Cleveland players, with Kenny Lofton echoing accolades: “Eddie Murray means so much to this team. Everyone here was looking forward to seeing him hit his 500th homer, and see him do it in Cleveland. I guess Baltimore’s going to get that thrill now.”3

Murray slumped during late August, hitting career homer number 498 on August 16 at Oakland, then getting only eight hits and zero homers in 42 at-bats over the next two weeks. He insisted he wasn’t pressing to reach the notable milestone: “I haven’t really been trying to hit homers. I might’ve had pitches to hit, and I missed them. … When you’re trying to hit them, you don’t.”4 Murray hit round-tripper number 499 on August 30 at Seattle. Baltimore had four more road matchups before a seven-game homestand.

Exactly one year after Ripken broke Lou Gehrig’s consecutive-games streak in Baltimore, the Orioles opened a four-game series against the 50-90 Detroit Tigers. The Tigers struggled all season, posting 9-18 April and 4-23 May records to firmly plant themselves in the AL East cellar. The offense was led by outfielder Bobby Higginson and the pitching staff by Omar Olivares. Heading into their Baltimore series, Detroit’s leadership focused on the positives, with team President John McHale commenting, “The team looks a lot better than it did in June.”5

Baltimore manager Davey Johnson chose David Wells for the hill. The veteran was spending his first season with the Orioles; on December 26, 1995, Baltimore had sent Curtis Goodwin and minor-leaguer Trovin Waldez to Cincinnati in exchange for Wells.6 Halfway through his career, Wells fired a mid-90s fastball complemented with a big curve or changeup when needed, though he was prone to allowing homers.7

Detroit manager Buddy Bell selected Felipe Lira to face Baltimore. The youngster was pitching in his second major-league season, and was 6-12 with a 5.35 ERA over 175 innings. He joined Detroit’s rotation halfway through his rookie season and became their most reliable starter during a challenging 1996 season. Lira’s effectiveness relied more on movement and changing pitch speeds than outright velocity. His hard-cutting fastball ran away from left-handed hitters, though he occasionally struggled with his command.8 Entering this contest, Lira had lost his last five decisions.

The game was scheduled for a 7:35 P.M. start, but a 2-hour and 20-minute rain delay caused by Hurricane Fran meant the game didn’t begin until just before 10 P.M. Wells was ready for the matchup; he struck out Detroit leadoff hitter Kimera Bartee and Mark Lewis looking, then struck out Travis Fryman swinging. In the bottom half, Lira retired Baltimore in order.

The Tigers collected the game’s first hit when Ruben Sierra delivered a second-inning infield single; after Tony Clark struck out, the inning ended on a 5-4-3 double play. The Orioles scored first when Palmeiro homered on a 2-and-0 offering in their half of the inning. Murray, who was lifetime 0-for-7 against Lira, made his first appearance with two outs and walked on five pitches. B.J. Surhoff singled as Baltimore threatened to build upon its lead, but Chris Hoiles grounded into a fielder’s choice as Lira escaped the jam.

In the third inning, Phil Nevin evened the score when his blast reached the left-field seats. Wells experienced trouble when Phil Hiatt and Brad Ausmus singled and Bartee’s sacrifice moved them into scoring position. Hiatt scored on Lewis’s groundout. Fryman struck out, but now Detroit led 2-1. In the bottom half, Anderson was hit and took third on Todd Zeile’s double to left. Alomar flied out to deep center; Anderson scored and Zeile moved to third. Neither Palmeiro nor Bonilla hit the ball out of the infield as the game remained tied 2-2.

Sierra started the fourth inning by hitting a single to right field. He advanced to second when Melvin Nieves grounded out, then scored on Nevin’s single to left as the Tigers inched ahead, 3-2. In the bottom half, Murray appeared for the second time and grounded out on a spectacular play by Tigers shortstop Fryman.9 After the initial flurry of long balls in the early innings, the teams each managed one baserunner midway through the seventh inning.

Ripken started the bottom of the seventh with an infield groundout. Approaching midnight and with about 25,000 still present, Murray stood in the batter’s box for his third appearance. On the first pitch, Murray launched Lira’s split-fingered fastball into the right-field bleachers for career home run number 500. Murray joined an exclusive club with that clout, as only Hank Aaron, Willie Mays, and Murray were 500-homer, 3,000-hit club members. Murray received an 8½-minute ovation and multiple curtain calls as the crowd celebrated his achievement. Baltimore’s front office was prepared for the occasion with streamers, video clips, and scoreboard graphics; however, Murray’s teammates were completely taken off guard when the moment actually happened and rushed to greet their slugger at home plate.10 The quiet superstar clearly appreciated the celebration, shaking hands with several fans and friends, commenting afterward, “It was nice to see everybody get fired about it.”11 Once the fanfare settled down, a groundout, walk, and strikeout ended the inning with a 3-3 score after seven innings.

Leadoff hitter Higginson, pinch-hitting for Bartee, immediately quieted the enthusiastic crowd by depositing a pitch by Alan Mills into the bleachers as Detroit regained the lead. Mills retired the next three batters and the Orioles needed a rally. Baltimore responded with two singles surrounding a strikeout, bringing Bobby Bonilla up with one out and runners on the corners. Bonilla’s sacrifice fly scored Zeile and the game was tied, 4-4. Ripken ended the threat by flying out.

Orioles closer Randy Myers relieved Mills for the ninth inning and allowed no runs. Murray faced José Lima to start the bottom half as the crowd cheered for a dramatic ending. Murray lined out, Surhoff struck out, Hoiles singled (then was replaced by pinch-runner Manny Alexander), and Anderson walked as Baltimore threatened again with runners on first and second. Zeile hit into a fielder’s choice, and the game headed into extra innings.

In the 10th inning, both teams placed a runner at first who advanced no further. During the next frame, each team went three up and three down as the clock moved past 1 A.M. In the 12th inning, Detroit pressured Orioles reliever Terry Mathews with two consecutive one-out walks. Mathews rallied to strike out Ausmus on five pitches. Higginson foiled Baltimore again by driving in Nevin on a center-field single. Curtis Pride was caught stealing home in a daring attempt as the Tigers attempted to pad their lead. In the bottom half, John Cummings, pitching his third inning, retired Anderson and Zeile, and then walked Alomar. Palmeiro popped out to second on Cummings’s first pitch, and Detroit emerged with a 5-4 victory.

The Orioles finished 88-74, second in the AL East and as the wild-card winner. They defeated the Indians in the AL Division Series before losing to the Yankees in the Championship Series. Murray completed the 1996 season with Baltimore, hitting .260 with 22 homers and 79 RBIs, and finished his career the following season, splitting time between the Anaheim Angels and the LA Dodgers. Over his 21-year career, the switch-hitting Murray played in 3,026 games and delivered 3,255 hits, including 504 homers, and 1,917 RBIs. Murray was praised for his consistency; he often appears on “Best of the 1980s” lists at first base.12 He appeared defensively at first base 2,413 times, the most in baseball history. Murray was elected to the National Baseball Hall of Fame in 2003, receiving 85.3 percent of the votes, in his first year of eligibility.13

8 “Felipe Lira,” in Dewan and Zminda.