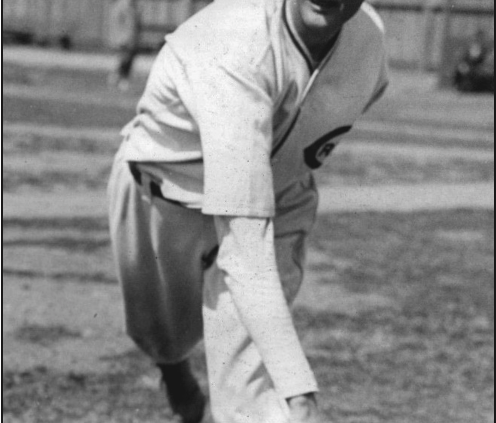 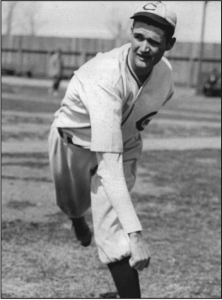 St. Louis Terriers pitcher Dave Davenport nearly single-handedly brought his team a pennant with several outstanding performances in the final month of the 1915 Federal League season. His best outing was a no-hitter on September 7 against the Chicago Whales, another title contender. It turned out to be the gem of five impressive contests in which Davenport yielded three hits or less on his way to accounting for eight Terriers wins during a tight race for the pennant.

The Terriers had finished last in the Federal League’s first season as a major-league the year before. The first two months of the 1915 season appeared to have the team on a path for similar results. Then the Terriers put together a couple of winning streaks in June and were tied for first place by end of the month.

Despite its 20-8 record in June, St. Louis wasn’t able to put much separation between itself and other teams. In fact, for most of the rest of the season, five of the eight teams in the upstart league were in contention for first place.

Twenty-four-year-old Davenport was in only his second professional campaign. After playing a season with San Antonio in the Texas League in 1913, he began the next year with the Cincinnati Reds. He pitched in 10 games for the Reds before he and outfielder Armando Marsans switched to the Federal League in mid-June of 1914. They were among many players to openly “jump” from existing contracts, using loopholes and other excuses to better themselves with the new league.1 Davenport finished his first season with the Terriers with an 8-13 record and a 3.46 ERA.

In 1915 he led a staff that included holdovers Bob Groom, Doc Crandall, Doc Watson, and newly acquired veteran Eddie Plank, who had been released by the Philadelphia A’s. In his best outing through July, Davenport lost a one-hitter in the second game of a doubleheader on July 31 against the Buffalo Blues. He had won the first game of the twin bill with a four-hit shutout.

With only one game separating St. Louis and Chicago, they faced each other in a doubleheader in St. Louis on September 7. A crowd of 1,500 showed up for the second twin bill in two days.2 Terriers manager Fielder Jones gave Davenport his third start of the month in the first game. On one day’s rest, Davenport faced Whales left-hander Ad Brennan.

The Terriers bunched three hits in the fourth inning off Brennan. With one out, Babe Borton singled to left and scored on a double to the left-field fence by Jimmy Walsh. Walsh went to third when shortstop Mickey Doolin threw out Grover Hartley. Ernie Johnson singled to left to score Walsh. Davenport ended the inning by forcing Johnson.

The Terriers got their final run in the eighth inning. Jack Tobin beat out a bunt to Brennan, and he was forced at second by Bobby Vaughn. Vaughn stole second and advanced to third on Ward Miller’s out (Brennan to first baseman Fred Beck). Brennan threw a wild pitch to the grandstand, and Vaughn scored the third and final run.3

Only four balls were hit out of the infield by the Whales. Davenport’s effectiveness was attributed to “curves and a deceptive fast one which had a hop on it that either made them pop up easy flies or roll easy grounders to the infield.”4

Davenport walked two batters, while a third reached when Tex Wisterzil bunted and was safe on an overthrow by catcher Hartley. None of the three runners were able to advance to second.

Davenport struck out three batters en route to his 17th win of the season. Brennan gave up eight hits while striking out only one, in absorbing his ninth loss of the season against two victories.

Chicago won the second game of the doubleheader, 3-2. At the end of the day, St. Louis had edged ahead of New York and Chicago in the standings.

Davenport went on a spree of low-hit games with his next starts. He followed the no-hitter with two-hitters on September 10 and 17 and three-hitters on September 22 and 24. Altogether he had 12 starts among 15 total appearances that month, as he posted an 8-3 record. Yet he wasn’t the only workhorse on the staff during the September-October stretch. Doc Crandall, who played shortstop when he wasn’t pitching, made seven starts among 12 total appearances. Thirty-nine-year-old Plank also got the starting nod seven times among 12 appearances and recorded his 300th career victory on September 11.

Chicago, St. Louis, and Pittsburgh were separated by no more than 4½ games during the last month of the season. Going into the last day on October 3, only .005 percentage points separated them. Pittsburgh split a doubleheader with Chicago, while St. Louis defeated Kansas City. Even though St. Louis made a valiant effort in September with a 20-10 record, the Terriers came up .001 percentage point short of Chicago, which claimed the pennant by compiling an 86-66 record to St. Louis’s 87-67. The Terriers provided most of the excitement in the Gateway City for the season, as the Cardinals and Browns both finished in sixth place.

Davenport led the Federal League in starts (46), complete games (30), shutouts (10), innings pitched (392⅔), and strikeouts (229). His final mark was 22-18 with a 2.20 ERA. His name is often omitted from the all-time list of major-league no-hit pitchers, because the Federal League hasn’t always been fully acknowledged as a major league.

There were two other no-hitters in the Federal League in 1915: Frank Allen of Pittsburgh on April 24; and Alex Main of Kansas City on August 16.

It was the final season of the Federal League. Terriers owner Phil Ball was allowed to buy the St. Louis Browns of the American League and merged the two rosters. Whales owner Charles Weeghman was allowed to buy the Chicago Colts franchise of the National League.5 Many of the Federal League players found their way back to the American League or National League. Davenport wound up going to the Browns, where he played four more major-league seasons.

3 Sam Weller, “No Hits, No Runs Off Davenport; Whales Divide,” Chicago Tribune, September 8, 1915: 11. The box scores in the Chicago Tribune and Baseball-Reference.com have a discrepancy with the newspaper’s game account. They indicate Tobin (not Vaughn) scored the run in the eighth inning.