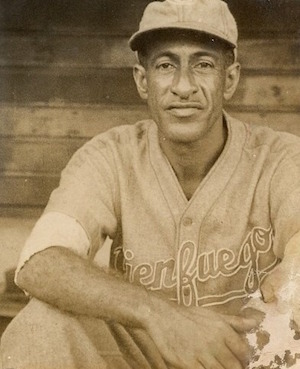 The Havana Red Sox baseball team arrived in Miami in March of 1929. The Red Sox, who had just finished playing winter ball in Cuba, were stopping off in Florida to tune up for their coming barnstorming tour of the United States. The eight games they played in Miami before they embarked on the trip drew more than 93,000 fans.

Starting out in the Deep South, the Red Sox worked their way northward under the leadership of Syd Pollock, the club’s new owner and promoter. Pollock was a New York businessman who made his first foray into baseball ownership in 1920 when he acquired the Westchester Blue Sox. By 1922 he started hiring vaudeville performers to entertain crowds during games. Pollock would own and operate a variety of traveling teams featuring African-American and Cuban players during his five decades in baseball. As the owner of the Indianapolis Clowns, he signed 18-year-old Henry Aaron to his first professional baseball contract.

Pollock purchased the Havana Red Sox from player-owner Ramiro Ramirez after the 1928 season. Ramirez stayed on with Pollock as the team’s general manager, field manager and outfielder/pitcher. In Shreveport, Louisiana, Pollock’s Red Sox played a seven-game series against the Black Sports from the Texas-Oklahoma-Louisiana League. The total attendance for these contests was around 84,500.

At one point during their 1929 US barnstorming tour, the Havana Red Sox put together a 21-game winning streak. In early September the Baltimore Sun reported that the Cubans had racked up 108 victories.

On September 7, 1929, the Red Sox squared off against Joe Cambria’s Bugle Coat and Apron Laundry team at Oriole Park in Baltimore. Cambria was a former minor-league player whose professional baseball career had been cut short by a broken leg in 1912. By 1929 Cambria owned one of Maryland’s largest laundry services, which in turn financed his baseball endeavors. He built Bugle Field in East Baltimore for his baseball team to use as its home grounds.

Cambria would go on to own and manage a number of minor-league franchises. His greatest claim to fame was as a scout for the Washington Senators and for a brief time the Minnesota Twins. In addition to signing players like Babe Phelps, Early Wynn, and Mickey Vernon, Cambria was responsible for bringing scores of Cuban players to America to play professional baseball.

In order to accommodate the large crowd that was expected to come out to see the Havana Red Sox, Cambria rented Oriole Park, home to the Baltimore Orioles of the International League, which had more seats than Bugle Field. Cambria’s Bugle team was a semipro aggregation made up of former professional players as well as a few local standouts with hopes of climbing the rungs of Organized Baseball. Chief Bender, Allan Russell, Walter Beall, and Lefty George were some of the major leaguers who donned a Bugle uniform in 1929. In addition to taking on a heavy schedule against independent teams, the Buglers played in the Baltimore Interclub League.

The pregame festivities at Oriole Park started out with the Red Sox coming onto the field wearing their navy blue uniforms with red trim and lettering and performing their famous rendition of shadowball, a synchronized pantomime in which they went through their infield and outfield drills without using a baseball. The Cubans engaged in their on-field chatter in Spanish during this dazzling presentation while singing their signature song, “Whoopee.” The Havana team was made up of some of the most talented players from Cuba. In addition to their skills on the diamond, they were entertainers in the same vein as the latter-day Harlem Globetrotters basketball team.

Bugle manager Bill Callahan sent Joe Atkinson to the mound in the first game. Havana manager Ramirez chose Luis “Lefty” Tiant as his starter. The talented southpaw (father of later major leaguer Luis Tiant) was a screwball pitcher with a pronounced herky-jerky delivery. Adept at changing speeds, he was known as a fierce competitor who wasn’t averse to using the brushback pitch to intimidate batters. Tiant, advertised as the Lefty Grove of Cuba, had a great pickoff move to first base, which made him difficult to run on. Pollock said Tiant was the best pitcher he ever saw. It was reported that Tiant’s salary was equal to that of some of the better major-league pitchers of the day. His contract with Pollock also specified that he pitch only two games a week. A contemporary newspaper account shows Tiant with a 28-5 record for the Red Sox in 1928.1

The initial contest between the Buglers and the Red Sox started out as a pitchers’ duel with both tossers holding the opposition scoreless for the first two frames. Cambria’s charges, batting in the visitors’ slot in the opener, broke the ice in the top of the third with a four-run outburst. The Buglers put five more runs on the board in the fifth in what would be Tiant’s last inning. Usenteni took over in the top of the sixth. He finished out the game, allowing three more Bugle tallies. The Red Sox finally got to Atkinson in the sixth and seventh, scoring a pair in each inning. That was the extent of the Cubans’ offense as the game ended with the Buglers on top, 12-4.

Bugle leadoff batter Jimmy Lyston connected for three singles in five trips to the plate. Lyston began his professional baseball career with Jack Dunn’s Orioles in 1921. Former Newark Bear Albert “Whitey” Swingler was 4-for-5 with a double for the triumphant Cambria nine. Backstop Earl Monroe contributed a triple to the Bugle win. Monroe caught in the Blue Ridge League from 1922 to 1924. Jake Miller chipped in with two base knocks. Miller played with the Pittsburgh Pirates in 1922. Winning hurler Joe Atkinson scattered nine hits while fanning five.

In the second game, Red Sox manager Ramirez gave the starting assignment to pitcher Emilio Sarda. Sarda had tossed a no-hitter a few weeks earlier in Chillicothe, Ohio. Bugle skipper Callahan countered with former Oriole Joe Lance. The Red Sox scored twice in the first stanza, then cruised to a 5-1 victory. The game was called after the seventh inning because of darkness. Sarda allowed three hits while walking three and striking out four. Second baseman Tomas “Pipo” de la Noval won the hitting laurels in the nightcap, going 3-for-4 with a triple and a homer. Basilio “Home Run” Cueria caught the second game. The powerful right-handed swinger smacked a double and a triple for the victorious Cuban club. Cueria had already notched 35 round-trippers during the US tour.

Over the next few weeks the Buglers were in a tight race for the Interclub League pennant. They eventually finished in second place behind the Baltimore City Police team. Cambria’s charges continued to play deep into October against local nines, including the 1929 ECL champion Baltimore Black Sox. For the Havana Red Sox, it was back on the team bus and on to the next town.

Keenan, Jimmy. The Lystons: A Story of One Baltimore Family and Our National Pastime (Self-published, 2009).

Connor, Richard. “Laundryman Cambria Runs Club as Hobby But Knows How To Wring Out Success” The Sporting News, December 14, 1933.

Luis E. “Lefty” Tiant was the father of future major-league pitcher Luis Tiant. Lefty would go on to pitch for the Cuban Stars and New York Cubans in the Negro Leagues during the 1930s and 1940s. Tiant was elected to the Cuban Baseball Hall of Fame in 1983. Havana Red Sox second baseman Tomas “Pipo” de la Noval and Bugle owner Joe Cambria are also members of the Cuban Hall of Fame.

A photograph in the Drummondville (Quebec) Spokesman, August 20, 1929, 1, shows Basilio Cueria as a right-handed batter.

Bugle leadoff hitter Jimmy Lyston is the grandfather of the author.