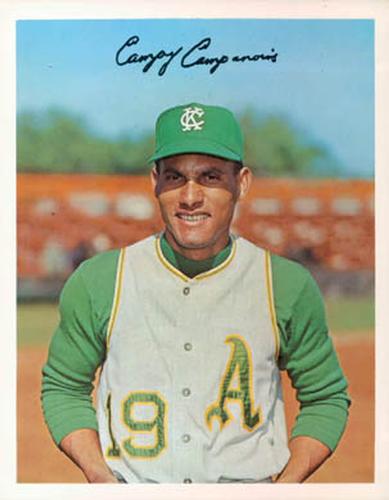 On Campy Campaneris Night1 at Kansas City’s Municipal Stadium, a crowd of 21,576 showed up to witness a different kind of baseball history. Bert Campaneris of the Kansas City Athletics became the first major leaguer to play all nine positions in a game.2 The event was dampened as the Athletics lost to the California Angels 5-3 in 13 innings. Campaneris was also lost to his team for a few days after a nasty home-plate collision with California catcher Ed Kirkpatrick.

Kansas City owner Charles Finley was behind the stunt, designed to improve the poor home attendance,3 and he promised a substantial (undisclosed) sum of money to Campaneris. Finley “made Campaneris a million-dollar player for the night,”4 taking out four insurance policies. The Athletics, mired in last place in the American League with a 51-87 record, squared off against the 64-77 Angels. The Athletics’ everyday shortstop started the game at his regular infield position, and Dick Joyce took his position as Kansas City’s starting pitcher, opposing California’s Dean Chance.

Campaneris had an uneventful defensive first half of the game. Joyce retired the Angels in order in the first. Campaneris walked to lead off the bottom of the first, stole second, moved to third on a sacrifice bunt by Jose Tartabull, and scored on a double by Ed Charles, staking Kansas City to an early lead. Campaneris and second baseman Wayne Causey switched positions to start the second inning. Kirkpatrick singled with two outs and was caught in a rundown, and Campaneris was credited with an assist in getting the out. In the third, Campaneris switched with third baseman Charles, and again Joyce retired the side in order. Campaneris moved to left field in the fourth and caught a fly ball by Jose Cardenal, who was his first cousin. The Angels scored a run on a single by Jim Fregosi and Joe Adcock’s double, tying the score. In the fifth Campaneris moved to center field and nothing was hit his way.

After the first inning Chance was solid for California, retiring 15 Kansas City batters in a row into the sixth inning. Campaneris moved to right field in the top of the sixth. With two outs, Albie Pearson singled. Fregosi lifted a high fly ball to right-center field and Campaneris made an error, as the ball popped out of his glove,5 allowing Pearson to score. In the seventh Campaneris was now at first base and handled one putout, a short pop fly. Despite having runners at second and third with one out, the Angels came up empty.

In the eighth inning Campaneris took the mound. The first batter he faced was Cardenal, who popped out to second. Then the A’s pitcher threw 10 straight balls, walking Pearson and Fregosi. With a 2-and-0 count, Adcock singled, driving in Pearson for a 3-1 California lead. Fregosi tried to steal third base as Bobby Knoop struck out and catcher Bill Bryan threw out Fregosi for the double play.

To add even more of a twist to the game, Campaneris pitched “ambidextrously, throwing lefty to left-handers, and switched against right-handers.”6 The versatile Athletics player had pitched a game both left-handed and right-handed for Daytona in the minor leagues.7 In allowing one run on a hit and two walks with a strikeout, he posted a 9.00 ERA for the game and for his career (This was the only time Campaneris pitched in his 19 years in the major leagues.)

Aurelio Monteagudo pitched the ninth for Kansas City with his team trailing 3-1. Kirkpatrick and Tom Egan reached on a single and walk. Paul Schaal lined out to center, and Kirkpatrick advanced to third. Chance struck out. Kirkpatrick tried to score on the strikeout pitch and collided with the catcher, Campaneris, who held onto the ball and tagged him out for the third out. In the collison, Campaneris injured his shoulder and neck and did not return to the game.8 He had played all nine positions, but he would not be on the field if the contest went into extra innings.

Chance allowed two singles in the bottom of the ninth, and with one out he was pulled for reliever Bob Lee. Athletics manager Haywood Sullivan sent up pinch-hitter Ken Harrelson, who singled, driving in a run. With two outs, Dick Green singled in Jim Landis with the tying run.

The Angels loaded the bases in the 10th but could not score. Kansas City had its own rally in the bottom of the 10th but stranded two. In the top of the 13th inning, Knoop drew a walk off Athletics hurler John O’Donoghue, and scored as O’Donoghue fielded Buck Rodgers’ bunt and threw wild to first. Kirkpatrick reached third. Diego Segui relieved O’Donoghue and walked Paul Schaal intentionally, loading the bases. Merritt Ranew grounded into a force play at the plate, but Cardenal lifted a fly ball to left and Rodgers came home with the Angels’ fifth run. The Athletics went quietly in the bottom of the inning and the Angels won, 5-3.

Campaneris had done what no other ballplayer had done – he played every position in one game. He went 0-for-3 at the plate with a strikeout, a walk, and a run scored. He made putouts in left field, center field, and first base and two at catcher, stole a base, and struck out. He had an assist at second, made an error in right field, and was involved in a critical collision at home plate that kept California from scoring a run.

With all of skipper Sullivan’s switches, Tartabull, Causey, Charles, and Landis each played multiple positions as well. Kansas City used eight pitchers in the game. Twenty-four Athletics played in the game. The next day, the Athletics-Angels game drew only 1,271. The same day in Los Angeles, 29,969 turned out for a momentous contest: Sandy Koufax’s 1-0 perfect game against the Cubs.

6 “Switch Pitching 101: Bert Campaneris played every position in one game including pitcher,” http://switchpitching.blogspot.com/2013/09/bert-campaneris-played-every-position.html.