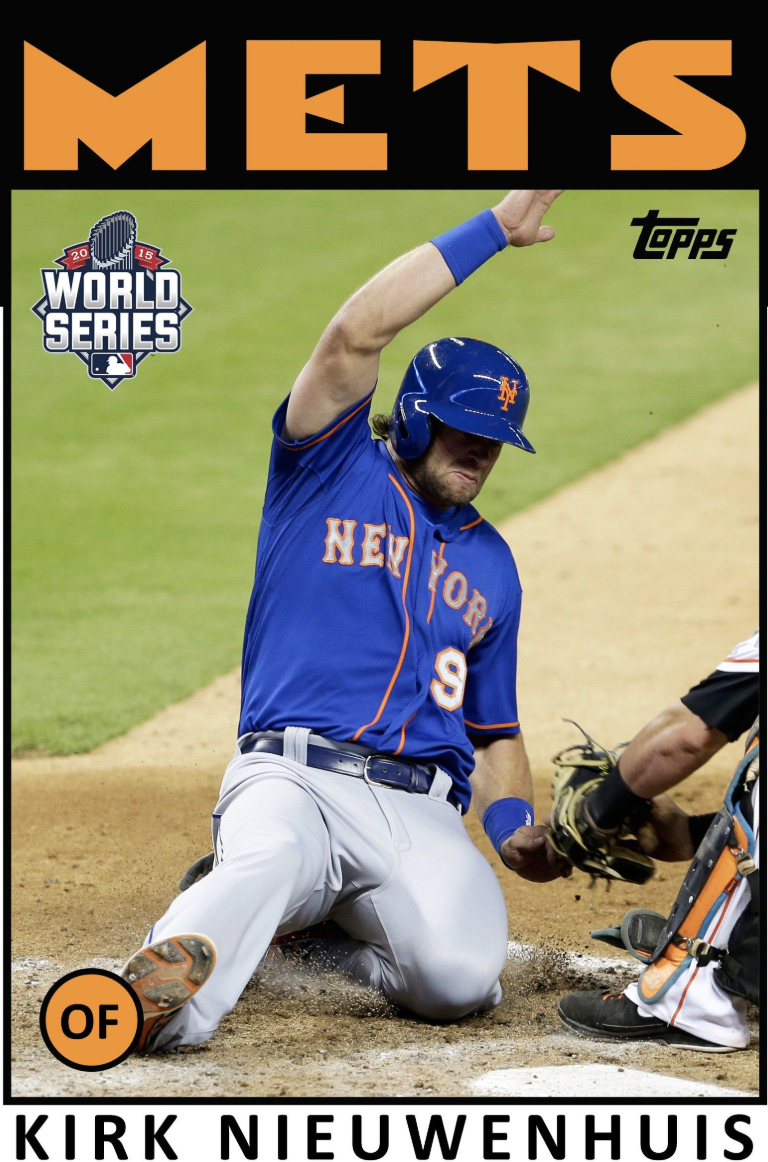 As the July 31, 2015, nonwaiver trade deadline1 got closer, it became apparent that the race for the National League East Division title was going to be a two-team affair, the New York Mets and the Washington Nationals. Speculation began months before as to who would contend for a postseason position and be buyers as the deadline loomed, what they might need to solidify their position, and what players might be available at what cost.

Each team made a major move as the deadline approached. On July 28, the Nationals traded minor leaguer Nick Pivetta to the Phillies for their closer, Jonathan Papelbon, and cash. The deal was not without controversy. Drew Storen was 29-for-31 in save opportunities at the time of the trade, but Nationals general manager Mike Rizzo was clear: “Papelbon is our ninth-inning pitcher.”2

Minutes before the trade deadline, the Mets obtained Yoenis Cespedes from the Detroit Tigers in exchange for Michael Fulmer and Luis Cessa. Although Cespedes was a very accomplished defensive outfielder, it was clear that the Mets obtained the power hitter for his offense, having scored the fewest runs of any team in baseball through late July.3 In addition to the Cespedes trade, the Mets also made deals to obtain Kelly Johnson, Juan Uribe, and Tyler Clippard to strengthen their infield depth and add a bullpen arm. In total, the Mets had given up five minor leaguers for their new acquisitions. It was clear that the Mets were serious about contending for a postseason spot for the first time since 2006.4 Fans could eagerly anticipate what impact these players would have down the stretch of the race for the postseason.

Nine Mets-Nationals games remained on the schedule, including three at Citi Field beginning the very night of the trade deadline. Recent records in this rivalry revealed little regarding what was about to happen. The Nationals won 15 of the 19 games played against the Mets in 2014 and held a 6-4 record thus far in 2015, as well as a three-game lead in the National League East standings. The first game of the three-game series ended in dramatic fashion when Wilmer Flores hit a walk-off home run off Felipe Rivero in the bottom of the 12th inning for a 2-1 Mets victory. By the time the weekend was over, the Mets had swept the Nationals out of New York and into a first-place tie in the NL East standings. Their early September series in Washington loomed large.

As the teams readied for their three-games series at Nationals Park starting September 7, the Mets held a four-game lead in the division race. In the month since their last meeting, the Mets had run off a seven-game winning streak while the Nationals had a six-game losing streak.

In the first game, the Mets got off to a 3-0 lead on solo home runs by Michael Conforto, Kelly Johnson, and Yoenis Cespedes off Max Scherzer. The lead was wiped out in the fourth inning when the Nationals scored five runs, including a grand slam by Wilson Ramos. The Mets tied the score at 5-5 in the sixth inning when Cespedes, who had doubled, scored on Travis d’Arnaud’s sacrifice fly. The Mets scored three runs in the seventh inning that included an RBI double by Cespedes and led for good, 8-5. All that was left was to have Jeurys Familia strike out the side in the ninth inning for his 37th save. Mets’ comeback victory number one was in the books!

For the second game in the series, the pitching matchup was set, the Nationals’ Jordan Zimmermann (12-8, 3.38 ERA) versus the Mets’ Matt Harvey (12-7, 2.60 ERA). Harvey, in his first full season back from Tommy John surgery, was in the middle of an innings-limit controversy that involved his agent Scott Boras, Dr. James Andrews, who performed the surgery, and the Mets.5

The game didn’t start well for Harvey. Singles by Anthony Rendon and Yunel Escobar set the stage for consecutive RBI singles by Clint Robinson and Ian Desmond for a 2-0 Nats lead. In the top of the second, David Wright hit a solo home run to left for the Mets to cut the lead in half. Bad back and all, Wright was playing in only his 20th game of the season. The Nationals answered immediately and manufactured a run. Michael Taylor walked, was sacrificed to second by Jordan Zimmermann, and scored on Anthony Rendon’s RBI single.

The Nationals’ lead remained at 3-1 until the bottom of the sixth inning. Escobar singled and Robinson walked. When Harvey was unable to cleanly field a sacrifice bunt by Desmond, the bases were loaded. Taylor hit a hot grounder up the middle that skipped over the glove of center fielder Cespedes and all four runners scored. Cespedes seemed disconsolate over his error despite the encouragement of his teammates and coaches in the dugout after the inning ended.6 Was the Mets’ 7-1 deficit insurmountable in what was now a bullpen game?

Nationals relief pitcher Blake Treinen started the top of the seventh inning by yielding a single to David Wright. Treinen retired the next two batters and then things fell apart for the Nationals relievers. A walk to Wright and an RBI single by Wilmer Flores, and Treinen was done. Felipe Rivero walked his only two batters and was replaced by Drew Storen. Yoenis Cespedes cleared the bases with a double down the left-field line and suddenly the Mets trailed by just one run at 7-6. Storen proceeded to walk Daniel Murphy, advance the runners on a wild pitch, and walk the next two batters (forcing in a run) before getting the third out on a lineout. The Mets had tied the score, 7-7, on three hits and six walks in the inning.

In the top of the eighth inning, Kirk Nieuwenhuis became the latest Mets hero when he crushed a two-out solo home run to deep right center off Papelbon for an 8-7 Mets lead. Tyler Clippard retired the Nationals in order in the eighth and Jeurys Familia got Escobar to ground into a double play in the ninth with two runners on base to close out his 38th save. Remarkably, Mets’ comeback victory number two was also in the books!

On the field just before the third game of the series, New York Times sportswriter Tim Rohan noted that “the Nationals had to smile as they posed for their annual team picture, coming off two of their most dispiriting losses of the season.”7 Again, the Nationals took a lead into the late innings of the game. Stephen Strasburg retired 21 of the first 25 batters he faced and entered the eighth inning with 12 strikeouts and a 2-1 lead. Mets starter Jacob deGrom was equally effective with nine strikeouts in seven innings of work. In the eighth inning, Kelly Johnson hit a leadoff homer off Strasburg and the score was tied at 2-2. Two batters later, Strasburg was replaced by Drew Storen after Curtis Granderson singled. Yoenis Cespedes promptly hit his 32nd home run of the season off Storen and the Mets led 4-2. The Nationals got the score to 4-3 on Bryce Harper’s second home run of the game, off Tyler Clippard, but the Mets got that run back with a run off Jonathan Papelbon in the ninth inning for a 5-3 lead. Mets’ comeback victory number three was in the books when Jeurys Familia again closed out the Nationals for his 39th save of the season. For the series, the Mets got exactly the offense they expected when they acquired Cespedes on July 31: six hits in 14 at-bats, three doubles, two home runs, and seven RBIs.

The Mets left Washington and continued building a winning streak to eight games and expanding their division lead to 9½ games. The remaining regular-season schedule, ending with a three-game series against the Nationals at Citi Field, soon became irrelevant for the Mets. They clinched the National League East title on September 26 with a 10-2 win over the Cincinnati Reds at Great American Ball Park.

The Nationals never recovered from two consecutive three-game sweeps by the Mets. In fact, on the day after the Mets’ clinching victory, Jonathan Papelbon started a dugout fight with Bryce Harper in the Nationals’ home-season finale against the Philadelphia Phillies and was suspended by the Nationals for the balance of the season. “Of course, the ruckus started in the Nats’ favorite inning for disasters involving relievers: the eighth.”8 By the time early October came around, Nationals manager Matt Williams had been fired.

The Mets won the division title in convincing and emphatic fashion against their principal competition. It would be rather subjective to suggest that any one of the Mets’ three consecutive comeback wins against the Nationals in early September was the decisive game. Nonetheless, according to the Elias Sports Bureau, the Mets’ 8-7 comeback victory on September 8 was their largest comeback this late in a game since 2001, serving to break whatever spirit remained for the Nationals.9 Now it was time for some postseason baseball in New York!

This author watched the three-game series from three different locations within Nationals Park. That didn’t make any difference in the outcome, a Mets’ sweep! Thomas Boswell, Washington Post columnist, captured the sentiment perfectly with a question. “Who wants to endure moments like this series that send thousands of fans to the Metro with expressions of glazed, disbelieving pain that we usually reserve for real-life miseries?”10 Not me!

1 The nonwaiver trade deadline has been July 31 since 1986. For the previous six decades, the deadline date was June 15. The outrage in baseball circles surrounding Babe Ruth’s historic $100,000 sale from the Red Sox to the Yankees in 1920 played a role in establishing restrictions on player swapping between teams. For additional discussion see: Jacob Pomrenke, “Many Twists and Turns in History of MLB Trading Deadline,” July 27, 2011, sabr.org/latest/many-twists-and-turns-history-mlb-trading-deadline.

6 Michael Powell, “A Night of Disconsolation and Redemption for the Mets,” New York Times, September 9, 2015.

9 Tim Rohan, “Matt Harvey Falters, but the Mets Storm Back for a Victory.”

10 Thomas Boswell, “After Another Buckle, the Nationals Prove They Need a Stronger Spine,” Washington Post, September 9, 2015.