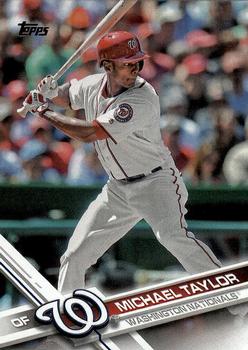 Washington’s Max Scherzer (13-5, 2.19 ERA) was hoping not only to bring his team closer to winning their division, but also to burnish his credentials for a third Cy Young Award.2 The first inning was not a promising start. César Hernández popped out, but Max walked Odúbel Herrera and Rhys Hoskins.

Rookie Nick Williams, celebrating his 24th birthday, had not faced Scherzer before. That didn’t faze Williams: He homered over the scoreboard for an early 3-0 Phillies lead. After Maikel Franco flied out, Scherzer issued a very un-Max-like third walk in the inning. He finally struck out Jorge Alfaro to end the inning, but he’d thrown 28 pitches. Pitching coach Mike Maddux was keeping a close eye on Scherzer since he’d had to come out of his previous start after taking a line drive off his left calf.3

Jake Thompson (1-1, 4.50 ERA) was making his fifth start of the year for the Phillies.4 Howie Kendrick, his Phillies teammate for the first four months of the season,5 worked a one-out single. Daniel Murphy grounded a single past the shortstop, allowing Kendrick to reach third on a hard slide into Franco’s glove. The ball got away from Franco; the only reason it didn’t roll into the dugout was that Thompson was properly backing up the play.

Kendrick had to stay put, but he wasn’t there long – Ryan Zimmerman’s shattered-bat single drove him in. That was all for the Nationals, though; the inning ended with the score 3-1, Phillies.

Scherzer looked more like his usual efficient self in the second inning, needing only 10 pitches for three outs. J.P. Crawford opened with a single and advanced to second on Thompson’s sacrifice, but was left there.

Michael A. Taylor opened the home half of the second with a single just over shortstop Crawford’s outstretched glove. He stole second and made it to third on Alejandro De Aza ’s sacrifice. That brought Scherzer to the plate. He flied out, not deep enough to score Taylor (who started to run, but then thought better of it). But Trea Turner dropped one into left just in front of Hyun Soo Kim, scoring Taylor. Kendrick grounded into a force out, but the Nationals had pulled closer; 3-2, Phillies.

Scherzer really hit his stride in the top of the third. Back-to-back strikeouts, accompanied by his usual stalking around the mound, made the home crowd feel that he might be finding his groove. All he allowed was an infield hit by Franco.

Murphy walked to start the bottom of the third. Zimmerman hit a check-swing roller to second. Second baseman Hernández booted the ball (it looked as if he’d tried to turn the double play before the ball was in his glove), so all hands were safe. The Phillies had another chance for a double play on Anthony Rendon’s grounder to first, but Hoskins bobbled the ball, leaving only a play at first. When Matt Wieters walked on four pitches, bringing up Taylor with the bases loaded, pitching coach Bob McClure paid a mound visit.

Taylor came to the plate with a 7-for-17 career record with the bases loaded. The first pitch was a slider, called for a strike. He lined the second pitch into center field, over Herrera’s outstretched glove.6

The ball went all the way to the wall, then bounced away. Murphy, Zimmerman, and Wieters scored. Taylor kept on running; Nationals third base coach Bob Henley7 waved him home.

The relay throw (when Herrera finally trotted over to get the ball) was well up the third-base line and got past the catcher. Taylor slid in but missed the plate. Murphy, who was flat on the ground to the first-base side of home plate, frantically motioned for Taylor to reach back and tag – which he did, before popping up to the congratulations of his teammates and the roar of the crowd.8

He’d completed the circuit in 15.04 seconds. As expected, the crowd demanded a curtain call. De Aza and Max were out quickly to end the inning, but the Nationals had the lead, 6-3.

Scherzer collected two more strikeouts in a clean top of the fourth.

The Nationals added to their lead in the fourth. Turner doubled off the center-field wall. Kendrick hit a groundball toward short. It could have easily been an out at third or first, but Turner and Kendrick were both safe due to a comedy of bobbles between the Phillies’ shortstop and third baseman. Murphy grounded into a double play but Turner scored: 7-3, Nationals. Zimmerman grounded out to end the frame.

Scherzer threw another clean inning in the top of the fifth, including two more strikeouts. In this inning he lost patience with Herrera’s fidgeting in the batter’s box,9 and quick-pitched him for a “strikeout looking” (although he wasn’t actually looking). Max looked back at the umpire to confirm the strikeout call, and then did his usual post-strikeout stalk behind the mound.

Thompson worked a one-two-three bottom of the fifth.

It looked as if Scherzer might have an easy top of the sixth: Williams led off with a single but was erased when Franco grounded into a double play. But Max allowed a double to Kim and plunked Alfaro. Kim scored on Crawford’s single to cut the deficit to 7-4.

The run triggered a mound visit from Maddux. This mound visit might have helped: Scherzer got pinch-hitter Freddy Galvis10 to pop out.

Yacksel Ríos took over the Phillies’ pitching in the bottom of the sixth. Pinch-hitter Andrew Stevenson11 singled for his ninth big-league hit. Turner homered off the back wall of the visitors bullpen for a 9-4 advantage.

Kendrick singled; Murphy doubled. Murphy’s ball was in Herrera’s glove momentarily as Herrera jumped against the center-field wall but it popped out. After the play, Herrera stood in center field hitting his glove (either punishing it or still trying to break it in). Zimmerman’s single scored Kendrick, giving the Nationals a solid 10-4 lead.

The Phillies struck back in the seventh against relief pitcher Oliver “Ollie” Pérez. Hernández bounced a single off the first-base bag. Herrera followed with a single off Pérez’s glove, giving him a 21-game hitting streak.12 Hoskins cut the Nationals’ lead in half with a three-run homer into the visitors bullpen.

When Williams singled, making him the fourth straight Phillie to reach base, Matt Albers took over the pitching. Franco grounded out, moving Williams to second. Kim singled and Williams tried to score, but Taylor earned his eighth outfield assist of the year with a perfect throw to the plate. Although Alfaro was plunked for the second time, the frame ended with a Crawford groundout and the score 10-7, Nationals.

In the bottom of the seventh the Nationals managed to load the bases again against Hoby Milner, including another single for Taylor. Murphy lined out to kill the rally.

Brandon Kintzler, one of the trio of relievers13 acquired by the trade deadline to shore up the Nationals’ bullpen, pitched the eighth, allowing no hits.

Héctor Neris, the Phillies’ closer, pitched the bottom of the eighth. Rendon hit a two-out double into the left-field corner. Taylor came to bat to another ovation, and rewarded the cheers with a two-out triple, easily scoring Rendon. De Aza struck out, but the Nationals had a reasonably comfortable 11-7 lead going into the ninth inning.

But the Phillies made it close. Shawn Kelley (not one of the recently acquired trio) allowed singles to Hoskins and Williams. Maddux paid a mound visit, which did not help: Franco’s three-run homer brought the Phillies within one run. When manager Dusty Baker made the pitching change to Sean Doolittle (one of the trio), it was not clear whether the nervous crowd was “booing” or “DOOOO-ing.” It took Doolittle 16 pitches, but he got three swinging strikeouts to earn his 20th save of the year and reduce the Nationals’ magic number to three.

This was a career game for Taylor: Four hits, five RBIs,14 a stolen base, the game-winning hit, and an outfield assist. After the game, Taylor was informed that this was the first inside-the-park grand slam since the one he had allowed on September 25, 2015, when he dived for an Aaron Altherr liner, missed it, and the ball rolled to the fence.15 “Oh, really?” said Taylor. “Feels better to be on this side of it.”16

In addition to Baseball Reference, Retrosheet, and the sources cited in the Notes, the author reviewed the broadcasts on YouTube.

We were at this game. There was an audible buzz for a couple of innings after Taylor’s home run, since so few people had seen one.

1 “Magic number” refers to the sum of the division leader’s wins and the second team’s losses required for the leader to clinch the division. The Nationals clinched the division two days later. The Phillies stayed in last place.

5 Kendrick moved from the Phillies to the Nationals on July 28 in exchange for McKenzie Mills and international bonus slot money.

6 Herrera was not charged with an error, since he apparently misjudged the ball rather than misplayed it. Oddly enough, exactly two years earlier, Taylor came up with the bases loaded against the Mets. The ball skipped over the glove of Yoenis Cespedes, allowing all four runners to score. Taylor was only credited with a single since Cespedes was charged with a three-base error despite not having made contact with the ball.

7 Henley’s nickname was “Sendley” as he had a reputation for aggressively sending runners.

8 Taylor recorded only the second inside-the-park grand slam in franchise history, a feat previously accomplished only by the Expos’ Bombo Rivera on June 26, 1976, against the Pirates. Zuckerman.

9 Even the Phillies’ broadcasters acknowledged that if Herrera weren’t playing for them, his routine would get on their nerves – and they didn’t blame Scherzer for taking advantage of the opportunity for an easy strikeout.

13 Doolittle and Ryan Madson were the other two. They were acquired in a trade with Oakland on July 16, 2017.