This article was written by Casey Tibbitts

Baseball before the Civil War was very much a regional game, focused in the Northeastern United States around local clubs that played by local rules. In 1845 the Knickerbocker Base Ball Club of New York devised one of the first set of codified regulations, which became known as the Knickerbocker rules. Meanwhile New Englanders played a version of what we now know as the Massachusetts Game, a descendant of Town Ball and Rounders. Though similar, the two versions had substantial differences. 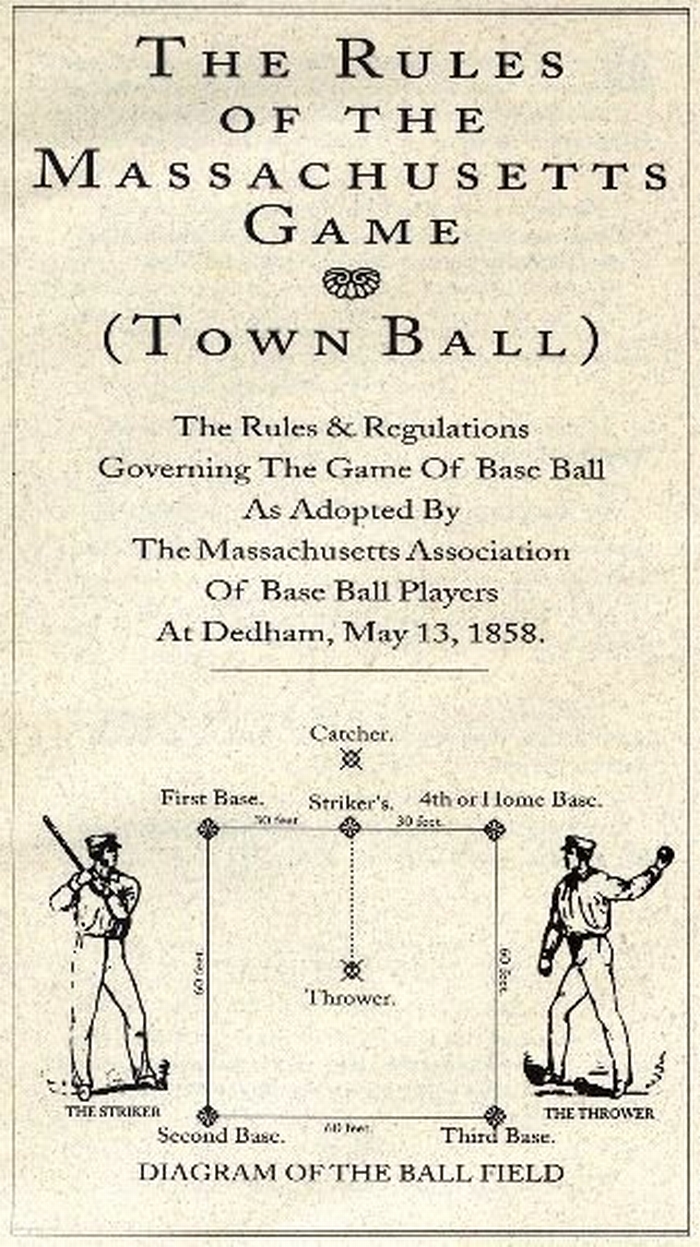 Fifteen New York area clubs convened in early 1857 and adopted almost all of the Knickerbocker rules as official, making what we call the New York rules. Later that same year, a young baseball enthusiast named Edward G. Saltzman moved from New York to Boston and began promoting this style of play. A former second baseman for the Gothams of New York, a rival of the Knickerbockers, Saltzman soon formed the first club in New England dedicated to playing the New York game — the Tri-Mountains of Boston (named after the three hills that dominated the early Boston skyline).1

On May 13, 1858, ten Massachusetts clubs met in Dedham, Mass., to form the Massachusetts Association of Base Ball Players and to codify their regulations. The Tri-Mountains advocated the adoption of the New York rules but were voted down, and the rules of the Massachusetts Game became official in the region.2

The Tri-Mountains could not find another club to face them on the field, so they spent more than a year practicing and playing intrasquad games. No one else in the area played by the New York rules, and no one from New York would make the trip to Massachusetts to oppose them. At last the Portland Club, Maine’s first organized team3, agreed to travel to Boston for a match. On September 9, 1858, the two teams met on Boston Common in the first recorded game played in New England under the New York rules. The following day the Boston Herald ran this account of the contest:

An Interesting Game of Base Ball on the Common –
The Portland Club of Portland, Me., vs. the Tri-Mountain Club of Boston

A very closely contested game of base ball was played on the Common in this city yesterday afternoon, between the Portland Club of Portland, Me., and the Tri-Mountain Club of Boston. The game was that known as the New York game, and the Portland boys won by five runs. The rules of the New York game differ materially from those adopted by the Massachusetts Association of Base Ball Players last fall. The bases are placed at the angles of a rhombus instead of a square, the home base being the position of the striker; provision is made for “foul hits,” and the ball is caught on the “bound” as well as on the “fly.” The game consists of nine innings instead of one hundred tallies, and the ball is pitched, not thrown.

The playing commenced about three o’clock, the Tri-Mountain Club having the first innings, and the ninth innings of the Portland Club was finished at a quarter to six. ... The playing was witnessed by a large and interested crowd of spectators.4

A half-century later, the New York Times republished an account of the game and added this note about the contest’s final runs:

The finish of the game was highly sensational.

It should be borne in mind that, at that time, a “home run” counted two.

When the score was “tied” for the last time, in the last half of the “ninth,” “Capt. Sidney” (who was then thirty years of age, weighed two hundred and thirty pounds, and was a steam-boat captain, in active service, between New York and Portland) went to bat with the bases full and two men out.

The fates allowed him to “knock a long fly,” which let the four of ’em around, scoring the five extra runs.5

The popularity of the New York game steadily grew in New England, and by September 1859 there were 13 clubs in Massachusetts that played according to those rules.6The New York rules continued to spread for a variety of reasons, which brought together teams from all parts of the Union. In 1865 one of the nation’s leading sports weeklies predicted the demise of the Massachusetts game and emergence of the New York rules — a prediction that soon proved true:

The National Association or “New-York game” is now almost universally adopted by the Clubs all over the country; and the Massachusetts, and still more ancient style of playing familiar to any school-boy, called “town ball,” will soon become obsolete. No lover of the pastime can regret this, as the New-York mode is superior and more attractive in every way ; and better calculated to perpetuate and render “our national game” an “institution” with both “young and old America.”7 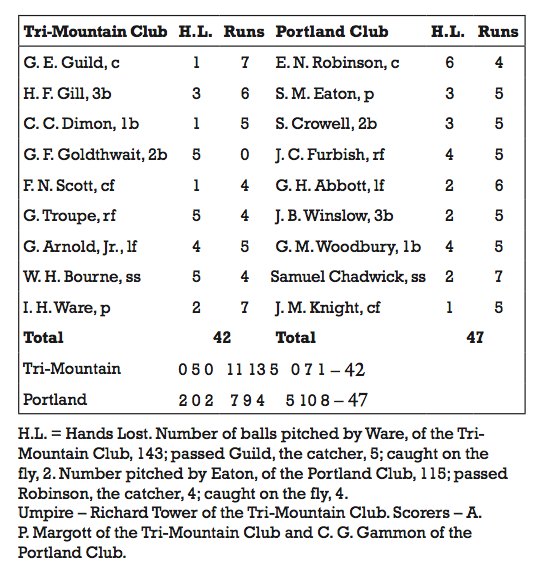