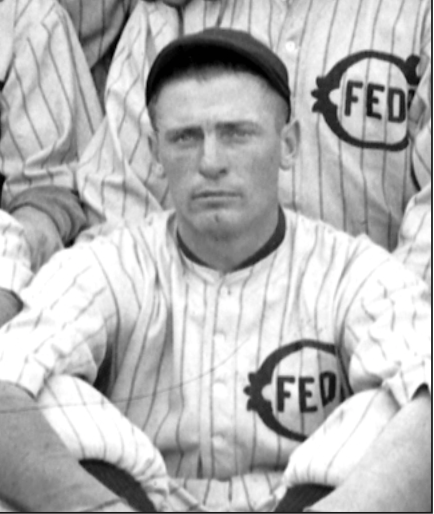 The Chicago Chi-Feds went into Buffalo looking to get back into first place. With his team trailing league-leading Indianapolis by just one game, Chicago player-manager Joe Tinker was confident in its ability to get back on top, saying, “We have several games to play yet … and I think my club will top the ladder when the windup comes.”1 Tinker added, “[I]f there is to be any championship baseball teams claiming a world’s title, we will have as good a claim as the National and American League winners. We have had a bit of the bad breaks lately, or we would be in first place now, but we’ll finish there.”2

Buffalo came into the series battling Brooklyn and Baltimore for third place in the new league. Tinker showed great respect toward the Buffeds, saying, “I think Buffalo’s showing has been one of the big surprises of the season. You have a very strong club here now, and the team that beats you knows it has been a war.”3

The Chi-Feds sent right-hander Erv Lange, 12-8 with a 2.04 ERA, to the mound to face Buffalo’s Fred Anderson, 10-13 with a 3.03 ERA, on an unusually cold September day. In fact, an International League game less than a mile away between the Buffalo Bisons and Toronto Maple Leafs was called off because of the frigid temperatures. Despite the cold, the Federal League game was played as scheduled. The Buffalo Courier wrote, “It was chill enough to make the delicate ones stick around the fireside yesterday but their absence was their punishment and it served them right. They missed a thrill about every seven seconds.”4

Chicago jumped on top in the first inning. Leadoff batter Max Flack walked and scored on cleanup man Dutch Zwilling’s triple. In the second inning Joe Tinker hit a looper that Buffeds right fielder Tex McDonald charged and tried to “pick it off the grass tops,” but missed. The ball hit McDonald’s heel and “caromed to the pavilion.”5 Tinker wound up at third base on a play that was scored a triple. Tinker scored when Jack Farrell tapped a ball to first baseman Hal Chase, who picked up the ball, made a futile attempt to tag Farrell, and fired home too late to get Tinker. All hands were safe on what was nearly a double play, and the Chi-Feds increased their lead to 2-0.

Buffalo broke through in the third inning “and dragged themselves out of the whitewash tub.”6 After Fred Anderson singled, Joe Agler hit a smash to third baseman Rollie Zeider “that was too peppery for him to handle.”7 The next batter, Tom Downey, tapped the ball back to Lange, “who had a perfect double play set up for him. But he threw the ball over (third baseman) Zeider’s head and two runs came in, tying the score.”8

The Buffeds scratched out another run in the fifth to take the lead. Fred Smith singled and advanced to second on a sacrifice. Pitcher Fred Anderson collected his second hit of the day, on a line drive to center field. Dutch Zwilling “picked it up on the first bounce and had Smith caught at the plate by twenty feet, but (catcher Art) Wilson dropped the ball and the runner counted.”9

After Lange was pinch-hit for in the top of the seventh, Rankin Johnson came in to pitch. Johnson hit the first batter he faced, Fred Smith. He then fanned the next two batters, but Joe Agler stroked an RBI triple to right field to put Buffalo further in front, 4-2.

The eighth inning provided plenty of excitement, beginning with an incredible catch by Agler. Tinker led off the inning by belting a ball that looked as if it was headed for the bleacher seats in left field. As Agler went back, the Buffalo Courier reported, he appeared to lose the ball, then: “He turned around a couple of times, then ran sideways to the bleacher fence. The crowd was all ready to start groaning and Tinker was nearing second with all steam on, when Joe suddenly stuck out with his left hand — the bare one, mind you — and grabbed the pill less than four feet from the ground.”10 The Buffalo crowd went wild as a disbelieving Tinker returned to the dugout for the first out of the inning. The Buffalo Evening News called Agler’s play “the most spectacular catch seen on Federal field this season.”11

But the inning wasn’t over for the Chi-Feds. The next batter, Fred Beck, singled. Jack Farrell blooped a single to center field to put runners at the corners with one down. Pinch-hitter Bruno Block cut Buffalo’s lead in half when he singled to make the score 4-3. Bill Jackson ran for Block and was forced out at second Max Flack’s grounder. However, Jack Farrell, who started the play at second base, rounded third and headed for home. The Chicago Tribune described what happened next: “Farrell then pulled a boner, by trying to score from second and was caught between third and home. Fortunately, he was hit in the back by (third baseman Fred) Smith and scored, Flack reaching third.”12 Farrell’s run tied the game, 4-4. The next hitter, Rollie Zeider, singled Flack home, and the Chi-Feds had a 5-4 advantage, their first lead since the third inning.

The lead didn’t last long. Mike Prendergast came on to work the eighth for Chicago, and after he got two outs, Hal Chase belted a ball into the left-field bleachers to tie the game. Buffeds manager Larry Schlafly gave the ball to his ace, Russ Ford, to start the ninth inning. From that point on, Ford and Prendergast dueled as the teams battled into extra frames.

Hal Chase made a couple of nice plays to help keep the Chi-Feds off the scoreboard in the extra frames. In the 11th speedy Max Flack hit a bounder down the first-base line that Chase had to charge, leaving first base uncovered. Chase “made one swinging scoop as he raced in, snatched the ball from the ground clean as a whistle and with the same motion just nipped Flack as he flashed past.”13 In the 12th Tinker attempted a hit and run with Al Wickland at first base. Tinker hit the ball to third baseman Fred Smith, who fired the ball to first for the out, but as Wickland rounded second and headed for third, Chase took Smith’s throw and “got the ball back across the diamond with a single motion and Smith had the ball on Wicky in a flash, as neat and swift a bit of pegging as one would want to see.”14

In the bottom of the 12th with one down, Buffalo’s Joe Agler singled, his fourth hit of the afternoon. Tom Downey singled, and when left fielder Al Wickland bobbled the ball, the runners advanced to second and third. But Prendergast bore down, striking out Baldy Louden for the second out and getting Tex McDonald to ground out to first to retire the side.

At this point, it was about 6:20 P.M., and the sun was setting in the late summer sky. Umpire Bill Brennan decided to call the game “with the excitement so intense the crowd wanted the clubs to play into the darkness.”15 The Buffeds quickly announced that the tie game would be made up as part of a doubleheader three days later, on September 12.16

After the 12-inning battle with Buffalo, Chicago didn’t gain or lose any ground in the pennant race, as Indianapolis split a doubleheader with Baltimore. So, at the end of their long day, the Chi-Feds remained just a game back of the league leaders.

Even though the game ended in a tie, baseball fans who braved the freezing temperatures and stuck around for all 12 innings were treated to some terrific baseball. The extra-inning contest was chock full of action, with timely hitting and top-notch defensive plays. The Buffalo Enquirer proclaimed, “It was one of the best games seen at the local Federal Field this season and the few fans were treated to many thrills during the long-drawn battle.”17 The dramatic game barely allowed fans time to think about how cold they were. As the Buffalo Courier noted, “There was so much ‘pep’ and big-time stuff on tap that the 1,351 fans scarcely had time to put their hands in their pockets. Their blood was warmed by a series of circus stunts that seemed purposely stowed away for tap on this occasion and there was no room for complaint.”18 Fans certainly received their money’s worth during the thrilling 12-inning affair.

16 Chicago swept the doubleheader from Buffalo on September 12.