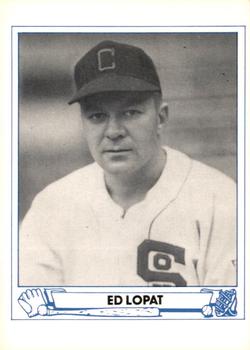 Hopes were running high on this warm September night in 1944. In Western Europe, Allied forces crossed the Moselle River in northern France during the largest artillery exchange with the Nazis to date. For the first time, a redhead — 19-year-old Venus Ramey of Washington, D.C. — was crowned Miss America in Atlantic City.1 Even on the South Side of Chicago, hearts were light as Steady Eddie Lopat gave his beleaguered White Sox a needed boost in outlasting ex-GI Jack Kramer and the pennant-chasing St. Louis Browns, 2-1, in a 14-inning marathon at Comiskey Park.

The 1944 campaign had not been kind to White Sox skipper Jimmy Dykes and his players. Like most teams at this time, Dykes’ better players were serving in the military, including shortstop Luke Appling, right fielder Taffy Wright, infielder Dario Lodigiani and pitchers Johnny Rigney and Eddie Smith. Consequently, the quality of play on the diamond suffered. Offensively, the team ranked last in batting average and other hitting categories. Third baseman Ralph Hodgin sported the best average at .295. Defensively, the result was much the same; the White Sox finished sixth in fielding percentage. By the time the White Sox hooked up with the Browns in this series, the club sat in seventh place with no chance of advancing out of the second division.

The brightest light of this dreary White Sox season was rookie left-handed starter Eddie Lopat. Son of a shoe repairman, Lopat toiled in the minors for seven seasons before being called up for a 30-day trial in 1944 by the White Sox. Expectations were not high for this smallish hurler, who did not possess a commanding fastball. However, Lopat’s deceptive pitching motion and excellent use of off-speed pitches, particularly his screwball, landed him a permanent spot in the White Sox’ starting rotation.2

Coming into the Browns series, Lopat had won three consecutive outings and four of his last five starts to even his season record at 9-9. Despite this surge, Lopat’s season record against the Browns was wanting. In his first major-league start on April 30, Lopat lost to the Browns, 5-4. On June 13 Lopat was defeated, 5-3, by his opponent on this day, Jack Kramer. A week later, on June 20, he had a no-decision as the White Sox lost once again to the Browns, 4-3.

St. Louis started the 1944 campaign with a bang, winning nine in a row which broke an American League record of seven set by the 1933 Yankees. After the All-Star break, the Browns reeled off a 10-game winning streak and by mid-August they held a seven-game lead. Then reality set in as the Browns, hampered by poor defense, meek offense, and the inability to hold leads, surrendered all of that lead to the Yankees and Tigers by early September. A thrilling pennant race was now underway.

Jack Kramer was a major factor in the Browns’ turnaround. The workhorse of manager Luke Sewell’s starting corps.3 right-hander Kramer was playing in his first full season after serving in the Navy’s Seabees. A clotheshorse with the moniker of Handsome Jack, Kramer was a fastball pitcher who hated to be pulled from games. Coming into the White Sox series, he had a record of 1-2 over his last five appearances, but his most recent outing, on September 3 against the Tigers, resulted in a 7-1 complete-game victory.4

As the 9,325 spectators settled into their seats at Comiskey Park (some were St. Louis rooters including a contingent of players’ wives5), it was apparent that this middle game of a five-game series was a must-win situation for the Browns.6 The teams had split the first two games, the Browns coming out on top in the opener, 5-4, despite committing four errors and the White Sox returning the favor with a 9-5 thumping of the Browns in the second contest. By game time, St. Louis was a full game behind the Yankees in second place and could not afford to lose further ground.

The Browns were unable to draw blood in the opening round despite a two-out single to center by center fielder Mike Kreevich and an almost round-tripper to deep left-center by shortstop Vern Stephens that was hauled in by Sox center fielder Thurman Tucker.

Kramer was not so fortunate in the home half of the first. With one out, White Sox second baseman Ray Schalk smashed a grounder off Kramer’s glove for an infield hit. After third baseman Ralph Hodgin took Kreevich deep in center for the second out, center fielder Hal Trosky connected for a double to the scoreboard in right, scoring Schalk for the game’s first run.

After the first inning, the game turned into a classic pitching duel. Kramer allowed only one hit, a single in the fifth by catcher Mike Tresh, until the 10th, when Hodgin opened with a single to right-center. Lopat was equally effective as he scattered three hits through the next six innings.

White Sox fans were tasting victory as Lopat took the mound to begin the eighth. The crafty left-hander was able to get Browns catcher Red Hayworth to ground out to shortstop Skeeter Webb for the first out. Then the seemingly impossible happened and that White Sox win was put on hold. Kramer came to the plate and smacked his second home run of the season to deep left-center. (His first also came at the expense of the White Sox.)7 The Browns were unable to capitalize on Kramer’s dinger, but the damage had been done. Game tied, 1-1.

The ninth inning came and went like a whisper. As the game moved into extra innings, Lopat and Kramer showed no signs of tiring, but both teams were struggling to put together anything that resembled a rally.

In the Browns’ 10th and 11th innings, opportunities to take the lead came and went. First baseman George McQuinn opened the 10th with a base hit to left. He moved to second on a sacrifice by Hayworth and went to third when Kramer grounded out to Lopat for the second out. Second baseman Don Gutteridge ended the inning with a line drive to White Sox left fielder Eddie Carnett.

In the top of the 11th, Browns right fielder Milt Byrnes drew the only walk off Lopat in the game. Kreevich sacrificed Byrnes to second. Byrnes had more ambitious designs. Seeing that White Sox third baseman Hodgin was standing away from the base, Byrnes made a wide turn at second. Suddenly he thought better of it but it was too late and he was tagged out by Webb in a desperate attempt to scamper back to second. With that threat extinguished, Lopat proceeded to retire the next 10 St. Louis batters.

Finally the White Sox bats came alive in the home half of the 14th. With one out, Schalk lined a single to center, his third hit of the game. Hodgin sent his second single of the contest into left, moving Schalk to second. After Trosky grounded to Gutteridge for the second out, Tucker swung at the first pitch from Kramer and hit “a 5-and-10 cent single” between backpedaling Gutteridge and charging Byrnes in right to score Schalk and give the spoiler White Sox a much-needed victory.8

The game was a pitching masterpiece as both Lopat and Kramer went the distance. It was perhaps the best pitching performance in Comiskey Park during the 1944 season. Kramer scattered nine hits and yielded only one walk while fanning six. Lopat was equally outstanding. He gave up only seven hits, including Kramer’s home run, and one walk. A week later, though, Kramer would get his revenge over Lopat when the Browns shut out the Sox, 9-0, at Sportsman’s Park.

For the Browns, this game was one they could not afford to lose. It was the team’s 15th loss in 21 games and it moved the Browns into third place for the first time since mid-May, percentage points behind the surging Tigers and still one game behind the Yankees. Eventually, the Browns righted the ship and clinched the American League pennant by a game over the Tigers.

For the White Sox, the win was only their sixth in the last 20 games. The team finished in seventh place, but the emergence of Eddie Lopat gave White Sox fans hope that there would be more victories like the one they were celebrating.

6 Browns manager Luke Sewell offered this sobering assessment of his team on the eve of the White Sox series: “The team is likely to continue to make errors and its batting attack is not the strongest in the league.” Donald H. Drees, “Browns in Chicago to Resume Drive for Pennant Tonight,” St. Louis Star-Times, September 7, 1944, 21.

7 A St. Louis sportswriter claimed, perhaps with a bit of hyperbole, that Kramer’s home run was “one of the longest of the Comiskey Park season.” “Browns Lose.”