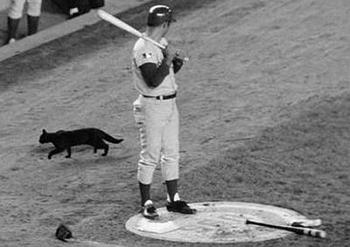 During their first decade, the Mets were known more for their losing than winning. When Gil Hodges was hired as their manager in 1968, things began to turn around. Hodges turned the perennial losers into a lovable bunch of underdogs who would eventually win the 1969 World Series. In the minds of many fans, the season turned around on the evening of September 9, 1969 when a black cat ran in front of the division-leading Cubs dugout as they played the Mets at Shea Stadium.

The Cubs were leading the NL Eastern Division by a slim 1½ games over the Mets. For many Cubs fans, this was going to be the year that would end their misery. The Cubs had led their division for most of the season. But when they arrived at Shea Stadium on September 8 to start a crucial two-game series with the Mets, they were clinging to a 2½-game lead over the Mets. After losing the first game, 3-2, the Cubs badly needed a win to retain first place.

Both teams sent their aces to the mound. Ferguson Jenkins of the Cubs had a 19-13 record but finished the season with just two more wins. Mets pitcher Tom Seaver had a 20-7 record and would collect four more wins before the end of the season on his way to his first Cy Young Award.

After Seaver retired the first three batters in the top of the first, the Mets jumped on Ferguson Jenkins for two runs in the bottom of the first. Jenkins walked the first and third hitters, Tommy Agee and Cleon Jones, while getting the second batter in the lineup, Wayne Garrett, to line out to shortstop. A sharp hit back to the mound by Art Shamsky moved up both runners when Jenkins only play was to first base. The fifth batter, Ken Boswell, hit a double to right field that scored both Agee and Jones. Donn Clendenon was called out on strikes to end the inning but the Mets had two runs, enough to eventually win the game.

The incident that earned this game a place in baseball lore happened in the top of the fourth inning. The Cubs put themselves in a good position to score a run after Glenn Beckert hit a double to center field. With Billy Williams at the plate and Ron Santo on deck, the game was interrupted when a black cat showed up on the field. The cat walked behind the on-deck circle where Santo was standing and then paraded in front of the Cubs dugout before disappearing under the stands. Ron Santo said in an MLB article that appeared years later that the cat “looked right at [Cubs manager] Leo [Durocher] and went underneath the stands.”1 No one thought much about it at the time. The Mets’ Ed Kranepool said that cats were frequently found at Shea since “we had a lot of rats there.”2 After the cat disappeared, the game continued. The Cubs scored their lone run of the game when Santo singled in Beckert.

Seaver pitched impressively that night, keeping Cubs batters out of scoring position. He had five strikeouts and lowered his ERA to 2.43.

The Mets added to their lead when they scored two more runs in the bottom of the fourth inning. Donn Clendenon hit a two-run homer to extend the Mets lead as Ferguson Jenkins continued to struggle against the Mets hitters.

After this game, the Cubs were a half-game ahead of the Mets after having a commanding eight-game lead on August 19. The Cubs continued their losing ways, eventually running up a record of 8-17 in September, while the Mets were 23-7. The Mets clinched the division on September 24.

Lots of reasons have been offered over the years for the Cubs’ swoon. They still played all of their home games during the day, and some fans blamed the Midwestern heat for wearing the Cubs down. Others say that Leo Durocher played the veteran players too often, and his failure to give them a rest led to the team’s late-season collapse. Still other fans blame it on the trade of Joe Niekro for Dick Selma. Niekro went on to win 211 games during his 20-year career. Selma went 0-5 during their season-ending breakdown. But all of these reasons are just conjecture, as is the “black cat” incident, perhaps being the most interesting one of all.3

In addition to the sources cited in the Notes, I also used the Baseball-Reference.com, Baseball-Almanac.com, and Retrosheet.org websites for box score, player, team, and season pages, pitching and batting game logs, and other material pertinent to this game account.