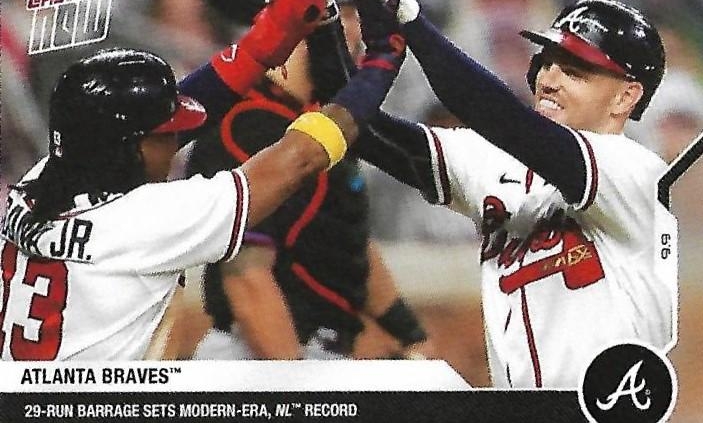 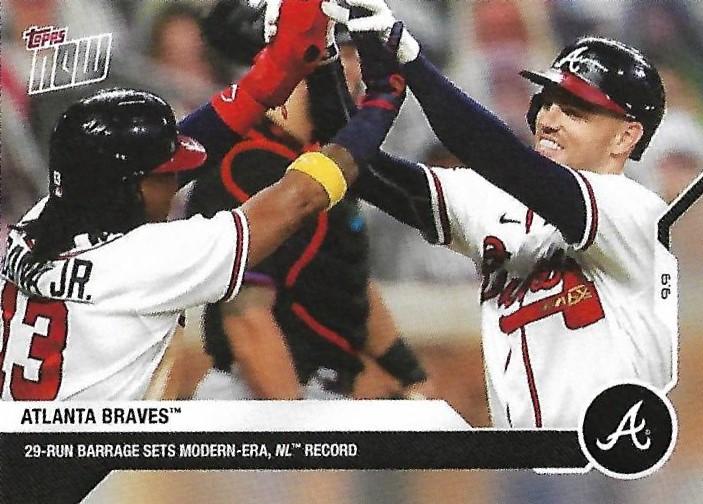 At least one statistical analysis has concluded that a baseball team scoring nine runs has a 90 percent probability of winning the game.1 This game falls firmly in the other 10 percent. A number of records fell during this epic rout. Indeed, the Atlanta baseball team outscored the Atlanta pro football team that week!2

Certainly the Braves (24-18, leading the NL East) were familiar with high-scoring games. They had already scored double digits seven times in their first 42 games in the pandemic-shortened season. The Marlins (19-18, third place in the division, but only 2½ games behind the Braves) had three double-digit games to their credit and had beaten the Braves 5-4 and 8-0 in the first two games of this series. The temperature was a pleasant 83 degrees, so the number of balls flying out of the ballpark should not be blamed on the weather.3

The Marlins were hoping starter Pablo López (3-3, 3.05 ERA) could cover a lot of innings in this game. Due to COVID 19-delayed games, they were facing 15 games in the next 11 days, so their bullpen was likely to be stressed by the four doubleheaders.4

López and Braves starter Tommy Milone5 (1-4, 5.30 ERA) each allowed one baserunner in the first inning, but neither scored.

Garrett Cooper doubled to open the second inning for the Marlins. Milone struck out Lewis Brinson and Monte Harrison, but the third out proved difficult. Jorge Alfaro singled in one run. Jazz Chisholm notched his first career RBI with his first triple, off the bullpen fence, giving Miami its only lead, 2-0.

Dansby Swanson led off the bottom of the second with a single. López walked Austin Riley and Adam Duvall. Ozzie Albies, returning after a month on the injured list, grounded to first, scoring the first Atlanta run. Ender Inciarte hit a deep fly, allowing Riley to score to tie the game, but not before a tag play at third on Duvall. The umpire called him safe. Miami manager Don Mattingly challenged whether Duvall’s foot was in before the tag, but the safe call was upheld. In an alternate universe, Duvall would be out and Miami would have held their 2-1 lead, but in this one the inning continued – for a total of 42 minutes and 11 Atlanta runs!

That was all for López; Jordan Yamamoto took over the pitching duties with the bases clean and still two out. Swanson singled, stole second, and scored on Riley’s single. Duvall hit the first pitch into the bullpen, giving Atlanta a 10-2 lead. Albies battled for nine pitches and hit the ninth one well into the seats in center. Pitching coach Mel Stottlemyre Jr. paid a mound visit, which apparently paid off: Inciarte grounded to first to finally end the inning with the score 11-2, Atlanta.6

After the 42-minute wait, Milone retook the mound. He should have been used to it: 10 days earlier, in his first start after being traded to the Braves, he sat through a 10-run top of the second (although he pitched only 1⅓ innings after that wait).7 Brian Anderson hit a two-out single and Cooper walked. Brinson brought them both home with a home run that bounced up the steps to the concourse in the center-field stands. Harrison struck out, but the Marlins had made a dent in the lead: 11-5, Braves.

Freeman made some personal history in the bottom of the third. After Acuña singled, Freeman lined his 1,500th hit, a home run into the first row of seats in right. Since there were no fans in the stands, it was easy for the Atlanta staff to retrieve the ball for him. Yamamoto got two strikeouts and a groundout to end the inning, but Atlanta had a 13-5 lead.

The Marlins continued the scoring fest in the top of the fourth. With one out, Chisholm hit his first major-league home run. Rojas singled, Starling Marte walked. That was all for Milone, but his replacement, Grant Dayton, wasn’t able to keep the Marlins down. Jesús Aguilar’s double off the right-field wall scored Rojas; Anderson’s sacrifice fly scored Marte. Cooper flied out, but the score was now 13-8, Braves.

The Braves got those three runs back in the bottom of the frame. Two walks and a single loaded the bases with two outs for Freeman, who worked the count full and then hit a smash toward Chisholm, playing straightaway at second. Acuña, running from first on the pitch, leapt over the ball, which bounced off Chisholm into short center field. The first two runners scored easily. As the fielders converged on the ball, Acuña glanced back to see their location and decided to run through third-base coach Ron Washington’s stop sign. His decision worked out: The throw in from center bounced off the dugout fence. It was scored a double and three RBIs for Freeman. 16-8, Atlanta.

Dayton pitched a clean top of the fifth, the first such inning for either team.

The bottom of the fifth did not feature another multiple-RBI hit by Freeman. It did, however, feature two three-run homers, by Duvall and Acuña. Yamamoto8 gave up the first one, Alex Vesia the second. Inciarte finally got a hit (a single before the second homer), so every member of the Braves had at least one hit. With the score now 22-8, the Braves had broken their record for most runs scored in a game since moving to Atlanta in 1966.9

Bryse Wilson took over the pitching for the Braves in the top of the sixth, and he, too, managed a clean inning.

Vesia continued pitching in the bottom of the sixth, walking two before getting two strikeouts. Inciarte singled to load the bases. That triggered a pitching change to Josh A. Smith, who gave up a bases-clearing double-plus-error10 to Acuña to bring the score to 25-8, Atlanta. Acuña had now reached base safely in each of the first six innings – the first time in major-league history anyone had achieved that particular feat.11 Freeman grounded out to end the inning.

Despite being behind by 17 runs, Miami did not give up. The Marlins loaded the bases with one out in the top of the seventh on a single and two walks. They managed to score one run on a Jorge Alfaro single, giving them their nine runs for the game.

The Braves were not done scoring either. D’Arnaud hit a one-out single in the seventh, Swanson was hit by a pitch, and Riley singled. Duvall hit his third homer of the game, 450 feet, 20 rows into the seats, where it bounced off a column in the upper concourse.12 Smith got two lineouts to end the inning, but with 29 runs, Atlanta had set a new record for scoring by a National League team.13

Duvall also set some personal records: This was his second career three-homer game, an achievement not matched by either of the Braves’ greats Hank Aaron and Chipper Jones.14 He also had nine RBIs in the game, the first time a Braves position player had nine RBIs.15

Duvall’s third homer also set a team record. In all of Braves history, including Milwaukee and Boston, they had never hit seven home runs in a home game – until this game.16

In the recorded history of major-league baseball, this was the first game to end with the score 29-9.18 Taking advantage of nine walks and a hit-by-pitch, Atlanta managed to score 29 runs on only 23 hits. At 4 hours and 14 minutes, it was Atlanta’s longest nine-inning game of 2020 – by one minute.19

One more unusual factoid from this game: Neither team had a position player pitch, which is surprising given the score and Miami’s need to conserve its bullpen.

Atlanta and Miami faced each other four more times in the regular season, with the Braves taking three of four (outscoring them 27-13). They also faced each other in the NLDS. Again, the Braves won three games, which was enough to win the five-game series. The Braves’ season ended when they lost the NLCS to the Dodgers, 4 games to 3.

3 Maybe it was something about the day. The Brewers beat the Tigers 19-0 that afternoon.

4 Under the COVID-19 rules applicable to 2020, doubleheaders were only seven innings, so that would lower somewhat the number of innings the bullpen would need to cover.

5 This was Milone’s final appearance for Atlanta in 2020. They released him at the end of the season.

7 He gave up only one run in the inning following his long wait, but was pulled with one out in the bottom of the third after he was charged with six runs. The Braves held on to beat the Phillies, 12-10, but he was not the winning pitcher in that game either since he had worked only 2⅓ innings.

10 The throwing error was by Alfaro, a catcher who was making his first major-league appearance in right field. He had appeared in over 1,000 professional games and this was his first time in the outfield.

12 The Atlanta staff did manage to track down the ball. That was shown later in the broadcast. Given the COVID-19 protocols, the staffer picked it up with gloves so the ball wouldn’t have to be quarantined.

14 Aaron and Jones each had one three-homer game.

15 The only other nine-RBI performance in Braves history was by a pitcher, Tony Cloninger, on July 3, 1966.