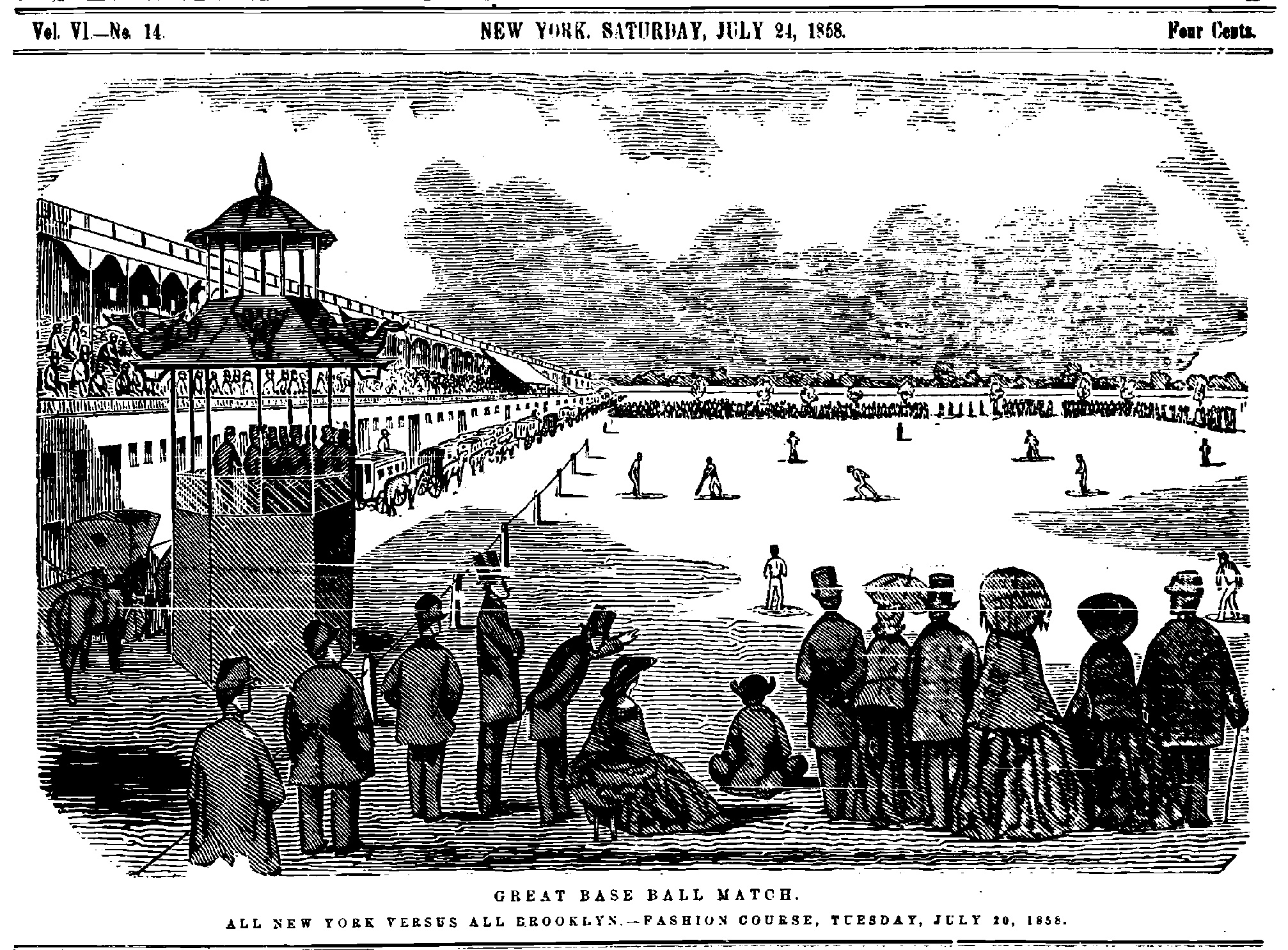 The baseball rivalry between Brooklyn and New York, made famous when the Yankees and Dodgers played six World Series in ten years, actually dates to 1858, when the presidents of the Brooklyn base ball clubs challenged their New York counterparts to “a friendly match game of base-ball” between selected nines from the two cities. Since the participants were chosen or “selected” from multiple clubs in their respective cities, the matches were, in effect, the first all-star games. Played at the Fashion Course Racetrack near today’s Citi Field, the best-of-three series also marked the first New York area contests played on enclosed grounds; in turn this facilitated another innovation, the first documented admission charge.[fn]Schaefer, Robert H. “The Great Base Ball Match of 1858: Base Ball’s First All Star Game,” pp. 47-66; Nine: A Journal of Baseball History and Culture, Volume 14, Number 1, Fall 2005; Brooklyn Daily Eagle, July 10, 1858; Porter’s Spirit of the Times, June 12, 1858. Brooklyn was an independent city until January 1, 1898.[/fn]

As the game began, the odds offered by gamblers favored the Brooklyn team. This seemed to be confirmed by the early going. The Brooklynites led 3-0 after one inning, 5-1 after two and 7-3 going to the bottom of the fourth before New York rallied to tie things at 7-7. Brooklyn briefly regained the lead by scoring four times in the top of the fifth, but New York scored seven times in the bottom of the inning, taking a lead it wouldn’t relinquish. New York led 22-18 after eight innings and any hopes of a Brooklyn ninth-inning comeback were quickly dashed by “three brilliant catches” that “did their [Brooklyn’s] business.”[fn]New York Daily Tribune, July 21, 1858; New York Times, July 21, 1858; New York Clipper, July 24, 1858.[/fn]

New York’s pitcher, Theodore Van Cott, helped his own cause by scoring four times, with Hoyt (4 runs), Pinckney (3), Benson (3), and Wadsworth (3) also contributing offensively. Future Hall of Famer Harry Wright was, however, shut out. Van Cott threw 228 pitches, incredible by today’s standards, but was topped by Brooklyn’s Mattie O’Brien, who threw 264 pitches in only seven innings. Future Brooklyn great Joe Leggett scored only once and was replaced at catcher after he lost “two balls in succession.” Leggett’s poor performance led to his removal from the lineup for the rest of the series. Clearly the Excelsiors had fallen from grace as the other two members of the club were also dropped. Two more Atlantics were added for the second contest, including another future star, Dick Pearce, at shortstop. Like Leggett, Harry Wright was dropped from the lineup and didn’t appear again in the series.[fn]Brooklyn Daily Eagle, July 21/August 18, 1858; New York Daily Tribune, July 21, 1858; Porter’s Spirit of the Times, July 24, 1858.[/fn]

By the time of the August 17 rematch, some of the excitement had worn off, as evidenced by a somewhat smaller crowd. If there was less excitement, there was even less drama as Brooklyn was in complete charge. A porous New York defense helped. With two out in Brooklyn’s first and one run in, two fielding errors followed by some overthrows led to five more runs. With Brooklyn ahead 11-3 after three innings, further overthrows “too numerous to mention” contributed to six more runs for a 17-3 lead on the way to a 29-8 victory.[fn]New York Times, August 18, 1858; New York Daily Tribune, August 18, 1858, Brooklyn Daily Eagle, August 18, 1858.[/fn]

Not surprisingly, Brooklyn decided to stay with a winning combination after its easy second-game victory. The one substitution (Borum for Masten at catcher) was described as being due to the latter’s “unavoidable absence.” Masten’s loss was described as putting the New York players “in fine feather.” For its part, New York made wholesale changes, replacing two-thirds of the second-game lineup. Pitcher Van Cott was replaced by Dick Thorn; Van Cott reported being injured and didn’t want to “risk the match.”[fn]New York Times, September 11, 1858; Porter’s Spirit of the Times, September 18, 1858.[/fn]

As in the first two games, Brooklyn took an early lead in the September 10 contest, but New York answered with a seven-run first and led 15-6 after six innings. Brooklyn tallied four times in the seventh to close the gap to five runs, but New York matched that with five of its own in the bottom of the inning. The match ended with a 29-18 New York victory. New York’s optimism about Masten’s absence was apparently well-founded, as his replacement allowed 8 passed balls.[fn]Schafer, Robert H. “The Great Base Ball Match of 1858,” Nine; New York Times, September 11, 1858.[/fn]

The immediate result of the Fashion Course games was a New York triumph. As important as the result was at the time, the series had an even more important influence on base ball’s long-term development. The public’s willingness to pay to watch this relatively new game provided the most tangible proof possible of base ball’s growing popular appeal. The matches also marked the formal beginning of one of the most intense rivalries in sports history. Base ball competition between Brooklyn and New York took many forms, but for more than 100 years it provided great passion and drama. The Fashion Course games also marked a transition. While New York won the series, the Brooklyn teams would dominate the sport for the next decade and more. The difference was more than geographic. For the most part the Brooklyn clubs consisted of workingmen, very different from teams like the Knickerbockers, who were not “from the world of physical toil.” To some degree, the 1858 matches were the last hurrah of gentlemanly organizations like the Knickerbockers, Eagles, and Gothams. By winning, the New Yorkers honored their historic contributions. By agreeing to play against men from a different social class, they also contributed to baseball’s future expansion and popularity.[fn]Schafer, Robert H. “The Great Base Ball Match of 1858,” Nine; Ryczek, William J. First Inning: A History of the National Game Through the Civil War (Jefferson, North Carolina, McFarland & Co., 2009), p. 44.[/fn] 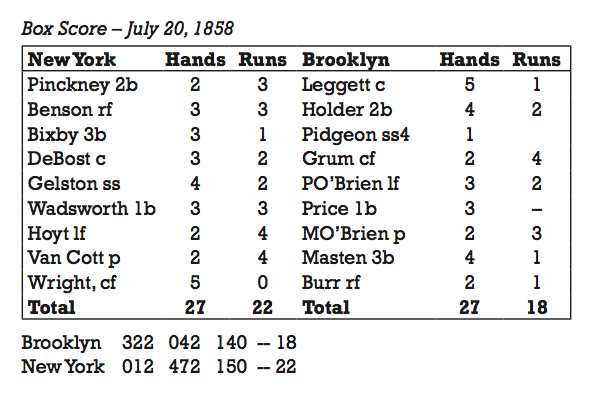 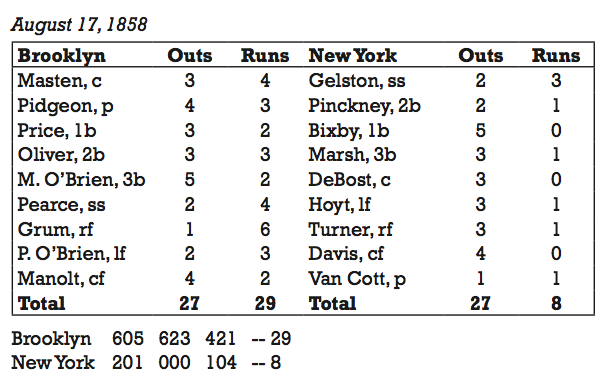 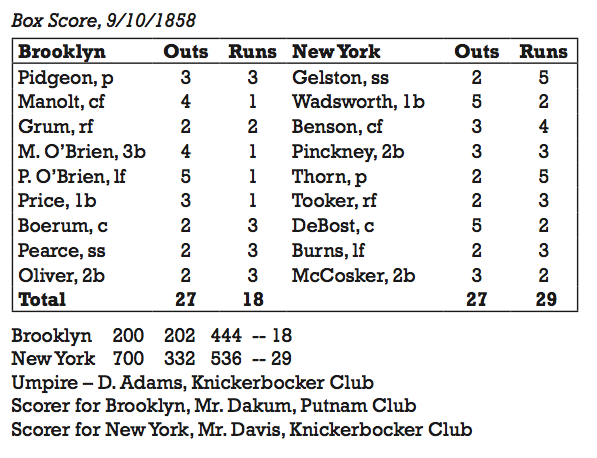