This article was published in Baseball’s 19th Century Winter Meetings: 1857-1900 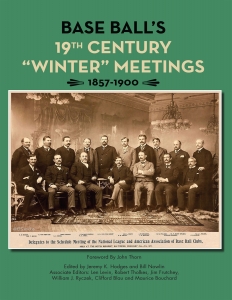 The 1872 National Association season had been disappointing, plagued by uneven competition, disbanded teams, and rumblings about dishonest play. Five of the 12 teams that began the year dropped out due to financial troubles, which perhaps was for the best, since they could not play competitively with the top clubs.

In June, a game between the Athletics of Philadelphia and the Baltimore Club had come to a premature end due to a dispute over an umpire’s call. Throughout the summer and fall, there were rumors of fixed games, and virtually every upset stirred suspicion that gamblers had dictated the outcome. Near the end of the season, William Cammeyer, the proprietor of Brooklyn’s Union Grounds, attempted to renew flagging interest by staging a tournament, which proved a colossal artistic and financial failure. By October it was widely conceded that the NA’s second season had itself been a failure.

Everyone agreed that there were problems, but there was no consensus on a remedy. Prior to the annual convention, journalist Henry Chadwick, at the suggestion of NA President Bob Ferguson, drafted a formal constitution and bylaws, a nice parliamentary touch but not a solution to the troubles that plagued the fledgling league. Constitutions and bylaws establish an operational process, but it is the execution of that process and the people responsible for that execution that determine the effectiveness of the organization.

For example, Section 2 of the proposed constitution set forth the method by which a new applicant was to be evaluated and approved for admission to the Association. At least 10 days prior to the annual convention, each applicant was to submit a written document setting forth the name of the club, its officers, and the location of its proposed playing field. If at least two-thirds of the convention delegates voted in favor of the application, the club became a member of the NA.

The process was clear, but the method by which the delegates were to judge the fitness of new applicants was not specified, nor was there any required proof of financial capacity beyond the $10 admission fee. Perhaps the greatest weakness of the NA had been the admission of organizations that lacked the financial strength to field competitive teams or even to make it through the season. The tribulations of 1872 should have been a signal to make the criteria more stringent, but lessons were learned slowly or sometimes not at all in the NA.

The key to cleaning up many of the NA’s problems, especially those regarding suspected gambling influences, was an effective Judiciary Committee. The final section of the proposed bylaws concerned the manner in which matters could be brought to the attention of the committee and the process by which the committee was to adjudicate disputes. The processes were fine, but in any organization, the difficulties arise from the motives and abilities of the people administering the process. In a competitive activity like baseball, members of the NA Judiciary Committee often had a clear partisan bias in the matter at hand, and none felt compelled to abstain from voting due to a conflict of interest.

With his drafts of the constitution and bylaws submitted, Chadwick looked forward to the convention, which he felt would be attended by good men “who will do their best to restore the lost prestige of square and honest play in the professional arena which the proceedings of last October [presumably the rumors of fixing and the failed tournament] did so much to destroy.”1

The good men who met at the St. Clair Hotel in Baltimore on the evening of March 3, 1873, were:

The Maryland, White Stocking, and Resolute clubs were new organizations seeking admission, and each application was duly approved by the requisite two-thirds vote, without any serious debate. The White Stocking Club had strong financial backing and a roster of talented players, but the Marylands and Resolutes were lacking in both respects. The Resolutes had a few good players but a weak organization, while the Marylands were deficient in nearly every way. Had the delegates seriously and responsibly evaluated the strengths and weaknesses of the three applicants, they would have rejected the latter two.

President Ferguson called the meeting to order at 8:30 P.M. He acknowledged the shortcomings of his league and correctly pointed out that legislation alone would not “restore the national game to its old status of fair and honorable playing.”3 Ferguson, a scrupulously honest and often blunt individual, said that the solution to the NA’s difficulties lay not primarily with the league but with the management of individual clubs. There were many players who had questionable reputations, but there was always a job for a man with talent, no matter what his previous transgressions. The best-intentioned rules would be useless if clubs continued to hire men who repeatedly flouted those rules.

After Ferguson’s remarks, Harry Wright took the floor and moved the approval of the constitution and bylaws, with only minimal changes from the versions suggested by Chadwick, as the latter pointed out proudly. Hicks Hayhurst, chairman of the Judiciary Committee, reported that the only complaint made to his committee was in regard to the aforementioned Athletic-Baltimore contest, which had subsequently been settled amicably.

Given all the tribulations that plagued the NA in 1872, one must wonder why no other business had been brought to the attention of the Judiciary Committee, either concerning “the proceedings of last October” or events that created the need “to restore the national game to its old status of fair and honorable playing.” The NA is not the only professional baseball league to have looked the other way while transgressions took place before their collective eyes. There were numerous rumors of game-fixing prior to the Black Sox scandal, and nearly a century later, the use of performance-enhancing drugs was rampant long before baseball’s hierarchy began to take action.  But while the NA was not the first league to stick its head deep in the sand, it was a new and relatively unstable organization, and its continuing inaction did not bode well for its survival.

The next item on the agenda was the election of officers. Ferguson was re-elected president, newcomer Garrigan of the Resolutes was chosen as vice president, Nick Young of Washington, who was employed by the US Treasury Department, once again agreed to serve as secretary, and Harry Wright was selected as the league’s treasurer.4  After the officers were chosen, Ferguson appointed a Championship Committee consisting of Wright, McBride, and Hayhurst, and a Judiciary Committee of himself, Hall, Smith, Young, and Garrigan.

The schedule of games was not an item of discussion for the delegates; it would evolve over the course of the season through correspondence between the secretaries of each club. The only duty of the convention was to determine the number of games every nine must play against each of the other teams. The quota was set at nine, despite a request by Garrigan of the Resolutes to lower it to seven.5

For the first time, the NA adopted an official ball, selecting, upon the motion of Smith, the Ryan ball. Ryan and Harvey Ross had been manufacturing baseballs since the 1850s, and had a good reputation for producing a reliable product. Introducing a standard baseball was an attempt to avoid the controversies of previous years, when clubs delayed the start of games with their arguments over whether to use a lively ball or a dead ball. There was a significant difference, and the use of one or the other had a great impact on the game. A dead ball favored the better defensive team, while hard-hitting, poor-fielding clubs wanted a lively ball, which was difficult for even skillful fielders to handle and negated the advantage of a good defensive team.

The Ryan ball was less lively than most, and more likely to lead to the lower-scoring games that Chadwick considered the mark of superior play. Once the season began, however, it appears that teams did not use the Ryan ball exclusively, and no team was penalized for using a ball of a different make as long as it conformed to the rules regarding size and weight.

The only significant rule change adopted at the convention was to prohibit players from catching the ball in their hat. If they did so, the batter and each baserunner were entitled to advance one base. Hall of Baltimore proposed the elimination of the fair-foul hit, a maneuver in which a batter reached safely by chopping a ball in front of the plate and having it roll into foul territory before it reached first or third base. “The convention wisely refused to adopt the suggestion,”6 Chadwick reported, for he considered fair-foul hitting to be part of the scientific style of batting he greatly admired.

With the meager business of the convention concluded, the delegates adjourned, with plans to meet in Boston the following year. Smith and Garrigan, however, would not be in Boston, for their clubs failed to make it through the 1873 season. The NA would survive the year, which meant another convention and new challenges to be faced at Boston’s United States Hotel in March 1874.

2 In some sources, the surname is spelled “Garrighan.”

3 New York Clipper, March 8, 1873. The article in the March 8 Clipper is the best source of information on the convention. Every other article I located appeared to be a condensed version based upon the information contained in the Clipper.

4 There is no mention of Young attending the meeting, or of a Washington team having a representative, but he was elected secretary in absentia and his Washington nine played in the NA in 1873.

5 Garrigan’s Resolutes wound up completing only 23 of the 72 games they were supposed to play, but no team fulfilled its entire quota. Boston played 60 games, the most of any team.